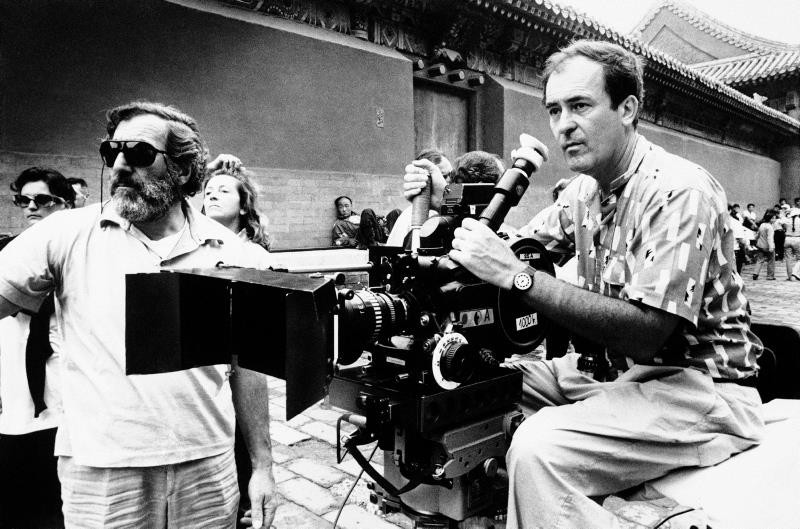 In this May 2, 1987 file photo Italian movie director Bernardo Bertolucci, right, checks a scene during the filming go the movie ,The Last Emperor,, in the Forbidden City of Beijing, China. (AP Photo)
by Compiled from Wire Services Nov 26, 2018 12:00 am

Bertolucci's press office, Punto e Virgola, confirmed the death in an email to The Associated Press. Italy's state-run RAI said Bertolucci died at his home in Rome, surrounded by family. He had been wheelchair-bound for several years.

The self-professed Marxist also did not shy away from politics and ideology, as in "The Conformist," which some critics consider Bertolucci's masterpiece.

Despite working with A-list American and international stars, Bertolucci always defended his own film-making style against what he said was the pressure of the U.S. film industry. He maintained critical success for most of his career, weathering the controversies that his sexually provocative work would stir and some commercial flops.

"When it comes to commercial cinema, I have the strange pleasure of feeling that I'm from another tribe, an infiltrator," he told Italian daily Corriere della Sera in 1990.

He was honored for lifetime achievement at the Cannes film festival in 2011.

Bertolucci's movies also bore the imprint of the director's own experiences in psychoanalysis.

He always said that making films was his way of communicating with the audience. It was his personal language.

"Maybe I'm an idealist, but I still think of the movie theater as a cathedral where we all go together to dream the dream together," he said upon receiving an award from the Director's Guild of America for his 1987 film "The Last Emperor."

That movie handed Bertolucci his greatest success. In 1988 it won all the nine Academy Awards that it had been nominated for — including best movie and best director. Bertolucci was the only Italian ever to win the Oscar for best film.

The movie — the first Western feature film to win permission to shoot in Beijing's Forbidden City — follows the life of China's last emperor, from child-king at the end of the Qing Dynasty to war criminal and finally to an ordinary citizen in the People's Republic.

It was filmed in the lush and vivid style that was one of Bertolucci's trademarks. It featured grandiose scenes and intimate moments, and a flashback structure that is typical of biopics.

Cinematographer Vittorio Storaro, who often worked with Bertolucci and won one of his three Oscars with "Last Emperor," compared the director to William Faulkner.

"His style is not unlike that of Faulkner who'll go on for 30 pages without a period. Bernardo doesn't just use the camera to convey just one sentence. Everything flows into everything else," said Storaro.

Bertolucci was born in the northern city of Parma on March 16, 1941, the son of poet Attilio Bertolucci and his wife Ninetta. The family moved to Rome when Bertolucci was 13.

Bertolucci was married to the English writer and director Clare Peploe. They had no children.

Punto e Virgola, the press office, said details of funeral plans are not yet finalized but that it expects a ceremony in the next few days.

Former festival president Gilles Jacob said he was saddened by the death of "the last emperor of Italian cinema, the lord of all epics and all escapades."

"The party is over: it takes two to tango," Jacob told AFP.

When asked in 2013 how he would like to be remembered, Bertolucci told AFP: "I don't care."

"I think my movies are there, people can see them," he said at a presentation of a 3D version of "The Last Emperor" to mark the 25th anniversary of its international release.

"And sometimes I laugh, thinking I will be remembered more as a talent scout of young girls than as a film director," he said.

The list of starlets he discovered includes Dominique Sanda in "The Conformist" in 1970s, the passionate Schneider in "Last Tango in Paris" (1972), Liv Tyler in 1996's "Stealing Beauty" and Eva Green, who made her screen debut in "The Dreamers" in 2003.