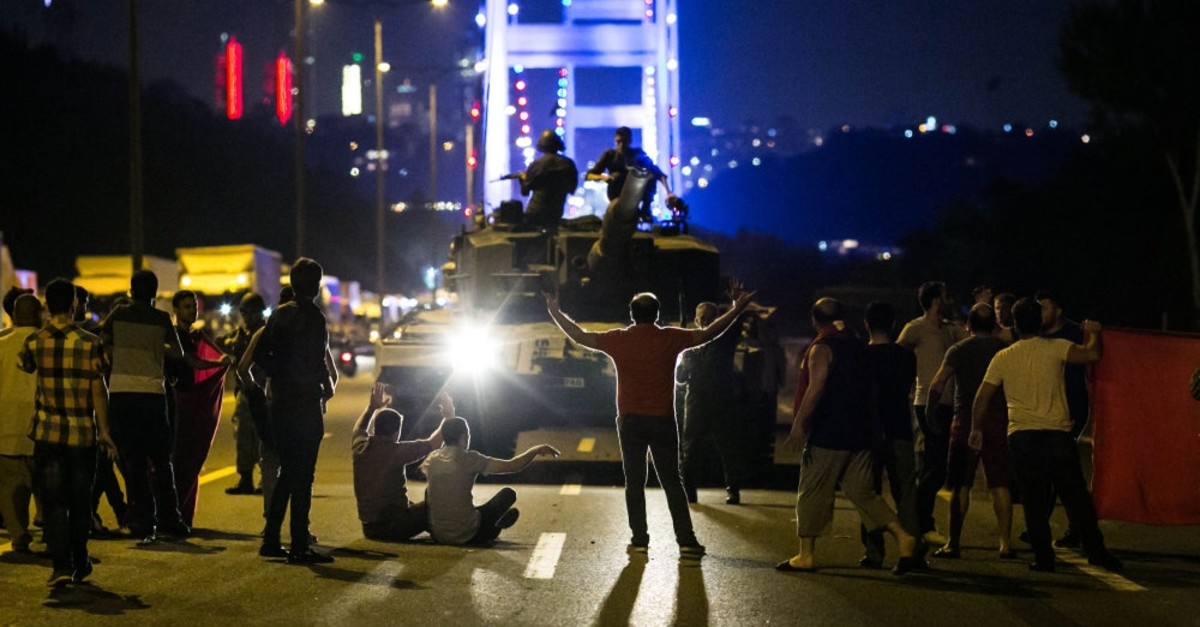 People take over a tank near the Fatih Sultan Mehmet Bridge during resistance against the deadly FETu00d6-led coup attempt on the night of July 15, Istanbul.
by Kerem Alkin Jul 13, 2019 1:25 am

The Cold War period that emerged after World War II accompanied problematic structures where civil and military bureaucracy gathered excessive power, and the elected governments in countries were often forced to overcome the bureaucracy in their political structures, which were supposed to be based on national will. This also led to the disruption of the global economy's development and slowed down the development process of democracy on a global scale.

In the aftermath of the Cold War, countries put forward intense effort to create processes that would ensure the full participation of the people in democracy through economic and democratic reforms on behalf of the manifestation of the national will. There were also processes in which the bureaucracy resisted to maintain power to the extent that the reforms accelerated. This delayed the formation of a structure in which the private sector dominated and small and medium-sized enterprises (SMEs) stood out in the Turkish economy.

During the Cold War period, Turkish democracy faced interruptions every 10 years due to coups. The problems with political stability negatively affected the development of the Turkish economy. When it came to the early 1980s, we had an economy that exported just $3 billion in goods to the world. It was an economy that had fewer beds in the tourism sector than the U.S. state of Rhode Island, and 65 percent of that was dominated by the public sector. The 1994 and 2001 economic crises caused the per capita income, which had risen to $3,000 as a result of ceaseless efforts, to drop twice to $2,000. And throughout the 1990s, Turkey experienced a period in which it lost its economic and political self-confidence. The bar has been brought to a higher point with reforms that have been launched over the last 17 years in which the Justice and Development Party (AK Party) has been in power alone since 2003. And the leap in Turkey's global perspective has enabled us to regain our confidence in economics and politics.

This has riveted Turkey's power as a major player in Eurasia and its position of being a country that would change the fate of Eurasia. And Turkey, with its people, business world and government, has achieved this success by eliminating numerous operations and vast treachery. The coup attempt schemed by the Gülenist Terror Group (FETÖ) on the night of July 15, 2016 was the wildest, bloodiest and cruelest of the operations aimed at Turkey's unity, solidarity, and political and economic stability. The coup plotters perhaps hoped that the Turkish community, who had not been able to stop military coups previously, would not effectively react to this bloody, brutal coup attempt and the attempt to drag Turkey into a civil war on the night of July 15. However, the basic fact ignored by the masterminds of this treacherous plot was that the Turkish public, which embraces democracy and economics with consolidated confidence, has the strength to conduct heroism and in the end, were clearly able to show they are the true owners of this country.

Today, the Turkish business world dominates 75 percent of the Turkish economy, produces three times more added value than 15 years ago and exports $180 billion in goods and $50 billion in services to the world. With the awareness that the democracy they have strengthened is the only hope for transformation in Eurasia, Turkish people, young and old alike and from all walks of life, poured into the streets and stopped tanks and fighter jets with their faith and the indisputable power of the national will. They staged an unprecedented epic of world politics and a struggle to embrace democracy.

The effective participation of businesses in the economy through nongovernmental organizations, the transformation of the Turkish economy in mental, institutional and sectoral aspects based on the market economy, the change in the training and production skills of employment and the determination of the public sector to withdraw from production and the market through successful privatization have all strengthened Turkish society's skill and perception of being the owner of the Turkish economy.

The fortified confidence accomplished through the democratization of the economy gave the Turkish people the motivation to stop the coup attempt without hesitation on the night of July 15 in the name of protecting national sovereignty, national will and the national economy and for protecting the economic success that has brought critical improvement to the living standards of Turkish people.

On the morning of July 16, 2016, Turkey woke up to an era in which national will dominated all the processes and no one from inside or outside would dare interfere in the future and destiny of Turkey ever again. We have launched the presidential system to reinforce and institutionalize Turkish people's epic struggle, to support their success in embracing democracy and to transform Turkey's rise over the last 17 years based on the national route and economic independence into a country ready to change the destiny of Eurasia.

This has paved the way for a mental transformation befitting the 21st century in the executive, legislative and judicial branches, the three main pillars of democracy. This transformation will weave a new culture of doing business based on corporate governance principles into the fabric and genetics of the country. A solution-oriented and performance-based future is being built that will highlight accountability and make Turkey focus on high added value. All global power centers will aspire for enriched cooperation with such a strong Turkey.

Kerem Alkin is an economist, professor at Istanbul Medipol University. He currently serves as the Turkish Permanent Representative to the Organisation for Economic Co-operation and Development (OECD).
RELATED TOPICS