Statesman Mohammed Morsi will not be forgotten 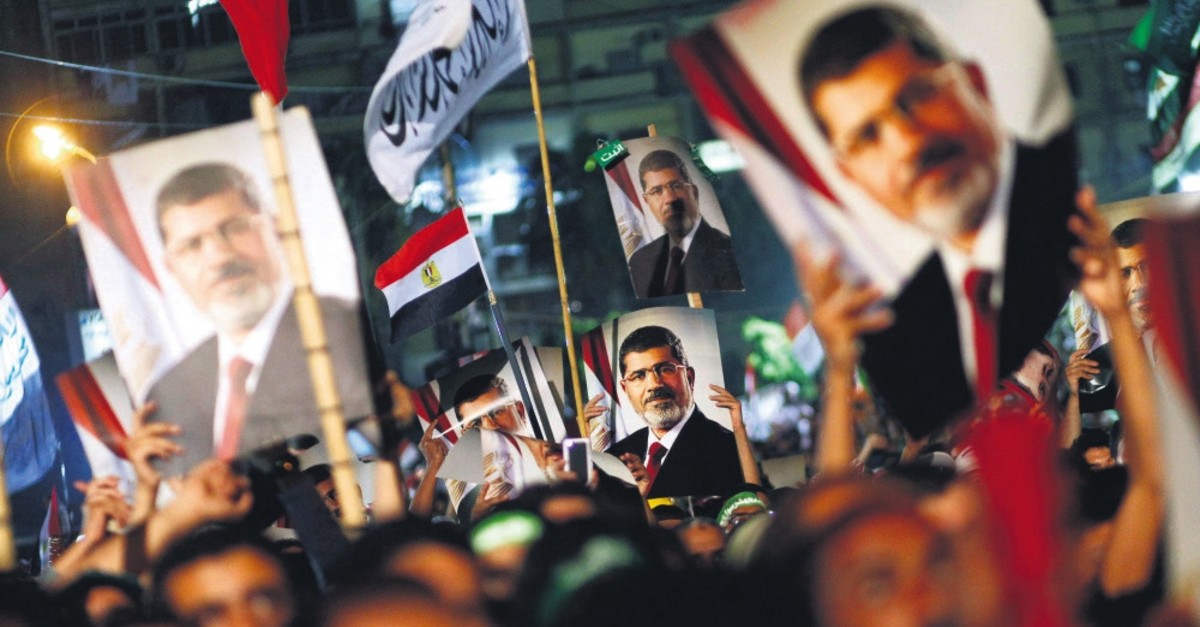 People hold the portrait of ousted Egyptian President Mohammed Morsi during a rally against the military coup that overthrew Morsi and put him into jail, Cairo, Egypt. July 4, 2013.
by Muhittin Ataman
Jun 19, 2019 12:22 am

Mohammed Morsi, the first and only democratically elected president of Egypt, passed away on June 17. He was unable to resist the suppression of the Abdel-Fattah el-Sissi regime and suffered a heart attack during his defense in court. Everybody knows that he was isolated in jail, only able to see his family a few times over the past six years. Many observers claim that he was poisoned and that it had killed him gradually. These claims are yet to be confirmed; however, we all know that his death was not natural. The el-Sissi regime killed him, directly or indirectly.

Following his death, the regime declared a state of high alert across country and dispatched thousands of police patrols to squash any protests. Unfortunately, the regime forces did not give his body to his family to be buried. That is, the regime continued to violate basic human rights even after his death.

The election of Morsi as the president of Egypt and his government was the main indicator of the so-called Arab Spring and ousting him from power represented the beginning of the so-called "Arab Winter." He was part of the Muslim Brotherhood movement, the main carrier of the Arab Spring, which ended the long-time repressive regimes of the Arab world. After the February Revolution in 2011 and the collapse of the oppressive regime of Hosni Mubarak, the Brotherhood came to power after the first free and fair elections, and its candidate Morsi became the president of Egypt.

However, neither regional powers representing the tyrannical regimes in the Arab world nor their global supporters allowed the Morsi government to rule Egypt, the largest and by far the most important Arab country. After intense pressure from external actors, he was ousted by a military junta on July 3, 2013 and imprisoned after the coup. He was blamed for treason by those who betrayed their country and acted in the name of external powers. The el-Sissi regime tortured and mistreated him while he was in jail.

During the military coup, he was advised to escape to Turkey, but he refused to do so. Instead, he preferred to remain in the country and not leave his people alone in their struggle against the illegitimate forces supported by some Gulf states and Western countries. He knew he would suffer if he resisted the putschists, but he did not mind losing his life for the future of his country and for the continuation of the hope that his people had for complete self-determination. Hence, he chose to be an example not only for the Muslim Brotherhood and the Muslim ummah, which means "community," but also for all anti-imperialists and oppressed people on the global scale.

Who was responsible for his death? Who is to blame for his tragic end? There are three groups of actors who are directly or indirectly responsible for Morsi's death, and the political instability and economic vulnerability in Egypt. The first and the foremost responsible was el-Sissi and his accomplices in the government. El-Sissi broke the law, organized the coup, killed thousands of innocent Egyptians and imprisoned thousands of others. Second, the governments of some Gulf states first persuaded, then supported el-Sissi for the military coup. These regimes, which considered democratization an imminent threat to their regimes, provided human and financial resources to the el-Sissi government to form a repressive government in Egypt and to reverse the democratization process in the Arab world. The third group is the governments of other regional and global powers. While some countries gave diplomatic and political support to el-Sissi to conduct the military coup, others simply remained silent. Then, these countries normalized their relations with the el-Sissi government after the coup and did everything to legitimize the el-Sissi government on international platforms.

Then, what is the meaning behind Mohammed Morsi's death? I am sure that his death will be remembered as a significant milestone in the history of the Arab and Muslim peoples as well as the Middle Eastern region. He will continue to represent hope for the people of the Middle East, the right of self-determination and democracy. His buried body will represent the seed for the revival of Arab people and Muslims worldwide. His spirit will continue to haunt el-Sissi and his internal and external supporters. And since Morsi represents the hope and inspiration for them, Egyptians, Arabs, Muslims and anti-colonialists will never forget him.

His personality and policies are vast topics, but space is limited. In the end, as we usually say, "Inna Lillah wa Inna Ilayhi raji'un," which means: "To Him [Allah] we belong and to Him [Allah] we shall return."

May Allah help him rest in peace.