Libya's Haftar is an illegal actor backed by global powers 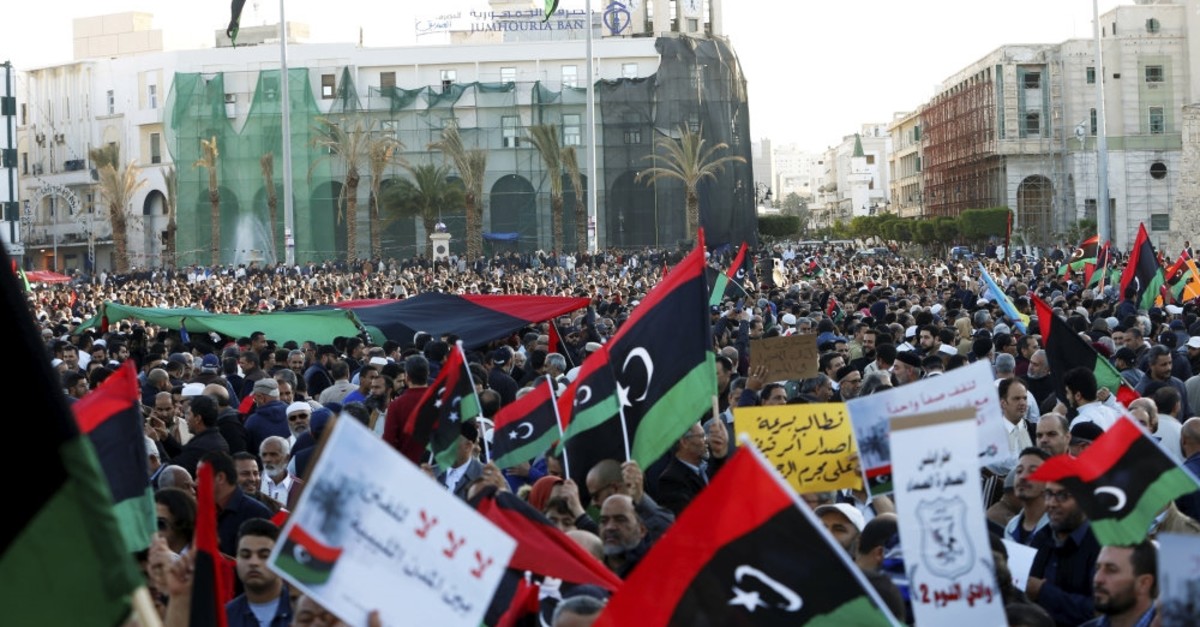 Protesters march during a demonstration to stand against Gen. Khalifa Haftar's armed offensive in Tripoli, at Martyrs Square in central Tripoli, Libya, April 12, 2019.
by Muhittin Ataman Jul 03, 2019 1:54 am

The Libyan crisis, which has come with a huge humanitarian cost, will never stop unless the international community stops backing Gen. Haftar's violent acts in the country

The Libyan crisis has occupied the agenda of both regional states and global powers for the last six years. The country was about to establish a democratic structure in 2012 and 2013 until it descended into chaos after the intervention of external forces, especially in the wake of the military coup in Egypt in 2013. The regional states behind the Egyptian military coup, namely the United Arab Emirates (UAE) and Saudi Arabia, persuaded the Abdel-Fattah el-Sissi government and supported Gen. Khalifa Haftar in his military coup in Libya. Haftar attempted to seize power twice but in spite of direct Emirati and Egyptian military support, he failed to take control of the Libyan state. The same states continued to give all kinds of support to Haftar, and they succeeded in keeping him as an effective actor in the country. Haftar's supporters have been trying to legitimize his authority step by step since then. In order to take advantage of the legitimate government at the negotiation table, Haftar launched a military campaign on April 4 against the legitimate Libyan government based in Tripoli. Haftar forces killed more than 200 and wounded more than 1,000 people in two weeks.

Furthermore, the assault, which caused the displacement of over 30,000 people, was coined a military coup and another direct threat to the peace process by many international observers. However, the support from many regional and global powers such as the UAE, Saudi Arabia, Egypt, the United States and even Russia has interfered with the efforts to disable Haftar on the ground.

In spite of all this support, Haftar's military operation has failed to achieve its objective after the forces of the legitimate government in Tripoli began to undertake offensive operations against Haftar'sforces. The legal forces are no longer in a defensive position. One of the main reasons of the success of the Tripoli forces was the provision of military vehicles by Turkey to the forces of the legitimate government.

Haftar is not the commander of the Libyan army, but an illegal militia leader. Haftar suffered an embarrassing loss in the city of Gharyan. Since he could not explain this loss to his supporters, Haftar has tried to justify the loss by focusing on an external force and enemy. Therefore, he blamed Turkey and claimed that Turkey was directly involved in the crisis. However, everyone knows that Turkey is not a part of the crisis. It is only trying to contribute to the stability of the country through its support of the U.N.-backed and internationally recognized legitimate actors. In order to force Turkey to be part of the crisis, Haftar threatened Turkey and later his illegal militias abducted six Turkish citizens. After a harsh response from Turkish authorities, they had to free the Turkish citizens.

On the other hand, as in many other regional crises, such as Syria, Turkey is unfortunately alone in supporting the legitimate actors in the Libyan crisis. For instance, the weapons captured by the legitimate forces in Gharyan are American weapons given to Haftar by the UAE. Under normal conditions, the U.S. is supposed to punish the provider, i.e. the UAE, due to its misuse of its weapons. It should not be forgotten that supplying weapons to Haftar is a violation of the current U.N. prohibitions.

Many states, such as Russia and France, have blocked anti-Haftar proposals regarding the Libyan crisis in international platforms such as the U.N. and the EU. That is, all these global powers insistently continue to support the renegade general, who initiated the hostility and sabotaged the U.N. peace process.

Similarly, the Trump administration has no intention of punishing Haftar. On the contrary, Trump called him on April 15 and recognized his role in terrorism. Accordingly, Haftar, who uses the armed groups active in the country, claims that he has been fighting against "Islamist forces," "radical Islam" and "international terrorism."

This is just simple discourse used not only by Haftar but also by his regional supporters to get the support of the West, in particular the U.S. government. With the phone call, Trump indirectly endorsedHaftar's position in Libya. Regional states soon began to overtly declare their financial and military support for the renegade general.

Overall, while the legitimate government in Tripoli wants to establish a civilian government and a democratic political system in Libya, its efforts turned out to be futile due to the support of the international community for the illegitimate militia leader.

That is, the international community is also responsible for the state's failure and deadlock in Libya. The Libyan crisis, which has come with a huge humanitarian cost, a power vacuum for violence and terrorist groups, a passage way for refugees, and insecurity of the oil resources, will continue to occupy the agenda of regional and global powers in the near future.