Referendum in Colombia and lessons for Europe 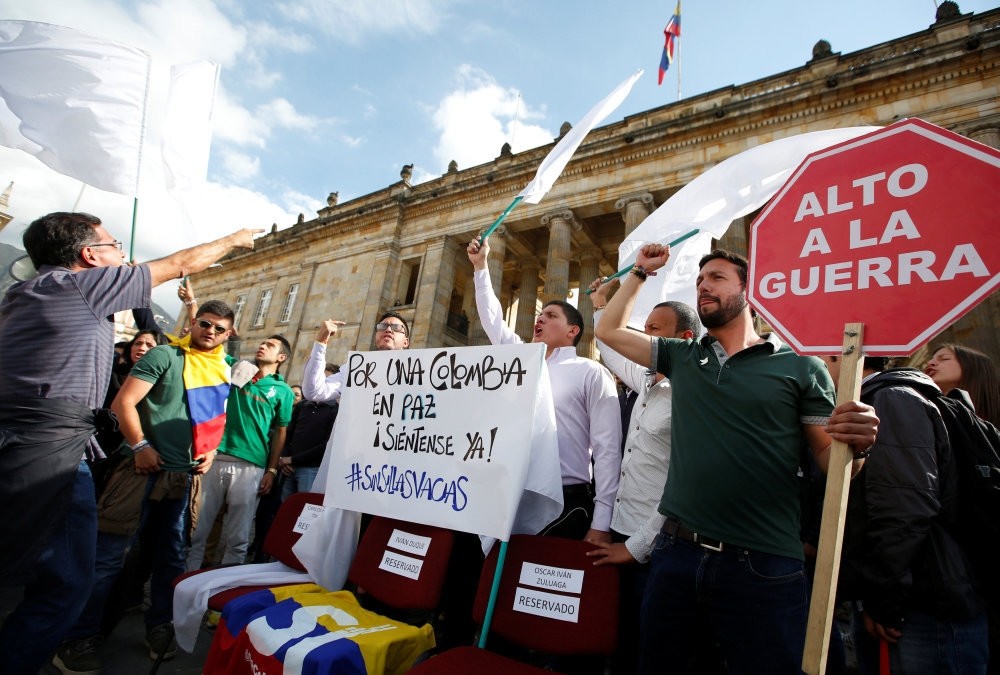 University students and supporters of the peace deal signed between the government and Revolutionary Armed Forces of Colombia (FARC) guerillas protest during a rally in front of Congress in Bogota. The sign reads: ,For Colombia Peace, sit here.,
by Beril Dedeoğlu Oct 05, 2016 12:00 am

The deal between the Colombian government and the Revolutionary Armed Forces of Colombia (FARC) was signed last week by Colombia's president and the FARC's leader. The landmark deal's aim was to put an end to the conflict that had lasted for 52 years, and closes the negotiation process of the past four years.

Through this deal, the FARC accepted laying down their weapons and joining the political process. The deal would have allowed FARC leaders to avoid prison sentences if they confessed their crimes.

Cuba had played a major role during the negotiations and most of the talks were carried out in Havana.

As the deal was about ending Latin America's longest-running armed conflict, it was applauded by world leaders. Yet Colombia's president has decided to ask the populace what they think about it. A referendum took place in the country last Sunday and the result was quite unexpected; people said no to the deal.

Figuring out why a nation rejects a peace deal is full of lessons for politicians around the world.

Firstly, those who decided to negotiate with the FARC apparently were not able to explain to the people what they were doing and why. It seems they could not address the people's real expectations. They had to pay more attention to public opinion and work on changing that. If you just put text into a referendum before being sure what people think and feel about it, that means you are taking unnecessary risks.

Secondly, it appears that half of the population accepted the deal, while the other half has rejected it. Hence the Colombian nation is now divided 50-50 and the politicians will have to rule over a polarized country.

Third, it is obvious that asking for foreign mediation on a domestic issue was not a good idea. One always imagines third parties as being impartial and in favor of peace; but this is only our imagination. They may pursue completely different agendas, and while they seem to be working for peace, they may create a ticking time bomb instead.

Fourthly, one should think thoroughly about transitional justice measures. While developing these measures in order to make sure that militants put down their weapons, ordinary people must not feel that too many concessions are being given to them.

Maybe another lesson to be drawn from the Colombian referendum is to stick with the principle of not organizing a referendum about fundamental rights, freedoms and human rights issues.

We remember that former French President Nicolas Sarkozy had pushed a law to put Turkey's eventual European Union membership to a referendum when the day comes. He wanted to exploit the French public opinion's negative stance toward Turkey. This law, however, was a violation of Turkey's rights emanating from international law and the EU's own law. Just imagine: Turkey negotiates its membership for many long years, it fulfills all its obligations, modifies its laws and rules... then it cannot join the union, because 50.1 percent of the French say no.On the same day of Colombia's referendum, Hungarians were voting as well, in a referendum about refugees. The majority of the country's people do not want to receive any refugees, and Hungary's current government agrees with them. As it is feeling the EU's pressure, the government tried to say, "We would accept the refugees, but our people do not want them."

Referendums should not turn into instruments to violate universally accepted human rights and fundamental freedoms; and definitely should not be an excuse for turning a blind eye to the unfolding human drama in Syria.

Fundamental rights are not matters for referendums, and politicians must manage political processes better while heading toward a referendum. Only those politicians unable to do politics hide behind people's fears they provoke.
Last Update: Oct 05, 2016 1:07 am
RELATED TOPICS