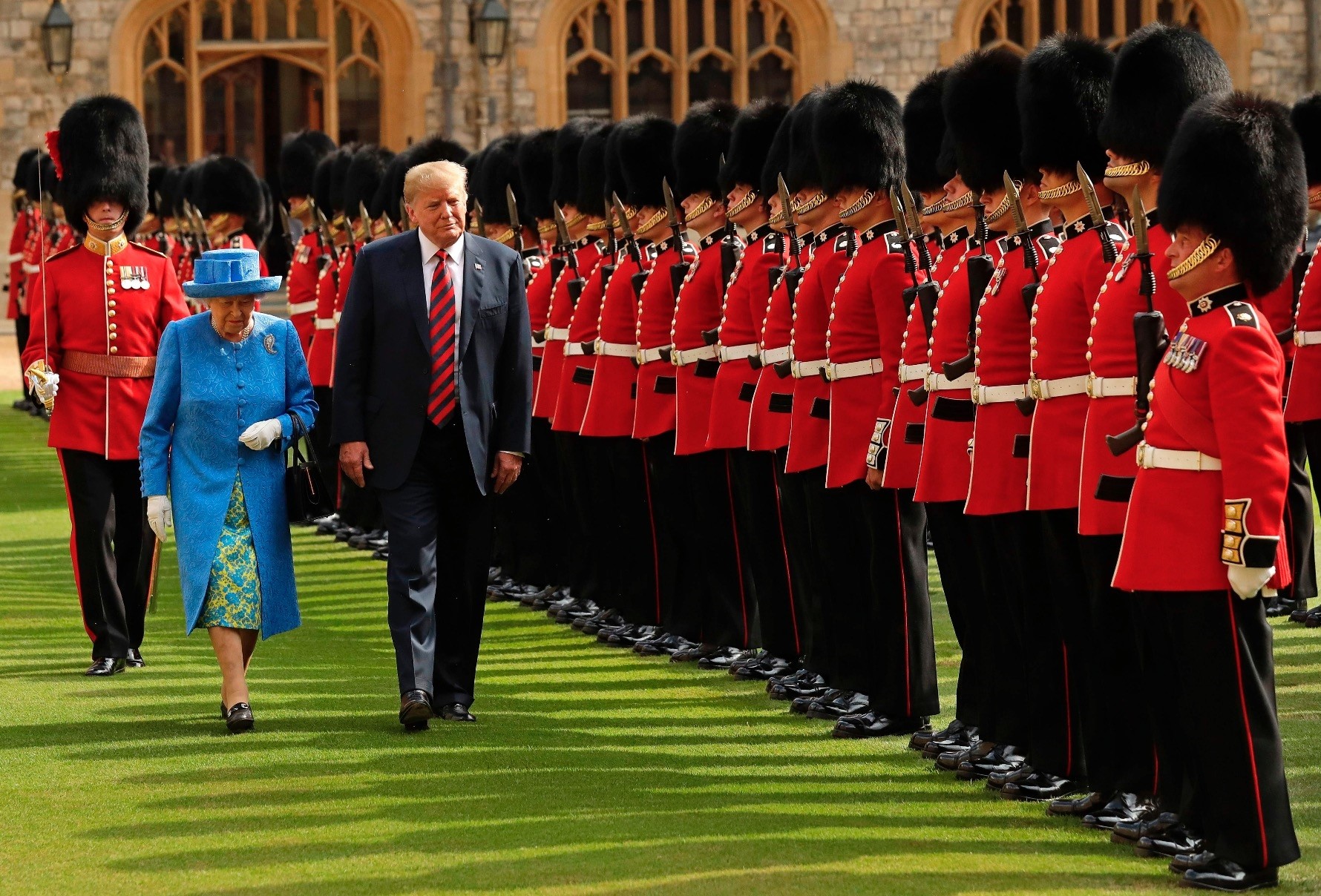 Britain's Queen Elizabeth II (L) and U.S. President Donald Trump inspect the guard of honor formed by the Coldstream Guards during a welcome ceremony at Windsor Castle, west of London, on the second day of Trump's U.K. visit, July 13.
by Beril Dedeoğlu
Jul 17, 2018 12:00 am

President Trump's controversial attitudes during his London trip will cause the U.S. to lose its traditional ally U.K.

It is obvious that U.S. President Donald Trump is not very popular in the U.K. His official visit to London last week inspired a number of protests before and during his stay. Since most U.S. presidents are usually well received in the U.K., we can easily say that Britons are very angry.

Interestingly, for Trump the feeling appears to be mutual, according to his statements and overall demeanor. His appearance with Queen Elizabeth II was particularly interesting because it is common knowledge that the sovereign holds a special place in the British political system and in the hearts of her people.

Besides, it is obvious that the royal family symbolizes tradition and continuity; so every gesture and protocol is important to them. Yet, Trump violated every rule of the protocol. Maybe he was trying to show that he does not care about the monarchy, but he also demonstrated that he knows nothing about basic courtesy. He made the queen, who – regardless of her position – happens to be an elderly woman, wait for a long time and practically forced her to run during the welcoming ceremony. One could say that Trump is always like that; meaning he was not intentionally being rude in the U.K. However, there were few indicators that point to the possibility that he had planned his behavior.

We already know that Trump has a problem with European countries, especially with Germany, and he has continuously criticized the European Union. He believes that Europeans make more money than Americans out of U.S.-EU commercial relations; that they don't invest enough in the U.S.; and they continue to do business with countries the U.S. does not like.

For all these reasons, he supported Brexit and asked for a hard Brexit, i.e. he wanted the U.K. to cut all ties with the EU. He especially does not want the U.K. to continue respecting the EU's economic and commercial regulations, knowing these rules will be considered every time the U.S. proposes a trade deal with the British. Trump does not like the idea of having to deal with European regulations while dealing with the U.K., and he manifested his frustration by treating the British, including their queen, very rudely.

The U.K. has a long tradition of statehood and diplomacy which has always been useful for improving their position in global policy. So they did not react harshly but made it clear they do not appreciate Trump's behavior.

The country's Prime Minister Theresa May, for example, gave a very responsible but efficient answer. We already knew that Trump tried to lecture the U.K. about Brexit and claims that May made big mistake by not listening to him. The British prime minister preferred to reply by disclosing what Trump told her in their private meeting about how to deal with Europeans. It appears Trump suggested May sue the EU rather than negotiate.

Trump clearly wants a brutal Brexit and is pushing for the U.K. to be on bad terms with the EU from now on. The problem is he never asked himself why the British would want that. It is obvious that Britain is opting for a soft Brexit because it better serves its interests. Trump, however, wants a lonely U.K. that would have no choice but to cooperate with the U.S. The U.S. president does not understand other countries think about their interests first and do not only serve American interests.

The U.K. has traditionally played a stabilizing role in the global economy by balancing Europe with the U.S. as they balanced Russia with Turkey, Greece, Germany and France. Trump is now asking the U.K. to abandon its centuries-old diplomacy to follow the U.S., no questions asked. It is ridiculous to think a U.K. prime minister would accept such a thing, never mind the queen. Trump's bullish approach will cost the U.S. all of its friends in the end.