What the Suruç attack means 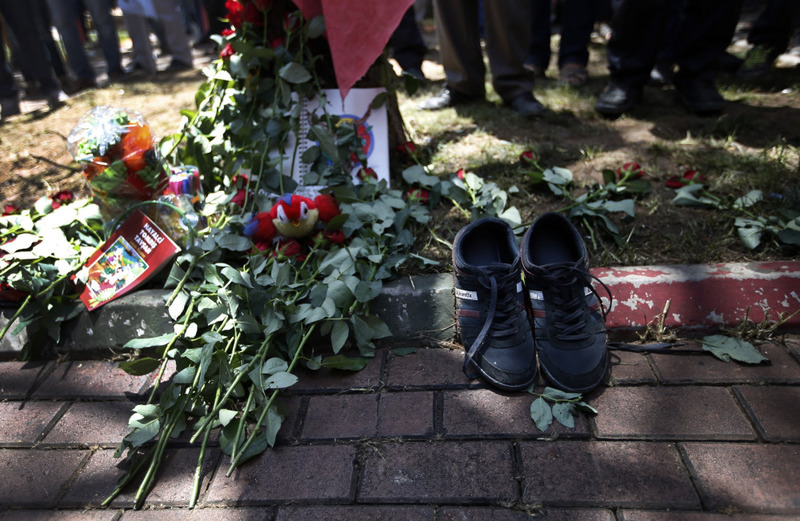 A pair of shoes belonging to a victim are seen next to flowers, laid down by mourners at the site of Monday's explosion in the Suruu00e7 district of u015eanlu0131urfa province in Turkey, near the Syrian border.
by Burhanettin Duran Jul 22, 2015 12:00 am

Quite contrary to Turkey's anti-ISIS campaign in the region, the PKK is ungratefully trying to pull the Turkish government into the chaos between ISIS and the PKK-supported PYD

I would like to take a moment to condemn the heinous massacre that a suicide bomber affiliated with the Islamic State of Iraq and al-Sham (ISIS) perpetrated earlier this week. My thoughts and prayers are with the families and loved ones of the victims.

Over the past four years, a massive influx of refugees has not been the only effect of the Syrian civil war on Turkey. The Suruç massacre indicates that various parties fighting in Syria are interested in taking the war across the border in the form of suicide bombers and foreign terrorist fighters. Keeping in mind that as the clashes between ISIS terrorists and Democratic Union Party (PYD) militants continue in Tal Abyad and Kobani, keeping Turkey's southeastern provinces safe remains a serious challenge.

In recent weeks, the Peoples' Democratic Party (HDP) leadership had highlighted Kobani's proximity to Suruç. Following yesterday's assault, they were quick to blame the government, even though the massacre attests to the costs of transforming northern Syria via the PKK and the PYD. After all, the PKK has been recruiting young people to fight in Syria among PYD ranks.

Meanwhile, thousands of volunteers and mercenaries from the U.S. and EU, among other places, have arrived in Turkey to cross the Syrian border and fight against ISIS terrorists. Ironically enough, the PYD, whose leaders frequently criticize Turkey over border security, receives more foreign fighters than any other organization in Syria. In order to disrupt the flow of Western volunteers into Syria, ISIS has moved to target the Kurdish political movement in Turkey - which is exactly why the authorities must take the threat of similar attacks in predominantly Kurdish border towns seriously.In recent years, Turkey has been combatting ISIS, whose rise hurt Turkish interests in Syria and Iraq, with extreme caution in order to avoid military engagement in Syria and discourage ISIS attacks within its borders. Kurdish nationalists, as a matter of fact, misconstrued the government's cautious stance as a sign of Turkey's support for ISIS terrorists to organize violent protests over the Kobani affair.

At this point, Turkey faces a serious dilemma. On one hand, the PYD, with support from the U.S., continues its advances in northern Syria - which translates into a fresh supply of weapons and recruits for the PKK. The risks involved with this development will become perfectly clear if and when the PKK ends the cease-fire. On the other hand, Turkey finds itself paying a steep price for clashes between the PYD and ISIS. The threat of ISIS terrorism fuels nationalist fervor among the country's Kurds, as the PKK seeks to attain legitimacy in Turkey's southeast with reference to the anti-ISIS campaign in Syria. Furthermore, it is important to note that the Suruç massacre took place at a time when the PKK celebrated the so-called Rojava revolution and called on the Kurdish people to take up arms.

Exclusive references to security breaches fail to provide a comprehensive idea about Monday's deadly assault. Similarly, nobody stands to gain from turning the situation into a battle over public opinion, as the attack on the HDP's Diyarbakır rally established. At the same time, accusing the government of supporting terrorism under the pretext of criticism will only fuel further animosity. We must, instead, acknowledge that the suicide bomber attacked not only the HDP but also the Turkish government, which recently decided to work more closely with the U.S. on ISIS.

In the wake of Monday's deadly assault, Turkey needs a comprehensive strategy to keep the southeast safe and fight ISIS terrorists.

Burhanettin Duran is General Coordinator of SETA Foundation and a professor at Social Sciences University of Ankara. He is also a member of Turkish Presidency Security and Foreign Policies Council.
Last Update: Jul 22, 2015 1:42 am
RELATED TOPICS