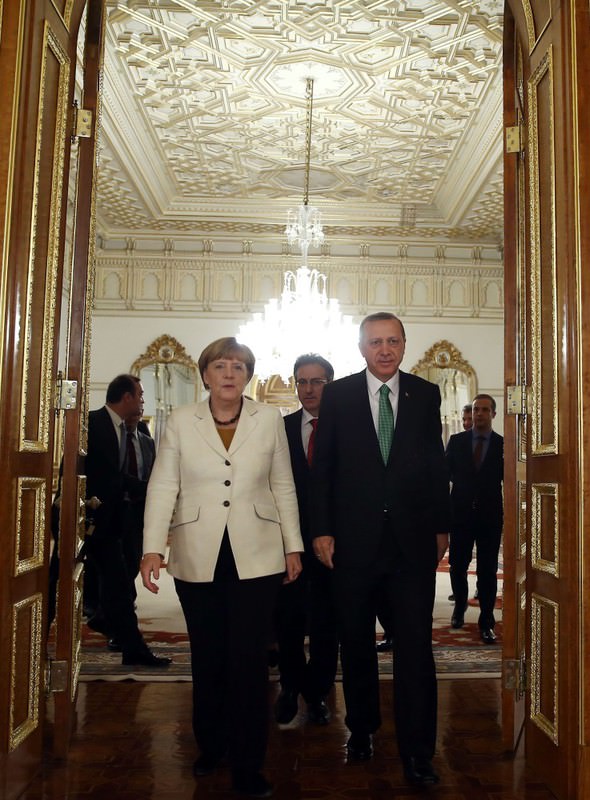 Erdou011fan and Merkel, during their meeting on how to deal with the Syrian refugee crisis
by Burhanettin Duran
Oct 19, 2015 12:00 am

The growing power of the PKK and the PYD in northern Syria will remain a source of tensions between Turkey and the U.S. until Washington starts to understand what exactly concerns Ankara

Washington's decision to provide weapons and ammunition to the Democratic Union Party (PYD), which is part of the United States-supported Syrian Democratic Forces, will put additional strain on Turkey-U.S. relations. At the heart of the disagreement between the two governments over the PYD's role lies differences of opinion about the involvement of terrorist organizations in the Syrian civil war. While Ankara views the PYD and its military wing, the People's Protection Units (YPG) as an extension of the PKK, a terrorist organization according to Turkey, the U.S. and others, Washington prefers to turn a blind eye to the links between the PKK and the PYD - at least for the time being. At this point, the U.S. is determined to use YPG militants as a ground force against the Islamic State of Iraq and al-Sham (ISIS) around Raqqa, far away from the Turkish border. In an effort to improve the YPG's chances of defeating ISIS, the White House has recently authorized the shipment of 50 tons of weapons to the YPG-dominated Syrian Democratic Forces. In response to Washington's latest move, President Recep Tayyip Erdoğan and Prime Minister Ahmet Davutoğlu have shared Ankara's frustration. Davutoğlu, as a matter of fact, warned that Turkey would not hesitate to engage YPG forces if U.S. weapons ended up in the hands of PKK militants.

In truth, Turkey's political leaders are not exactly talking about a distant possibility. The Turkish security forces have already documented that a number of weapons intended to facilitate the YPG-led offensive against ISIS are currently in PKK storage facilities. On Friday, Sabah daily published statements from an anonymous government official who claimed that Turkish airstrikes had destroyed a large number of U.S.-provided weapons, including anti-tank mines and anti-aircraft guns, stored in PKK camps in Northern Iraq. Hardly anyone would be surprised if Turkish security forces seized U.S.-made weapons in PKK safehouses in Turkey.

Regardless of Ankara's protests, however, the White House has no choice but to continue providing weapons and ammunition to the YPG. U.S. President Barack Obama, at the end of the day, has no more tricks up his sleeve and, at this time, Washington simply must wait and see how effective the YPG-led offensive will prove, which means that PKK and PYD militants will concentrate their efforts on making a difference in Raqqa. Moving forward, the movement's best shot at carving out an autonomous zone in Syria is to do a great job on the battlefield. In the proxy war over the country's future, Iranian-backed militias and Kurdish nationalists are fighting on behalf of Russia and the United States, respectively. Moreover, the White House seriously believes that there is a way to support the PYD in Syria, keep Turkey's frustration under control and prevent the Russians from running the YPG forces on the ground.

Amnesty International's most recent report, which documents the forced removal of Arabs and Turkmens from northern Syria and claims that the PYD's human rights violations amount to war crimes, represents an effort to achieve the above-mentioned goals. To elaborate, the Syrian civil war helped the PKK and PYD by boosting their international legitimacy. At this point, PKK militants believe that they can rebrand themselves as an armed movement fighting for national liberation by combatting ISIS in Syria. A key component of the Kurdish nationalist project has been the effort to create autonomous zones in southeastern Turkey. The movement intends to justify the move with reference to the Peoples' Democratic Party's (HDP) popularity in the parliamentary elections. The final piece of the puzzle would have been the removal of President Masoud Barzani from power in Northern Iraq's Kurdistan Regional Government (KRG). In the end, the PKK would secure a dominant role in predominantly Kurdish parts of Turkey, Iraq and Syria. The Kurdish reconciliation process' suspension and Turkey's successful counterterrorism campaign in recent months spoiled the PKK's party, but the organization's leadership remains committed to their original goals.

The U.S., no doubt, plays the single most important role in the PKK's bid for international legitimacy. At this time, Washington remains capable of legitimizing any movement or demonizing it as a terrorist organization in the international arena - carrot and stick, as they say. This is exactly why the White House believes that the PKK and the PYD can be kept under control and would like to convince Turkey that Washington pulls Kurdish nationalists' strings in order to address Ankara's concerns about an autonomous Kurdish entity in northern Syria. The Turkish government's decision to stop worrying about the KRG and develop excellent relations with Irbil, for instance, serves as a positive example. In all fairness, the comparison fails to highlight certain differences between the two cases, including the fact that through the PYD the PKK effectively controls northern Syria. Ankara's concerns about the situation in northern Syria relate to the PKK's separatist agenda in Turkey, not the Syrian Kurdish community's efforts to form an autonomous government.

The growing power of the PKK and the PYD in northern Syria will remain a source of tensions between Turkey and the U.S. until Washington starts to understand what exactly concerns Ankara.
Last Update: Oct 19, 2015 1:38 am