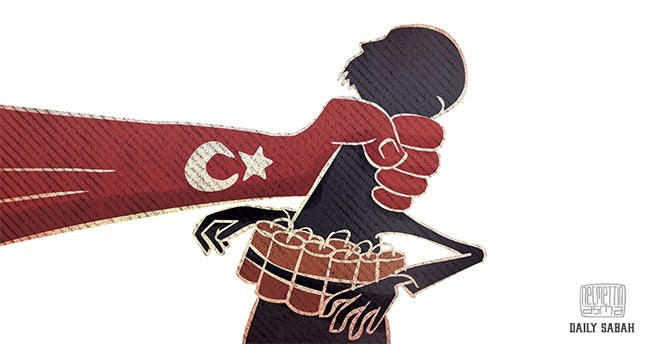 Illustration by Necmettin Asma - twitter.com/necmettinasma
by Burhanettin Duran
Aug 27, 2016 12:00 am

It seems that the issue of FETÖ leader Gülen's extradition and PYD-related developments in Syria will continue to be a matter of both tension and negotiation between Turkey and the U.S. in the upcoming months

Ankara has taken a game-changing step hitting multiple targets during Operation Euphrates Shield. It has consolidated its macro role in the Syrian equation by attempting to create a safe zone on the Azaz-Jarablus line. The concrete micro targets of this operation, which was launched after the normalization of ties with Russia, are to ensure border security, support for the Syrian opposition, to prevent a new refugee influx and prevent the Democratic Union Party (PYD) from establishing a contiguous territory.

The fact that the People's Protection Units (YPG) pointed to Jarablus as a new target after Manbij, as well as DAESH's recent Gaziantep attack, caused Ankara to make a move. The suppression of the July 15 coup attempt through public resistance, the current reconciliatory political atmosphere and the military becoming a more efficient institution after being purified of the Gülenist Terror Group (FETÖ) made it easier for Turkey to make an operation decision.

One of the reasons why Turkish tanks entered Syrian territory is Turkey's desire to end the problems created by the U.S.'s method of fighting DAESH. The efforts to eliminate DAESH by using the YPG have led to the expansion of YPG-held territory and an escalation in DAESH attacks in Turkey.

The Jarablus operation, carried out in accordance with Article 51 of the United Nations, not only protects Turkey's national security, but also means that Ankara has begun using its anti-DAESH card more actively. The Turkish Armed Forces-led (TSK) operation is progressing in a way that will fortify the Free Syrian Army (FSA) elements in and around Jarablus. There are three factors that can turn the Jarablus operation into a permanent success:

1. To provide military competency for opposition groups to seize full control of the Azaz-Jarablus line

2. To reconcile with the U.S. on the removal of the YPG from Manbij

3. To prevent DAESH's escalation of hit-and-run attacks and suicide bomb attacks in response to the Jarablus operation

As expected, U.S. Vice President Joe Biden gave "sympathetic" and "restorative" messages that highlighted the profundity of the U.S.-Turkey alliance during his visit to Ankara. While both examining the bombed out parts of the Parliament building and delivering a joint press conference with President Recep Tayyip Erdoğan, he made gestures to blandish the Turkish public. His way of sitting on the armchair, holding President Recep Tayyip Erdoğan's hand and apologizing for being late were some of these gestures. Despite being an experienced politician, Biden's visit, which predominantly focused on public diplomacy, had little concrete content. The clear and decisive discourse that Biden adopted while saying that the U.S. could never be behind the coup attempt turned into a tone that clung to the judicial process of the federal court when it came to the extradition of Fethullah Gülen.

On the one hand, he aimed to restore the Turkish public's negative perception of the U.S., saying that it would bring no benefit to hide and protect a terrorist that attacked the U.S.'s ally, and on the other, he pointed to the necessity of waiting for the judicial process and the significance of the principle of the separation of powers.

Although he used a careful discourse while saying that the U.S.'s judicial system was different not only from that of Turkey, but also France and Germany, he could not reveal the elements of cooperation on the extradition of Gülen. Erdoğan's suggestion that "Gülen must be detained to stop him from managing his group in accordance with the extradition law," underlined this weakness.

It seems that the issue of extradition and PYD-related developments in Syria will continue to be a matter of both tension and negotiation between Turkey and the U.S. in the upcoming months.