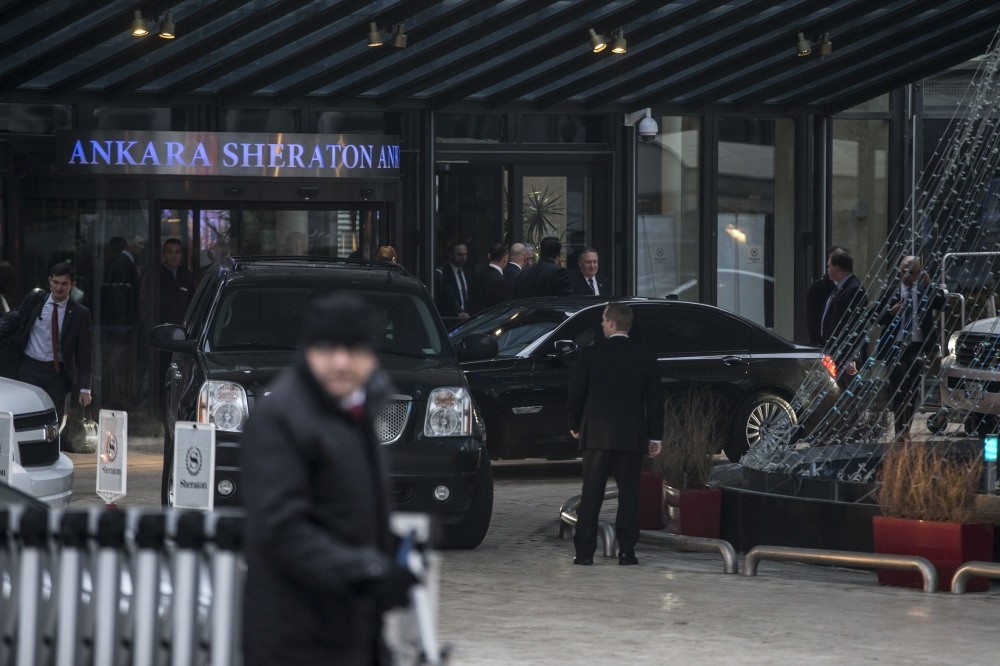 CIA Director Mike Pompeo is leaving the hotel where he stayed during his visit to Turkish capital Ankara to consult with Turkish officials about the joint cooperation between Turkey and the U.S. on the war against terror.
by Burhanettin Duran Feb 11, 2017 12:00 am

Following the warm phone call between presidents Trump and Erdoğan, the CIA head's Ankara visit was the first face-to-face start of the new negotiation era between Turkey and the U.S., which heralds the change of power balance approaching the Middle East

CIA Director Mike Pompeo on Thursday visited Ankara right after a phone call took place between President Recep Tayyip Erdoğan and U.S. President Donald Trump. Traveling to Turkey in his first foreign trip in his new role, Mr. Pompeo was tasked with negotiating the details of the issues that the two leaders had discussed: the administration's counter-Daesh strategy, joint operations in al-Bab and Raqqa, safe zones in Syria and the role of the People's Protection Units (YPG). Then again, it should be pretty clear why he came to the Turkish capital provided that President Trump expects a new counter-Daesh plan within 30 days from the Pentagon and a safe zone proposal within 90.

At this point, both Erdoğan and Trump are looking to repair the damage to Washington's strategic partnership with Ankara – damage the Obama administration created by supporting the PKK's Syrian franchise since 2013. However, it is important to remain cautiously optimistic about the prospect of turning back the clock though it will take some time and lengthy negotiations between the two countries to reconcile their interests and policies.

We must also keep in mind that it was Turkey's decision to launch Operation Euphrates Shield to remove Daesh terrorists from the 2,000 square-kilometer area between Azaz, Jarablus and al-Bab that compelled Washington to sit down with the Turks in the first place. Although the White House once urged the Turkish Armed Forces (TSK) to advance no further than 20 kilometers south of the border, the situation on the ground has forced the Americans to alter their position. Nowadays, the government is trying to sell the Trump administration on a plan involving joint operations by their special forces. As such, it would not be surprising if Turkey plays a bigger role in Washington's counter-Daesh strategy. But the critical issue is how the new plan affects the YPG.

Time and again, the Turks have called on Washington to keep the YPG out of the Raqqa operation and subsequently force them out of Manbij. If the Trump administration continues to enlist the YPG's services, it could strain Turkey-U.S. relations. Again, it is important for the Turks to work more closely with Washington without derailing the Astana process, which Ankara and Moscow made possible. Moving forward, the government's priority will be to create a balance of power between the U.S. and the Russians to maximize its interests in Syria – which is not only difficult but also closely related to the emergence of the emerging regional balance of power.

Over the next weeks and months, Mr. Pompeo will presumably visit other Middle Eastern capitals to follow up on President Trump's conversations with regional players including Jordan, Saudi Arabia and some Gulf countries.

Meanwhile, Turkish and U.S. officials will focus on one more foreign policy issue: how to limit the influence of Iran, which Mr. Trump recently called the "number one terrorist state." Needless to say, the key to containing any country is to facilitate intelligence sharing with its opponents. The fact that "there is a new sheriff in town" and "all options are on the table" could almost certainly draw the entire region into a calamity. The Trump administration's approach, a 180-degree turn from Mr. Obama's policy of rapprochement with Tehran, could not only deepen the polarization between regional powers but also trigger new rivalries and clashes.