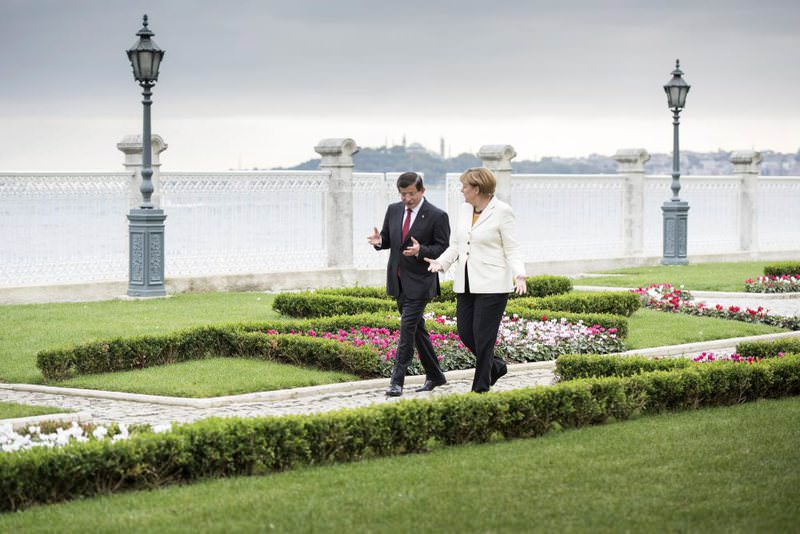 In parallel with the realization of Turkey's key role to deal with the Syrian refugee crisis on their borders, EU countries are starting to get ready to normalize relations with Turkey

German Chancellor Angela Merkel devoted her weekend to a whistle stop in Istanbul, basically to submit EU proposals to manage the refugee crisis to the Turkish government. Her very short visit of only six hours has seldom been so rich in symbols and political meaning.

Firstly, Merkel almost never acts as a go-between among a candidate country and the European Council. Such a task is usually devoted to the European Council president who acts as a mediator between non-member countries and the Council of Ministers when the need arises. France also likes to play the role of mediator through its foreign minister, or sometimes even through the French president himself. Former French President Nicolas Sarkozy loved to look like the "unofficial representative" of the EU, most of the time acting without asking his partners. This is not at all the case for Germany and Merkel. This time, the EU felt the need to ask its top brass to go and negotiate with Turkey.

Why such haste and panic? German chancellors hardly ever visit Turkey, despite the close relations between the two countries. Merkel usually shows a barely hidden displeasure to meet her Turkish counterparts and the German government is mostly displeased with President Recep Tayyip Erdoğan visiting Germany, addressing tens of thousands of supporters as if he were visiting a country of his own. Germany under Merkel's direction and her Christian Democratic Union party has an openly professed aim to never let Turkey enter the EU even in the hypothetical case Turkey fulfills all the conditions.

She still came to Istanbul and there was common satisfaction on both sides about the deal discussed between the two parties. It is noteworthy that details of the deal are still unknown. There is a mixture of ad hoc financial aid to be granted to Turkey together with the normalization of the relations with the EU. Obviously, and this is perhaps the most important dimension of the developments, Turkey and the EU feel the need to urgently mend their ailing and frozen relations.

No country in the EU's history, already rich in disagreeable behavior toward candidate countries, has been so insulted and rejected as Turkey has. The accession negotiations that began in October 2005 through incredible difficulties, were virtually suspended in eight months' time, arguing that Turkey was not abiding by the conditions of the Protocol signed previously. Greek Cyprus-flagged vessels and planes were banned in Turkish ports and airports. The EU has taken this issue to freeze eight chapters and to refrain from closing any chapter until the problem is solved. In fact, the move was an open step toward sabotaging a very promising accession negotiations process. As Nathalie Nougayrede wrote in The Guardian: "EU accession negotiations stalled years ago, mostly because European public opinion could never accept the notion of engaging with such a large Muslim country."

The EU has never kept strictly to its principles, nor has any state or institution. But relations between the EU and Turkey have become completely hypocritical. The EU has done everything to see Turkey leave the negotiating table and slam the door, the way Great Britain acted in 1967, but Turkey still remained at the table, or what was left of it. This has done incredible damage to the image and validity of the EU's principles and conditions for becoming a member. The existence of terrible corruption among member states like Bulgaria, Romania or more recently Greece has served to undermine the credibility of a European perspective for Turkey.Seen from Sarkozy's eyes, the objective to attain was always to keep Turkey at arm's length while enhancing the country's economic ties with the EU. But economic integration without proper political and institutional cooperation would go into a major political dead-end, which it did. The nonexistent external policy of the EU has also caused an immense void for the Middle East at a time when the United States is trying to pull out of the region. The void has been filled in by countries like Russia, Iran, Saudi Arabia and Qatar, leaving basically no chance for a peaceful, democratic solution. Turkey has tried in vain to use its soft power. Alone, its potential to lastingly influence the region was not enough. Its relations with the EU remaining at their lowest point, it could barely challenge the nocive effects of Russia, Iran and the myriad other armed movements in the region. So Syria was totally torn apart and masses of civilians entered Turkey to survive and escape a terrible fate.

As long as this refugee population remained in Turkey, the EU turned a blind eye to the issue. However, two important developments changed the situation of refugees. First, the resuming of the armed struggle between Turkish security forces and the PKK gave refugees the impression that Turkey was on the verge of a civil war itself and, second, the legal void the refugees fell into in Turkey, where their situation showed no signs of a lasting solution, pushed them toward a better future in the EU, but more precisely in Germany or Sweden. All of a sudden, tens of thousands of Syrian and Iraqi refugees started a massive exodus to the next EU country. This cannot be seen, as Greek Prime Minister Alexis Tsipras adamantly emphasized, as only "illegal border crossings." This is a much deeper running issue that will not be solved unless there is a semblance of normalization in Syria. Turkey's repeated calls for establishing "secure zones" with the help of allies in Syria have gone unheeded.

Merkel, together with her colleagues at the European Council, has recently discovered how hazardous it was to cut off ties with Turkey in such a dire situation. So she came to basically offer the beginning of normalization of relations with the EU. She is a good European politician and will try with the most interesting bargain price. Diverting some of the funds allocated to Turkey for managing the refugee issue, perhaps facilitating the visa deliverance for some social categories, in the best case opening a couple chapters and that will again be business as usual.

Turkey, first by the declarations of Foreign Minister Feridun Sinirlioğlu, then possibly through the stances of both Erdoğan and Davutoğlu, has asked for much more: Six chapters to be opened immediately, lifting of visa requirements by the end of 2016 and 3 billion euros a year to help refugees to integrate into Turkish society.

It is highly unlikely that the Turkish demands will be met in their entirety. This will require the assent of all member states and Germany, despite the immense domination it enjoys in the EU, will not be capable of carrying out such a task. However, even if all the demands were met, an essential dimension would be lost, as Turkish accession negotiations are not based on the requirements of realpolitik, but on principles, or at least they should be. By making a political negotiation issue out of Turkey's membership perspective, the EU is not rendering a service to Turkish society.
Last Update: Oct 20, 2015 2:07 am