The G20 summit and the refugees... 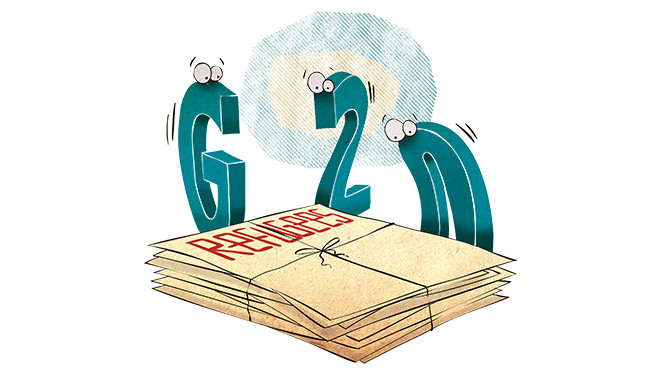 The G20 summit that will be held in Turkey this coming weekend will have to deal with, among other pressing issues, the situation of refugees fleeing the Middle East or sub-Saharan Africa. It is highly unlikely that a tangible perspective will be able to be forged at the summit because the issue is very intricate.

Firstly, migratory movements do have very different causes. Sub-Saharan African countries and regions are sparsely populated, but still there is a strong migratory wave to Europe, mainly through Spanish territories in Northern Africa and the Libyan coast, via the Italian island of Lampedusa. This movement is continuous and motivated mainly by underdevelopment. More and more, climate change is obliging a large number of people from the local populations to search for a sustainable future, and the increase in numbers is visible and steady. The remedy is basically to change the whole economic growth system, the entire energy infrastructure. Obviously, there will not be any positive development for some time to come. Perhaps by the 2030s when climate change will start to hit hard and it will most likely be too late for any profound structural changes, the fate of these migrants will require more attention. For the time being it would be presumptuous to expect any measure other than palliative attempts to control migration.

The second and more recent migratory wave started mainly after the Arab revolts. Huge turmoil and immense expectations were surfacing in the Arab world, which had remained under ossified authoritarian regimes, since perhaps the period of Egyptian President Gamal Abdel Nasser. Because of the inherent weaknesses of these nondemocratic states the social and political crises that followed had been beyond the worst fears of the early period of the revolts. Syria does not exist anymore and Iraq is divided into three regions, two of them totally ungovernable. Yemen, which already had a very weak state structure, is in a very sorry situation. It is hard to see whether Yemen will be able to remain a single polity after the end of the civil war. Egypt, which still remains the political and military center of gravity of the Arab world, is in a dire situation. A conventional coup ousted the first democratically elected president of the country, Mohammed Morsi, who has been replaced with a pure stereotype of old-time Latin American-style dictators in President Abdel-Fattah el-Sissi, who cannot govern his country for obvious reasons of absence of popular support. The Sinai Peninsula is in a constant situation of undeclared guerrilla warfare. A Russian passenger plane has just been shot down or bombed very probably by insurgent forces in the region. The situation of massacres, warfare and the absence of any visible solution has led to tens of thousands of people to flee their countries or cities to save their lives. This has resulted in an unprecedented wave of migratory movement from the Middle East to mainly Turkey. Millions of refugees and migrants presently live in Turkey and another part of this migratory movement has gone to Lebanon and Jordan, two countries already having trouble keeping domestic political stability.

For this huge migration and tragedy, the solution is more obvious and to the point: These refugees never wanted to leave their countries, their homes and their livelihood, they were forced to do so in order to escape degradation, abasement and possible death. Now for this issue, the G20 countries will remain as divided as they have been in the recent past. The U.S. and EU member states would like to have a peaceful solution in the Middle East, preferably not sending troops. Russia is fighting alongside Syrian President Bashar Assad's regime to help this obsolete dictator remain in Damascus. Now, what is interesting, is the fact that only one G20 country - Russia - wants the regime to continue to rule Syria. One other member country - China - is at best neutral, and all the remaining countries would like to see Assad departing very rapidly in order to start the normalization process of the country. Russia cannot make Assad's forces, or what is left of them, triumph in Syria, but it can effectively weaken the opposition, especially in big cities. What is more, the Islamic State of Iraq and al-Sham (ISIS), which appeared in 2013, made up mainly of the elite forces of the late Saddam Hussein, is obviously the creation of the Syrian regime. They do not really fight each other, concentrating their attacks on the civilian populations supporting any opposition. They are supported not directly, but indirectly, by Russia, Iran and Hezbollah. It is very likely Russia will declare at the summit that Syria's future should be decided by the Syrians, as they have been saying for a couple of years now, as if their intervention has left any chance to the Syrian people to express their opinion in a democratic way, and as if the Russians themselves can express their opinions freely through democratic, participatory elections.

The world, on the eve of this G20 summit, has turned not into a new bipolar system, but to a kind of modern feudalism, where just like in the Westphalia system of the 17th century, powers are left to do what they please in their backyards. The trouble is to know whose backyard Syria and the Middle East is in.

Such an international system is doomed and cannot work without producing immense crises. We will see the results of the deep conflicting, opposing views at the end of the summit, but it should also help Turkey to herald its position on the refugee issue in a better way. Turkey's foreign policy has been called all kinds of names by some of the reputable Western media outlets for a long time. It has created a deep entrenched perception that Turkey's foreign policy is one of the reasons for instability in Syria. In all my writing, I have tried to show that such is not the case. Turkey's initial aim to implement a free trade area between Syria, Jordan, Lebanon and itself was probably the only good idea for the region since World War I. Turkey is the victim, not the culprit of the situation in Syria. It does not have the ability or the capacity to change this situation because it has been totally abandoned by the EU and to some degree by the U.S. Now is the time to clean up all this mess and start collaborating seriously in order to allow Syrians to be masters of their own destiny. Keeping more than 2 million refugees within its borders is an admirable act of altruism, however it will not prevent the migratory flux to continue toward EU countries and it will not give refugees a sustainable mode of living. The summit can be a very important occasion for Turkey to show the reality of the refugee crisis to its allies and partners. It can also become a very good opportunity to devise the essential principles for a workable international relations system.
Last Update: Nov 11, 2015 1:57 am