Is France showing the way again? 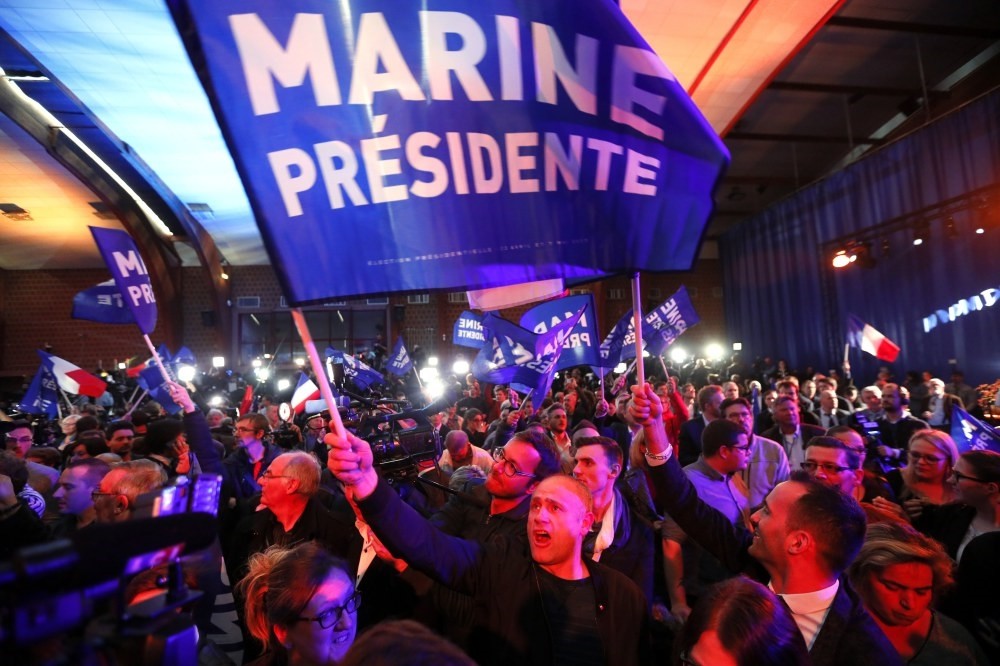 Supporters of French presidential election candidate for the far-right National Front party, Le Pen (unseen) celebrating after the results of the first round of the elections at her party's headquarters in Henin-Beaumont, Northern France, April 23.
by Emre Gönen Apr 25, 2017 12:00 am

In a nutshell, the second round of the French presidential elections will be hatred and ignorance against common sense and tolerance

The first round of the presidential elections took place in France on Sunday and the results were quite surprising. The first thing to underline is the relative poor performance of Marine Le Pen, who was poised to handsomely lead this first round with a vote approaching 25 percent of the ballots cast. She came second with a respectable 21 percent.

One of the most striking issues is the fact that, for probably the first time since the Fifth Republic was established, the immovable Gaullist conservative party was not represented in the second round.

The real and rather expected surprise came with Emmanuel Macron, who is the first candidate without any party affiliation to gain first place among the voter's choices, with almost 24 percent of the votes. He represents the center right and left, perhaps more left than right, but this is the center in French politics, a center that was occupied by the all-powerful Parti Radical throughout the Third Republic, which lasted from 1871 to 1940.

This center party has been seen as the main culprit for the incredible French defeat against Hitler's armies in 1940 and virtually disappeared after 1946, to be replaced by the Gaullist Conservative party.

Is the center reappearing in France? Surprisingly enough, the center parties did not have a candidate in the first round, even the traditionally center-representing candidate François Bayrou did not want to participate in the elections this time, endorsing Emmanuel Macron.

This latter comes from the left; he was a member of the socialist party and minister in the government under François Hollande's presidency. He left the government a year ago and decided not to participate in the Socialist Party Caucasus to become a candidate supported by his party. Instead, he established his own movement, "En Marche" (it can be translated to "here we go" or "forward"). This is not a new political party, but if Macron is elected president in the second round (as hoped by everyone) it can turn into a conventional political force.

Another surprise in these elections full of unexpected developments was the very poor performance of Benoit Hamon, the official and unfortunate candidate of the Socialist Party, who came fifth with a meager 6 percent, which is the worst result for the party during the Fifth Republic, together with Gaston Defferre's similar misfortune back in 1969.

Are French voters showing the way out from a sclerotic party-dominated politics? It is obviously too early to say, we will also have to wait and hold our breath to see if Marine Le Pen can be defeated in the second round. The poor performance on the part of François Fillon, who came third with only 20 percent of the votes, could create a deep resentment among his followers who could be tempted by a "vote/punition" and support Le Pen at the second round.

I personally believe France has enough common sense to stop Le Pen; this is not the United States where half of the voters do not go to voting stations. Still, the shadow of Brexit and Trump's election haunts every political scientist's analyses. Marine Le Pen's chances are taken very seriously.

Is Emanuel Macron a new Tony Blair? The U.K. and France remain very different countries and such a comparison can barely claim validity today. François Hollande, the outgoing president, wanted to become France's Gerhard Schröder, with some success but it did not work, despite a visible positive trend in unemployment. France needs to reform its old, ossified labor regulations; it needs to rediscover its immense capacities and earnest self-confidence. Can Macron handle such a challenge? It remains to be seen.

What is at stake is the bout between two leaders to become the president of the French Republic. One openly professes xenophobic, ultra-nationalistic, deeply anti-EU views, with a profound hatred for the "élite."

The other is a well-educated, very young French politician, the only candidate who openly defended European integration and who has very balanced views regarding external relations.

In a nutshell, the second round of the elections will be hatred and ignorance against common sense and tolerance. Descartes, once again, will win. If you think I am exaggerating in my analogies, just listen to Marine Le Pen for five minutes, then we can discuss again.

Nota Bene: Philippe Moreau Defarges, a very well-known political analyst and writer, has made a very unfortunate analysis of Turkey, basically leaving us with two options: Charybdis, civil war and Scylla, the assassination of President Recep Tayyip Erdoğan. Leave aside for one moment the orientalist and deeply patronizing, incomprehensible attitude, but the essence of the analysis looks very much like that of Marine Le Pen's: Blunt, disdainful, superficial and imbecilic.

We were used to reading sophisticated analyses on the part of IFRI collaborators (Institut Française des Relations Internationales), especially under the diligent supervision of Thierry de Montbrial, who knew and understood Turkey much better than most other researchers. Perhaps the nefarious influence of Marine Le Pen has gone deeper than we thought.
Last Update: Apr 25, 2017 1:13 am
RELATED TOPICS