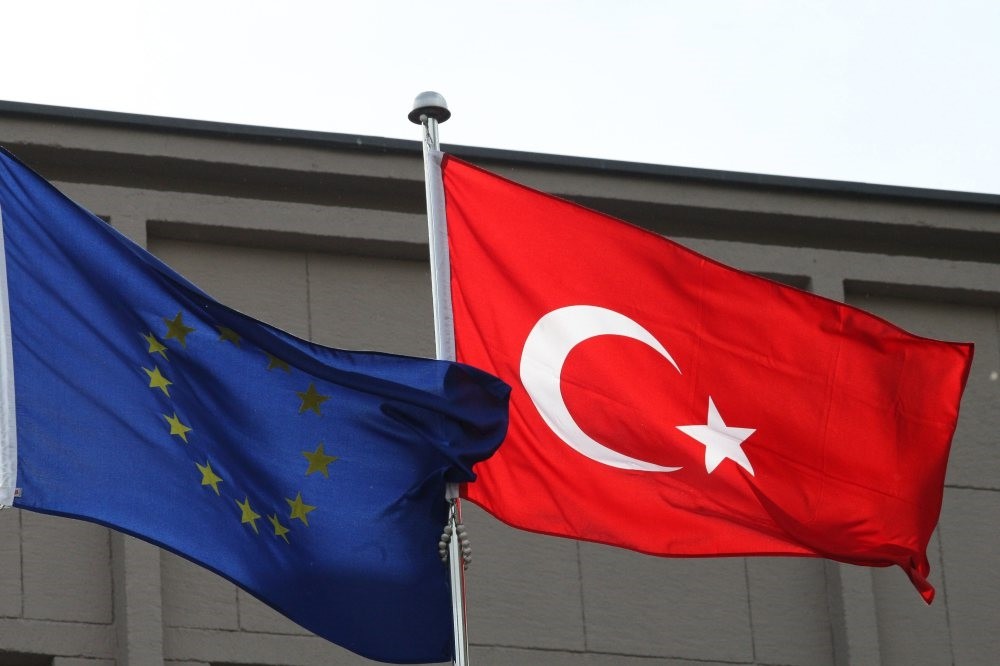 Unlike the Great Britain case, Turkey and the EU should rebalance their ties that will create a win-win relationship

When back in 1963, an ageing İsmet İnönü, who was leading a coalition government, asked his consultants in diplomacy a simple question, "Can we get out of this Common Market if we accept going in?" the answer was a lie: "Evet Paşam" ("yes General" in Turkish - İnönü was always called "general" due to his military career, much like De Gaulle).

At that time, no provision as to how to get out of this new European integration was foreseen. Still today, no real exit system can be seen in the founding treaties. The famous Article 50 does not establish any road map for a member state to get out of the EU. It only stipulates: "A Member State that decides to withdraw shall notify the European Council of its intention. In the light of the guidelines provided by the European Council, the Union shall negotiate and conclude an agreement with that State, setting out the arrangements for its withdrawal, taking account of the framework for its future relationship with the Union. That agreement shall be negotiated in accordance with Article 218(3) of the Treaty on the Functioning of the European Union. It shall be concluded on behalf of the Union by the Council, acting by a qualified majority, after obtaining the consent of the European Parliament." So an exit has to be "negotiated." This is all that Article 50 says in its second paragraph. Nothing more.

The extremely dangerous dynamic triggered by the Brexit referendum has only started showing its nefarious effects. Since David Cameron resigned, the U.K. government has been acting as though the EU were ready to facilitate optimizing the exit and the new status between the EU and the U.K. Theresa May is just seeing how very difficult the task she and her government must manage. The dinner organized in London with representatives of the UK and the EU was a total disaster. The EU is willing to make the U.K. "pay" for such an untimely and dangerous decision. The Conservative Party is living in another dimension of reality. Almost all government representatives tell the U.K. public the consequences of the Brexit that they hope and believe should happen. On the other hand, EU representatives, united for once, already white hot by the very versatile and negative attitude of Great Britain in the EU for decades, are willing to make the Brexit very "hard" for the British.

Following requests by several member states, the EU has raised its opening demand for Britain's Brexit bill to an upfront gross payment of up to 100 billion euros, according to the Financial Times. France and Poland have pushed to include post-Brexit annual farm payments in the sum. However, the calculations vary widely depending on the U.K.'s possible exit date, its share of contributions, its EU budget rebate and liabilities. In the coming weeks and months, we will see the real consequences of the disastrous and very shortsighted attitude of the Conservative Party, which thought a populist referendum could be a lesser evil.

Can Great Britain's present situation vis-à-vis the EU be an inspiration for Turkey-EU relations?

Turkey signed the Ankara Agreement with the European Economic Community under dire conditions. The association agreement should have been signed in 1961 after Greece and Turkey's bid to become members of the newly born European Economic Community (EEC). Greece signed its association agreement on July 9, 1961. It was called the "Athens Agreement" and established an association between Greece and the EEC. Turkey could not sign an agreement at the same time because it was too busy putting on trial, condemning to death and executing democratically elected Prime Minister Adnan Menderes together with two of his cabinet members, Foreign Affairs Minister Fatin Rüştü Zorlu and Finance Minister Hasan Polatkan.

Realpolitik nonetheless took over, and the Ankara Agreement was signed on Sept. 12, 1963, but could enter into force only after a year on Dec. 1, 1964, because of hesitation by the French Assembly to ratify the agreement due to the unacceptable execution of elected politicians. Starting from that date, Turkey-EU relations have always been impregnated with reciprocal defiance and double-speak. Neither party wanted to challenge, in rhetoric, the ultimate goal of the Association Agreement of 1963, which is clearly full-membership, as explained in its Article 28. In deeds, neither Turkey nor the EU thought it was feasible; they did not want it to happen. There was almost a "national union policy" in Turkey, under almost every government not to abide by the timetable for market liberalization as understood in the Additional protocol, signed in 1970.

The EU has not insisted too much upon Turkey's absence of political will to harmonize with the Single Market. The engagement of the Ankara Agreement, meaning Turkish membership, was becoming an even more distant objective with each coup d'état, with each infringement of the existing associative acquis. In 1979, Minister of Foreign Affairs Hayrettin Erkmen under Demirel's minority government tried to do what Greece did successfully in 1975: Use Article 237 of the Treaty of Rome to try to become a member immediately instead of following the road map in the association agreements. He was forced to resign due to Parliamentary outcry; even his own party did not support his move. That shows the "political will" of the Turkish political elite toward EU integration.

Even the speedy liberalization period that came under Turgut Özal, first as vice-premier under the military government then as an elected prime minister, did not take into consideration EU harmonization and was carried out in a rather untamed manner, creating important turbulence in the Turkish economy. Özal's attempt to revive Erkmen's gesture to invoke Article 237 for direct accession negotiations was met back in 1987 with enormous suspicion in the EU. The answer came two-and-a-half years later, which in itself was almost an insult in diplomatic terms. The EU advised Turkey to stick to the association agreement and complete the Customs Union, which de facto started in 1971. It is only in 1993 when the government changed that Turkey knew it was going to complete the Customs Union in a very limited lapse of time. This was the first real attempt on the part of the Turkish private sector and some political elites to try to really get close to the EU. It was successful; by 1996 Turkey was in a full-fledged customs union with the EU, excluding agricultural goods only. The Kardak/Imia crisis with Greece prevented all possible political openings with the EU; however, economic ties grew stronger, and Turkish industry showed a resilience and competitive capacity that no one was really expecting in the EU.

The real rapprochement with the EU started by the end of December 1999 when, albeit hesitantly, the EU granted Turkey "candidate country" status. The psychological distance between Turkey and the EU was so abysmal that this move was seen as "Europe losing its soul" by Alain Duhamel, a renowned political analyst in an editorial he wrote in Libération on Dec. 17, 1999.

THE AK PARTY AND THE EU TALKS

Since 2001, important legislative reforms have been implemented in Turkey, gaining incredible impetus after 2003 when the Justice and Development Party (AK Party) came to power. Prime Minister Recep Tayyip Erdoğan at that juncture was instrumental in igniting this internal dynamic, which searched for an ever-deepening integration with the Single Market, coupled with undisputable international legitimacy for Erdoğan.

The EU was caught totally unprepared for a Turkey that was abiding by the conditionality of the Copenhagen political criterion. They had to search deep in their bureaucratic paraphernalia to delay Turkey's accession negotiations. I would like to refer to an article I wrote back in 2004 in the daily Star where my analysis went as follows: "EU member states established their strategy on the presupposition that Turkey would never be able to satisfactorily fulfill the membership conditions. Now that these conditions are fulfilled, the EU does not have any alternative strategy and looks helpless. Signs of this inability to put forward a new approach abound. … Bulgarians are honored as "our European brothers" whereas Turkey is referred as 'a delicate and different question'."

Accession negotiations were delayed a good four years, but ultimately they had to be opened at the end of a memorable saga under the British presidency in October 2005. Immediately after in June 2006, eight chapters were suspended by the EU on grounds that Turkey did not allow Cypriot ships and planes in its ports and airports. This was a deal already made between the EU and Turkey: Turkish Cypriots would see the international embargo alleviated, and Turkey would make gestures towards Greek Cypriot ships (which by the way it was doing unofficially). Nothing worked for the Turkish Cypriots on the EU side, whereas the demands of Greek Cypriots were accepted as the EU position vis-à-vis Turkey.

Examples abound where Turkey has been fooled by the EU, and reciprocally also, albeit on fewer occasions. Now, having enumerated all this, should Turkey say, "enough is enough," to the EU and leave the negotiating table? Great Britain did it once in 1967. They were accepted six years later, with bitterness, and never become a real player in the EU.

Turkey will probably be offered a "qualified association" by the EU at the end of May when President Erdoğan goes to Brussels. This is the trap to avoid: In EU treaties, there is no mention of such status. One only becomes a member or a third country. If the EU wanted so much to give Turkey "special status," it should have prepared it long ago. This has not been done and is not likely to see the day because a huge number of countries will sabotage such an endeavor, fearing to be relegated to a "second division." So Turkey will be asked to exchange a tangible objective, membership, for non-existent status.

There is nothing to be gained even in the shortest run by abandoning our position of accession negotiations with the EU. An old Turkish saying goes: "He who stands up in anger sits down losing." Our relations are in a very delicate period; let the EU make the first step, make the first offer.