What will the Kurds do? 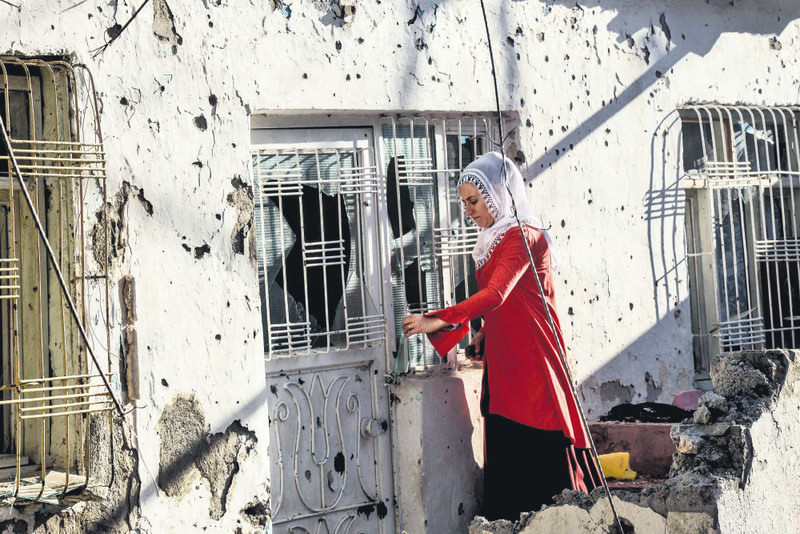 A Kurdish woman trying to open the door of her home in Silvan, a southeastern district of Turkey, after clashes between security forces and Kurdish militants
by Etyen Mahçupyan
Dec 08, 2015 12:00 am

While the PKK and PKK-affiliated PYD are co-operating with Russia, which is taking advantage of the conflict between Turkey and terrorist organizations, Kurds see the U.S. as their partner in the region

The dreams of the PKK's Syrian affiliate, the Democratic Union Party (PYD), seem to have come true. Thousands of people have had to leave their homes since the PYD cleansed Rojava of all other Kurdish and Arabic political parties. Today, some of those people are in Turkey, while the majority are in Iraqi Kurdistan. The PKK aimed to form an international network to legitimize this fait accompli. Due to the fight against DAESH, the West sympathized with the secular and "modern" PYD units. This strategy achieved its aim, since the PYD today obtains heavy weapons aid from Russia and training support from the United States at the same time.

However, this is quite a fragile situation and increases the possibility of rendering the PYD as a partner that is open to manipulation. Above all, the situation will be totally different if DAESH declines and the specific gravity of each agent is reevaluated in terms of a stable and permanent order. This is apparently a major threat to the PYD. The ideal condition for them is the persistence of DAESH, and the West's constant need for the PYD. This point reminds us of the fact that it is not very realistic to continue when you are supported by both Russia and the U.S. The U.S. wants to eradicate DAESH and the Assad regime, while Russia aims to end Syrian opposition and favors the continuation of DAESH and Assad. These two approaches do not have a scenario that can involve a long-term cohesive partnership. Consequently, a choice has to be made, and it is not difficult to predict the choice. The PYD does not want the sudden eradication of DAESH in the short term, and it also wants to cleanse the area of Syrian opposition and retain Assad, just like Russia. In other words, the permanent partnership in Syria is between the PYD and Russia, which opposes the U.S.

On the other hand, the PYD is an affiliate of the PKK. So, the choices the PYD has to make will directly influence the PKK's position and strategy. When the acquired cantons in Syria and the ambiguous self-governance initiative in Turkey are compared, it is evident that the former will predominate. The PKK might adopt a line that can seem irrational in Turkey in order to guarantee Syria. The tension between Russia and the West might lead Russia to encourage the PKK to harm Turkey. For the PKK, being a part of Turkey and being content with the EU's conditions and complying with democracy are not favorable options. The cooperation with Russia will keep their dreams of seizing power and obtaining cantons alive, which would enable them to seize a part of Turkish territory.

On the other side of the coin, the Turkey-U.S. partnership is growing increasingly stronger, and the revival of Turkey-EU relations also contributes to this partnership. The transparency of the interest difference between Russia and the U.S. might lead the U.S. to make a choice. The U.S. wants to benefit from the PYD but it also has to please Turkey as a result of this cooperation. However, the PYD's relationship with Russia erases the possibility of a result that will be approved by Turkey. While the anti-DAESH fight has gained direction in accordance with Turkey's wishes with the inclusion of Great Britain in the process, it would not be a surprise if the U.S. keeps the PYD at bay in time.

All these factors directly interest the Kurds in Turkey, as well. Kurdish people generally feel inclined towards the U.S. It is natural for them to side with the U.S. should they have to make the choice. What kind of prediction can we make with regards to the relationship with the PKK that is in cooperation with Russia and the Kurdish people that are inclined towards the U.S.? This will be the main question for Kurds in the upcoming period. Resuming the reconciliation process will also depend on the answer of this question.
Last Update: Dec 08, 2015 2:09 am