Simple facts about the Kurdish question 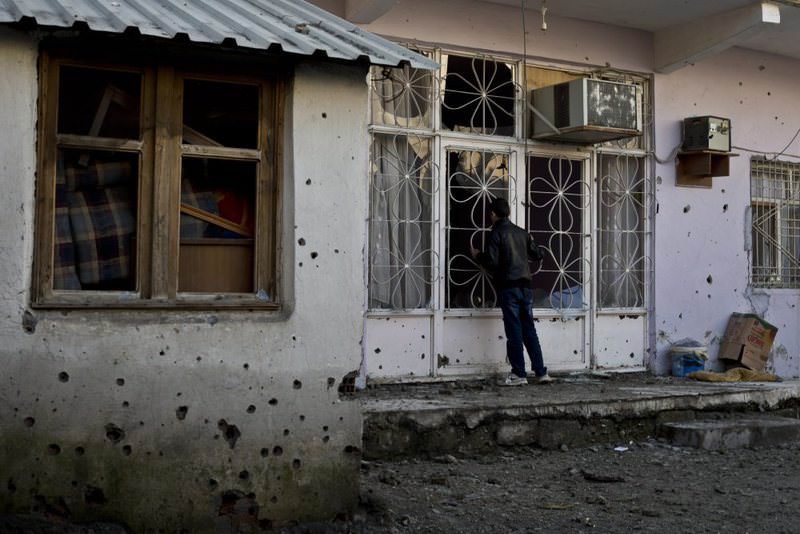 A Kurdish boy waiting outside a house riddled with bullet holes after clashes between security forces and the PKK in the Cizre district of southeastern u015eu0131rnak province.
by Etyen Mahçupyan Jan 20, 2016 12:00 am

For permanent peace in the southeast, the PKK first must give up fighting and the HDP must stop supporting it and, second, the AK Party should take the essential legal and social steps for reconciliation

It is easy to create perceptions that do not reflect reality through propaganda. It is even easier especially if you are addressing a group of people that does not have any idea about the subject but is still psychologically ready to accept what is said as is, and if you are inclined to distort reality due to personal ideology. Such activity, which seems to entail conveying information and taking a position, has arisen lately regarding the Kurdish question. Many journalists and academics that are allergic to the Justice and Development Party (AK Party) can digest defending arguments basing on lies under the pretext of activism by disregarding reality.

On the other hand, as many rational people emphasize, the AK Party government of course has many faults and defects. But we are in the face of a simple fact. First of all, in the context of the Kurdish question, the rightful deeds of the AK Party outnumber its mistakes. Secondly, the AK Party's realized rightful deeds and its potential to realize more are much higher than the deeds and potentials of other political parties. Thirdly, the AK Party has less of a less role in ending the reconciliation process than the influence of the outlawed PKK and its parliamentary wing, the Peoples' Democratic Party (HDP). And lastly, the PKK's will, not siding with peace, is even higher than the maximum level the AK Party could possibly have in this respect.

To put it differently, this simple fact indicates that the Kurdish question cannot be resolved since the PKK and HDP do not want a solution. And if it is to be resolved one day, it will be achieved thanks to the AK Party, because there are two prerequisites for peace and resolution. First, Kurdish politics must give up fighting and, second, the AK Party government should take the required legal and social steps that will legitimize peace.

It is useful to note how far the existential characteristics of the two agents act as determinants at this point. The semantic world of the PKK and HDP is based on obtaining rights through conflict and war. They see every possible acquisition that could be obtained in a peaceful atmosphere as weak under their expectations since peaceful acquisition signifies the other party's consent. So through this lens they would have acquired more had the war been sustained. This perspective, which is an integral part of a maximalist strategy, paralyzes the PKK and HDP. The main goal diverts from improving Kurds' living conditions and liberties and instead, motivations to increase the organization's capacity to gain power to the maximum level stand out. And the targeted maximum level does not have an upper limit. However, the increasing level of organizational acquisition can work against Kurds. The balances were different in the Kemalist state. The organization's acquisition equaled the people's acquisition in that context. But this is no longer the case under AK Party rule.

The reason for this is inherent in the AK Party's existential characteristics. Above all, it is a party that came from a peripheral position and ontologically stands against the center. It had to embrace democratization and normalization to open a space for itself in the center and has been obliged to make reforms. Secondly, it is a party that represents a social segment that could get ahead with Kemalist Turkish identity to the extent of its Islamic sensitivities and that is barely in need of this identity for self-confidence. And thirdly, it is a party that has achieved staying away from the center's authoritarian mindset due to the patriarchal mindset lying behind religious and Anatolian culture. It has also internalized a heterogeneous society by transcending the ideal of a homogenous society. These three factors could enable the development of a new political perspective that is open to embrace Kurds. Complete egalitarianism might not have been achieved yet, but it is certain that things are progressing in that direction in our inner worlds.

For those who want to defend Kurdish rights, the PKK and HDP constitute a burden that only acts as an obstructer. In the current context of the country, the AK Party is the only meaningful leverage at hand even though it has not grown fully mature yet. The resolution will be easier as long as we could look at both parties objectively.
RELATED TOPICS