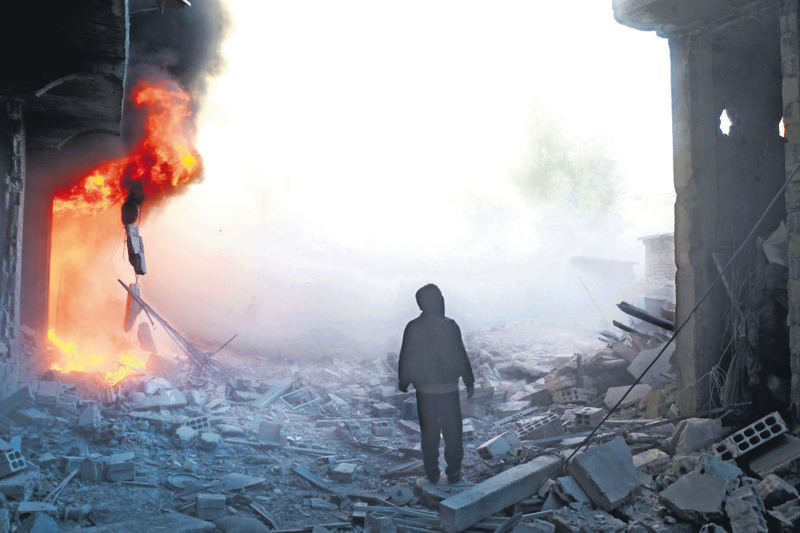 To cover his relation with DAESH, which came to light when Turkey downed the Russian jet for violating its airspace, Putin, with false evidence, accused Turkey of supporting the terror organization

The tension between Turkey and Russia is getting increasingly worse. Neither country has experienced this level of tension in relations with each other since 1945. After downing the Russian plane that violated its border, Turkey was very careful to maintain an attitude that would not escalate the tensions further. Be it President Recep Tayyip Erdoğan or Prime Minister Ahmet Davutoğlu, both have indicated that the Russian warplane was shot down due to the violation of the rules of engagement, that this should not be regarded as a move against Russia and that they were for the continuation of the present economic, political, social, and cultural relations.

There were two options for Russia with regard to its downed warplane: First, to seek its rights in a diplomatic manner without transforming the situation into a crisis; the second was to push Turkey into a corner and escalate tensions. Russia preferred the second path, and Putin stated that it would take Turkey to task on its fallen plane. Russian leaders, with President Vladimir Putin at the head, gave speeches clearly targeting Turkish leaders, Erdoğan, foremost among them. Alongside these harsh addresses, Russia began to apply various economic sanctions on Turkey. In addition to all this, Russia announced that it would suspend its visa-free travel regime with Turkey at the beginning of the new year.

With these harsh polemics and economic sanction packages, Russian leaders are attempting to follow through with two strategies at the same time. We can name these "theater politics" and "camouflage politics."

The photo of a soldier with a rocket launcher on his shoulder on the Russian warship passing through the Istanbul Bosporus two days ago as well as Putin's "We'll cut Turkey down to size" type threats are part of this theater politics. At the bottom of Putin's theater politics lies the attempt to restore the reputation that is believed to have been damaged by the downing of the warplane.

For a time, Putin's Russia regarded itself as the undisputed winner of the ongoing Cold War over Syria in the Middle East. After its direct intervention in the Syrian civil war on Sept. 30, it assumed that no actor would protest its presence in the region. Turkey's downing of the Russian plane was thus regarded as a symbolic attack. And to surpass the damage caused by this, extremely hyperbolic displays began to be staged against Turkey. Russian leaders, Putin foremost among them, attempted to once again revamp the anti-Justice and Development Party (AK Party) and anti-Erdoğan discourses that had abounded during the Gezi Park protests and their aftermath. Words such as "Erdoğan is authoritarian," "the support provided by Erdoğan and his family to DAESH," "oppression of Kurds," "limited free press" and various others were spread by Russian leaders.

Of course, Russian elites preferred to take up the absurd accusation that "Turkey supports DAESH." The main actors who have provided Putin with these anti-Erdoğan and AK Party theses and discourses are the same actors who organized the Gezi Park upheaval, namely, the Gülen movement and the terror organization, the PKK.

In this period, many allegations that were previously disproved by Turkey and became untenable except as manipulative short-term attacks are now once again being put into circulation. For example, to prove Erdoğan's supposed relations with DAESH, a photo that R. Tayyip Erdoğan's son Bilal Erdoğan took with kabab stand owner Ismail, whom I also know very well and am a good customer of, is being shown as "evidence" of DAESH-Turkey relations. The only evidence here is that Ismail looks like a religious person with his long beard. This photo was first distorted in this way during the Gezi Park protests. That it was an out-and-out lie has been proven long ago. Apparently, Russian leaders thought that with this photo they could get the United Nations Security Council to act. What would Jean Baudrillard say if saw all this?

The second strategy being performed by Russia in the aftermath of the plane crisis is that of "camouflage politics." At the core of the camouflage politics is the effort to hide Russia's demonic actions in Syria. Russia entered Syria under the flag of fighting against DAESH. The military intervention it has led has had the purpose of keeping the Assad regime in power. To this end, it has rained bombs down on the entirety of the moderate opposition. It has caused the deaths of hundreds of civilians. It has shot aid convoys. And while all of this was going on, it made no strategic moves against DAESH. DAESH transformed into the legitimizing tool of Russia's irredentist politics in Syria.

All of this is about Russia's increasingly narrowing economic and tightening political arenas. Russia's problems grow the more it follows irredentist politics. And to take care of growing problems, it opens up even more. I wonder, if we were to liken this situation to that of an indebted person who borrows even more to pay off their debt, would we be wrong?
Last Update: Dec 11, 2015 2:15 am
RELATED TOPICS