Is the goal to isolate Trump? 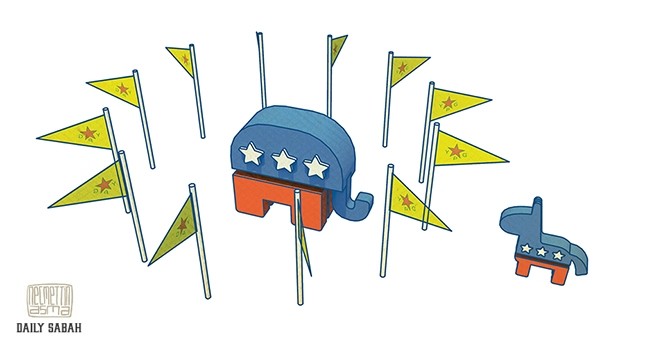 The YPG decision, which was an irrational move even for the U.S. itself, was an attempt by Obama's men to sabotage the upcoming Erdoğan-Trump meeting

Although Barack Obama left his seat, the effects of his policies still continue, while his mindset and proponents maintain their influence in U.S. politics.

During his second term in office in particular, Obama waged a war of attrition against Turkey. He exerted efforts to change the government in Turkey and for this purpose he even allocated space to several terrorist groups.

Obama also changed his Syrian policy only to "prevent President Recep Tayyip Erdoğan's consolidation" and provided indirect support to the Assad regime. In a nutshell, Turkey-U.S. relations went off the rails during Obama's reign.

Currently, Turkey wishes to recover relations by taking advantage of the changed U.S. cabinet. President Erdoğan and his delegation is traveling to Washington to this end, and I am one of the delegation members accompanying Erdoğan during his visit. The delegation will head to Washington after paying a visit to China.

Ever since Donald Trump was inaugurated, there has been considerable efforts to make him a lame duck. The goal is to discredit his unorthodox ideas regarding the establishment and pull him towards the limits of the deep America. In this regard, the media outlets favoring the status-quo waged war on Trump starting from the campaign period and have continued to target him this way since his election with great efforts to represent him as illegitimate.

Within this period, they pressed on Trump particularly with regard to Russia and Turkey. They started claiming that Russia backs Trump and that he will cooperate with so-called "authoritarian" leaders, such as Vladimir Putin and Recep Tayyip Erdoğan. Those running the anti-Trump campaign in the U.S. media are also well-known for their anti-Turkey and anti-Erdoğan stances, as well. These agencies are exerting vigorous efforts to isolate Trump in office with their political and bureaucratic offshoots.

The Pentagon made Trump authorize the provision of heavy weapons to the PKK terrorist organization's Syrian affiliate, the People's Protection Units (YPG), right before Erdoğan's U.S. visit, which is closely related to the concerns above. With this step, Obama's men attempted to sabotage Erdoğan's Washington visit and limit the maneuvering and collaboration possibilities of the two leaders.

The ones in favor of arming the YPG today are the very agents that formerly created Obama's Syria policy. And unfortunately, they made Trump take a step in the wrong direction.

There is a serious strategic mistake here. We are confronted with an approach which equates the whole Syria crisis to the Daesh problem, reduces the anti-Daesh fight to the Raqqa operation, and suggests that the Raqqa operation should be launched with the involvement of the YPG.

Let us look at the arguments of those defending the arming of the YPG. Their first argument is that the YPG can easily be led and is eager to fight against Daesh. Secondly, they say that if they do not cooperate with the YPG, the group may shift direction to become a Russian ally. And thirdly, they contend that they must take immediate action, so conducting the Raqqa operation with Turkey would cause them to lose time.

First of all, the YPG draws its strength from U.S. support. Therefore, it can neither be effective in the field nor be taken into consideration in the absence of the U.S. support it receives. Secondly, the U.S. brought the Raqqa operation to the agenda eight months ago, and they were arguing that joint action with Turkey would cause them to lose time even back then.

In the light of the new developments, Turkey regards the YPG as an immediate threat and will be present on the ground with hard power as a result. The U.S. will have to develop a new strategy when it understands that this stance of Turkey is inevitable. However, the mistakes made within this period are likely to exacerbate the problems and serve the globalization of terrorism.
RELATED TOPICS