Fatma not first, not last victim of YPG terrorism 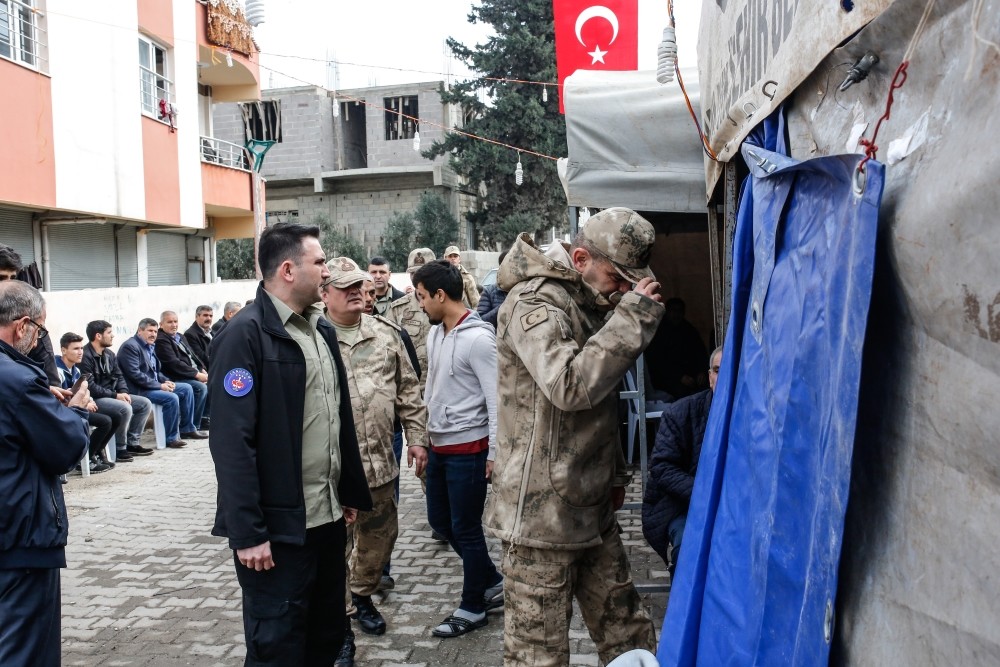 Commanders attend the funeral of 17-year-old Fatma Avlar, killed by YPG terrorists at her home Wednesday, Reyhanlu0131, Hatay.
by Fahrettin Altun Feb 02, 2018 12:00 am

Fatma was a 17-year-old high school student who used to live in a three-story house in the Gültepe neighborhood of the Reyhanlı district of Hatay. A rocket fired by the People's Protection Units (YPG) on Wednesday night from Afrin struck Fatma's home. Unfortunately, she died in her sleep. A young woman, full of dreams, hopes and excitement was murdered by the YPG.

Fatma is the fifth civilian to lose her life by YPG rockets over the past two weeks. On Wednesday, the YPG fired five rockets at Reyhanlı, aimed at civilian areas. Without distinguishing between houses of prayer, homes or workplaces, the YPG fired 48 rockets into Turkey over two weeks.

These experiences clearly put forward Turkey's justification in leading the ongoing operation in Afrin. The presence of a terrorist organization on the border that regards Turkey as its enemy is a big national threat. We can see that this organization, with the rockets it has, can threaten Turkey and kill civilians. Not intervening against this organization and simply sitting back and looking on as it gets even bigger guns will only serve to increase the dimensions of the threat facing Turkey.

The Afrin operation has once again shown the YPG's true colors. Above all else, it showed that the YPG is a PKK affiliate organization that regards Abdullah Öcalan as its leader and that it regards itself as tethered to the upper management of the Kurdish Communities Union (KCK). We have seen PKK-affiliated elements in Turkey, Iraq, Syria, Iran and Europe protest against Turkey's Afrin operation with posters of Öcalan and using YPG, PKK and Kurdistan Free Life Party (PJAK) flags.

The second truth that has appeared following the launch of the Afrin operation is that the YPG is a terrorist organization that targets civilians and is easily able to act against codes of human rights. The YPG indiscriminately targeting homes, workplaces and houses of prayer with rockets and causing civilian deaths in Turkey are proof enough of this. The situation is not limited to just this. The YPG and its political arm, the Democratic Union Party (PYD), are organizations that have carried out violations of human rights and caused civilian deaths since the day they were formed.

When in May 2015, 115 Kurdish intellectuals from Europe, Iraq and Turkey met and said that the "PYD established an authoritarian structure using violence in northern Syria, is trying to oppress the parties within the Kurdish National Council and is trying to subdue the Kurdish journalists and writers opposed to it," no one in the West paid any attention. After all, the YPG was fighting against Daesh. From the moment it began to establish its strength in Syria, the PYD began to oppress all other Kurdish groups and tried to eliminate the opposition using violence when necessary. Unfortunately, it was successful.

The 12 Kurdish groups that existed when the Syrian civil war began have decreased to just one in the country's north. What happened to those left behind? Leaders of opposition groups were killed by the PYD. For example, Mashal Tammo, Abdullah Badro, Sharzad Haj Rashid – each of them representatives of a different Kurdish group – were victims of PYD assassinations. Salah Badraddin, the leader of the Syrian Kurdistan Democratic Party, escaped to Irbil.

The PYD did not just eliminate other Kurdish groups in the areas it took over, but also engaged in strict demographic engineering. It forcefully displaced Arabs, Turkmens, Assyrians, Armenians and others of various ethnic groups that did not support it. A Syrian Network for Human Rights report about forced displacement is littered with examples. Here I will simply say that the number of Kurds who escaped PYD oppression and sought asylum in Turkey is 350,000.

Alongside this, the PYD also repressed journalists in the region, arresting many and intimidating others with threats.

However, the PYD's human rights violations and crimes are not limited to these. Child soldiers in the YPG due to PYD enforced conscription deserve a lengthy analysis by itself. The fact that the PYD has forced 12 year olds to fight has been recorded in many international reports, foremost among them a report from the Independent International Commission of Inquiry on Syria. There is also PYD violence toward women and children. From 2011 to 2016, the PYD killed 42 Kurdish women.

It is necessary to specify the U.S.'s immoderate support to the PYD and YPG in their capacity to find such a wide swathe of actionable territory. The U.S. did not just supply this organization with weapons; it also presented the YPG as a legitimate organization of resistance by separating it from the PKK. Western media mythologized this organization and unfortunately ignored the crimes it committed. Unfortunately, this is what happened.