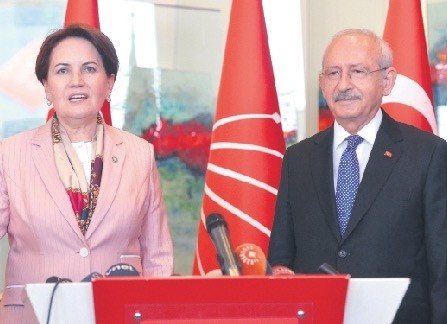 With the oppositional bloc relying mostly on emotions and ideology rather than politics and visionary alliances, they have now found themselves leading toward the elections without a strategy

The anti-People's Alliance finally landed on a strategy for the June 24 elections. Unable to agree on a joint presidential candidate, the various opposition parties decided to field their own contenders. Having made their peace with the fact that President Recep Tayyip Erdoğan will win the race, opposition leaders desperately want Meral Akşener to be the runner-up. But they won't stop there.

The opposition bloc will pursue two goals. First, they will try to win the parliamentary majority. The alliance, which formally features the Republican People's Party (CHP), the Good Party (İP), the Felicity Party (SP) and the Democratic Party (DP), is backed by the Peoples' Democratic Party (HDP). There is no need to discuss the contradicting views of the bloc's individual components, since their take on the country's history and future, religion, state and society are completely different. The only thing that unites them is the prospect of removing President Erdoğan from power. At the very least, they would like to inflict some damage on Turkey's most popular politician.

One could argue that the executive and legislative branches are supposed to balance each other out under the presidential system. Some of our readers might wonder whether the executive branch would be more democratic if the opposition bloc controlled Parliament. I wish it were that simple. The first problem with that view is that the anti-People's Alliance subscribes to an emotional and ideologically charged (rather than policy-oriented and visionary) kind of opposition. In other words, they are not opposed to the ideas and policies of Mr. Erdoğan's administration but the man himself and his very existence in the political arena.

As such, opposition leaders hope to create gridlock by winning the parliamentary majority on June 24.As for the opposition bloc's second goal: All members of the anti-People's Alliance desperately want to cast doubt on the legitimacy of the upcoming election. Their audience is limited to decision makers in Western capitals and opposition groups at home. Hence their efforts to portray the June 24 election as part of a shock and awe strategy. In truth, the CHP leadership had been falling for early elections for some time and therefore could not object when the issue came up. Still, they have been talking about election safety and shock and awe.

The opposition bloc will compete in the presidential race with relatively weak candidates. Their main goal will be to portray Erdoğan as a strongman whom Parliament must keep under control. To be clear, Turkey's opposition leaders have no interest in actually running the country. Instead, they want to create gridlock and make Turkey more susceptible to outside interferences.

To deny the opposition an opportunity to accomplish their goals, the Turkish people must not only support Erdoğan's presidential bid but also ensure that the Popular Alliance maintains its majority in the Parliament.