From the human zoo to diversity initiatives 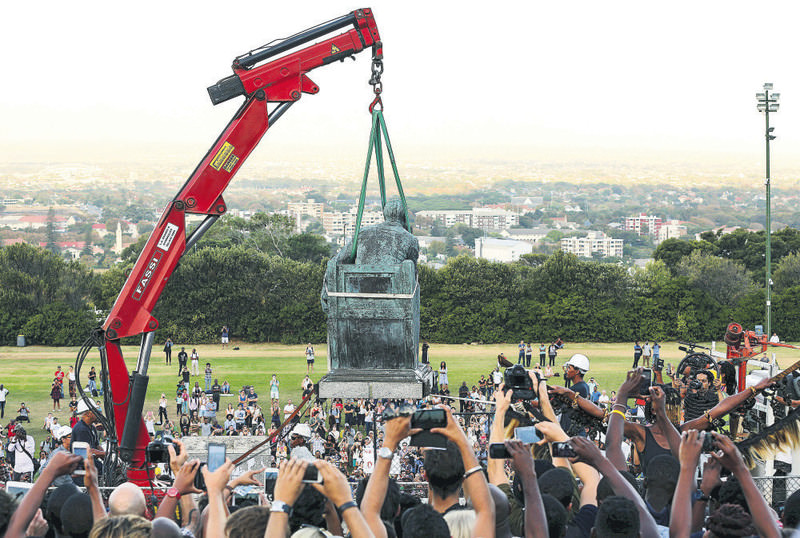 South African students cheer as the statue of Cecil John Rhodes is removed from the University of Cape Town on April 9. Rhodes in seen as the symbol of oppression meted out by Whites, who believed they were separate, superior and fully evolved.
by Hatem Bazian Apr 13, 2015 12:00 am

The mind is a mirror and microcosm depository of the larger society, thus institutional efforts directed at addressing racial problems by means of diversity initiatives rooted in the human zoo concept will not solve or remedy the race problem

In the 18th, 19th and early parts of the 20th century, the idea of a human zoo was an established normative way to come into direct contact and examine closely the "lower breeds" of the human evolutionary scale. Human zoos of this type were present in major European cities and frequented by everyone in society since it provided a window into the past, the uncivilized and distant animal-like human types who are still present in distant places and are yet to emerge into full humanness. From a perspective of periodization, human zoos corresponded to Europe's colonial efforts and the need to situate a realm of the subhuman and uncivilized that necessitates intervention, conquest, development and civilizational trajectory management. European societies were mobilized to imagine, theorize and internalize a civilizing and Christianizing role for themselves around the world. Consequently, the human zoo, as an ideological construct, made it possible for Europeans to witness the inferiority of others firsthand and then be inspired into civilizational missions and action.

Importantly, racial superiority exists if an inferior is present or imagined to measure the constructed qualitative difference through and by it. A superior has meaning only with the presence of an inferior and, if it does not exist, then it has to be produced, otherwise superiority has no meaning. The zoo and the "inferior" humans brought to populate the exhibits were part and parcel of Europe's crafting of a superior self in relation to the exhibited other, identity formation and affirming a global white supremacy. Certainly, the exhibits had nothing to do with attempts at understanding the reality, background and history of the "inferior" people for they were the extras in a global racial theater where the main and only actor is whiteness. Being subhuman was ascribed to non-European populations before Europe came into contact with them and theories of inferiority were well developed and expounded upon before sailing out to discover, pillage and conquer.

Certainly, race is a socially constructed phenomenon, but this does not mean that it has no vested meaning, power or impact on the racialized subjects themselves and those who undertake the classification process. The human zoo made it possible to establish an initial location for the inferior races within the European mental landscape, which was always the other, the subhuman and the constantly in need of civilizational and interventionist projects.

Thus, the human zoo established a demarcation between animal-like people who had not evolved into higher being and the fully developed and conscious European human - a separate, superior and fully evolved person. The zoos existed for the purpose of gazing at the subhuman subjects in order to legitimize the assigned inferior position within the existing European political, social, economic, religious and racial epistemic structures. Just like an infant that is incapable to fend for itself at a young age, the subjects exhibited at the zoo were instruments to create the lesser human breed that then could be mobilized for their collective dispossession and a tool to provide the needed rationalization for the existing global and material highly racial power structure. The more exotic, strange and abnormal the more useful for this ideologically crafted strategy.

Current diversity programs attempt to cosmetically address an ontologically, ideologically and epistemologically constructed "otherization" structure. Recent racist events in the U.S. and Europe should be understood within the broader otherization process, including deconstructing diversity initiatives that merely window dress the racial problem but never undo the deeper structure that continues to give it meaning. Diversity in this context works to bring the human zoo concept into closer proximity to enrich, celebrate and expand the horizons of the dominant and superior race, but never challenging the embedded ideological subhumanness and racial othering.

Is it possible for the current societal structures in the U.S. and Europe to address violence directed at communities of color, black people in particular, without a deeper examination of racial epistemologies and demolishing the human zoo living inside the mind. The mind is a mirror and microcosm depository of the larger society, thus institutional efforts directed at addressing racial problems by means of diversity initiatives rooted in the human zoo concept will not solve or remedy the race problem.
RELATED TOPICS