Palestine: An exception to free speech 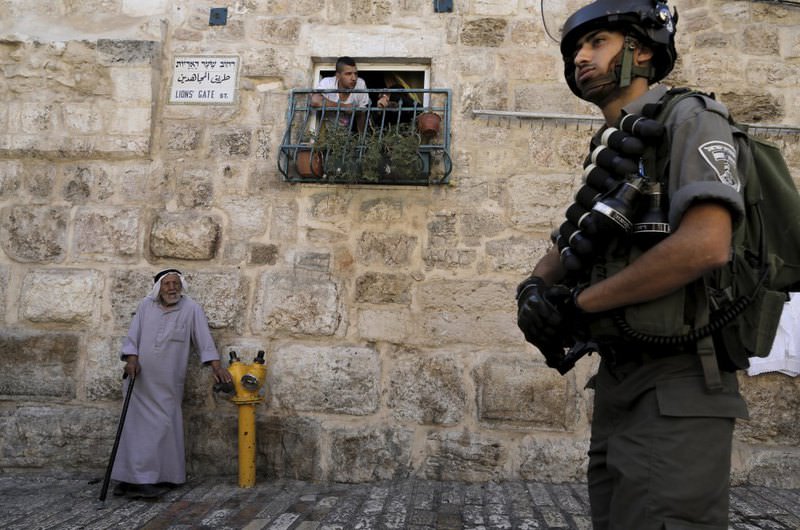 The signs of Israel's pressure on Palestinians is evident by the actions of the Israeli police in the region.
by Hatem Bazian Oct 01, 2015 12:00 am

The religious discrimination shown by Israel has once again appeared in the Rabab Abdulhadi case. The extremist pro-Israeli group AMCHA, which operates at many U.S. universities in order to research Palestinian academics and students, accuses Abdulhadi of misusing university funds and meeting with terrorist groups

The case of Rabab Abdulhadi, a professor of race and resistance at San Francisco State University, is paradigmatic of the experiences of Palestinian academics and advocates of Palestine in American colleges. Beginning in March 2014, professor Abdulhadi was targeted by AMCHA, an extremist pro-Israeli group operating in a number of U.S. campuses, for a sabbatical research trip to Palestine. AMCHA erroneously accused Abdulhadi of misusing university funds and meeting with terrorist. The attacks on Abdulhadi were part of a coordinated campaign directed at academics critical of Israel and the faculty that undertook the primary research on Palestinians living under occupation. AMCHA's efforts were directed at silencing academics like Abdulhadi at a time when university students, faculty and staff have become far more pro-active in their solidarity and support of the Palestinian-led Boycott, Divestment and Sanctions movement (BDS).

In 2014, Palestine Legal staff "responded to 152 incidents of censorship, punishment, or other burdening of advocacy for Palestinian rights and 68 requests for legal assistance in anticipation of such actions." More alarmingly, Palestine Legal "responded to 140 such incidents and 33 such requests for assistance in anticipation of potential suppression in the first six months of 2015, the vast majority (89 percent in 2014, 80 percent in 2015) involving college students, university professors, or academic associations."

The most egregious case documented in the report was that of Professor Steven Salaita, who the University of Illinois at Urbana-Champaign fired. The Salaita's case witnessed pressure mounted by donors and elected officials on the chancellor who fired Salaita for a constitutionally protected free speech. Certainly, Professor Salaita's firing had nothing to do with his academic performance or scholarship but postings on his own Twitter account in opposition to the Israeli military assault on Gaza in the summer of 2014 was the cause.

Coming back to Abdulhadi's case, AMCHA attacks were intended to create a cloud of doubt and fill the Internet information pipeline with unfounded accusations, hoping that something might stick. As AMCHA's attacks intensified, so did the university's attempt to delay its coming to the defense of Professor Abdulhadi thus allowing the malicious attacks to fester with extensive false documentation hosted at the university's official website. More insidiously, AMCHA's campaign successfully shifted the discussion away from Israeli atrocities, continuous occupation, settlement expansion, demolishing of homes and structured violence that caused over 2,000 deaths in Gaza.

In a May 2015 letter to the university, Professor Rabab Abdulhadi highlighted the effects of the AMCHA campaign on her academic work. "Because the university administration sat on its hands for seven months while AMCHA continued to publicize its false accusations, I spent my 2014 sabbatical responding to those attacks and providing support and reassurance to my students whose learning environment was severely disrupted by the intensity and malevolence of AMCHA's attempt to destroy our program [the Arab and Muslim Ethnicities Diasporas initiative] and implicitly brand them, by association with me, as potential 'terrorists.' As a result I was unable to work on the book I had planned to write during my sabbatical and am now behind schedule in completing the research and publications necessary to advance to a full professorship."

Professors Salaita and Abdulhadi's cases as well as campaigns targeting Students for Justice in Palestine and Muslim Student Associations fit into a broader pattern and a well-funded strategy to suppress pro-Palestine activism on college campuses. Palestine Legal report broke down the various tools used to suppress Palestine free speech activities while contextualizing each with amble evidence. The report's areas include:- False and inflammatory accusations of anti-Semitism and support for terrorism - Official denunciations - Bureaucratic barriers - Administrative sanctions - Cancellations and alterations of academic and cultural events - hreats to academic freedom - Lawsuits and legal threats - Legislation - riminal investigations and prosecutions

Behind these attacks are a group of well-funded pro-Israel groups that are focusing on the goal of reversing the qualitative and quantitative shifts in support for Palestinians rights among college students. The published report correctly observes that "these strategies of suppression often have their intended effect: Intimidating or deterring Palestinian solidarity activists from speaking out."

In an effort to address the on-going suppression of free speech, a coalition of groups called for an international day of action on college campuses for a Free Palestine and ending the siege on Gaza. The day of action is set for Oct. 14, 2015, the anniversary of the 1953 Qibya Massacre. Also, October is indigenous people's month, which is an important moment to think and act in intersectionality toward the struggles of Native Americans, African Americans with the Black Lives Matter movement and the current attacks directed at immigrants. A free Palestine and ending the siege on Gaza Oct. 14th mobilization become symbolic of experiences far and near that intend to dehumanize, dispossess and otherize marginalized communities.
Last Update: Oct 01, 2015 2:04 am
RELATED TOPICS