Showing DAESH, convincing of the PKK 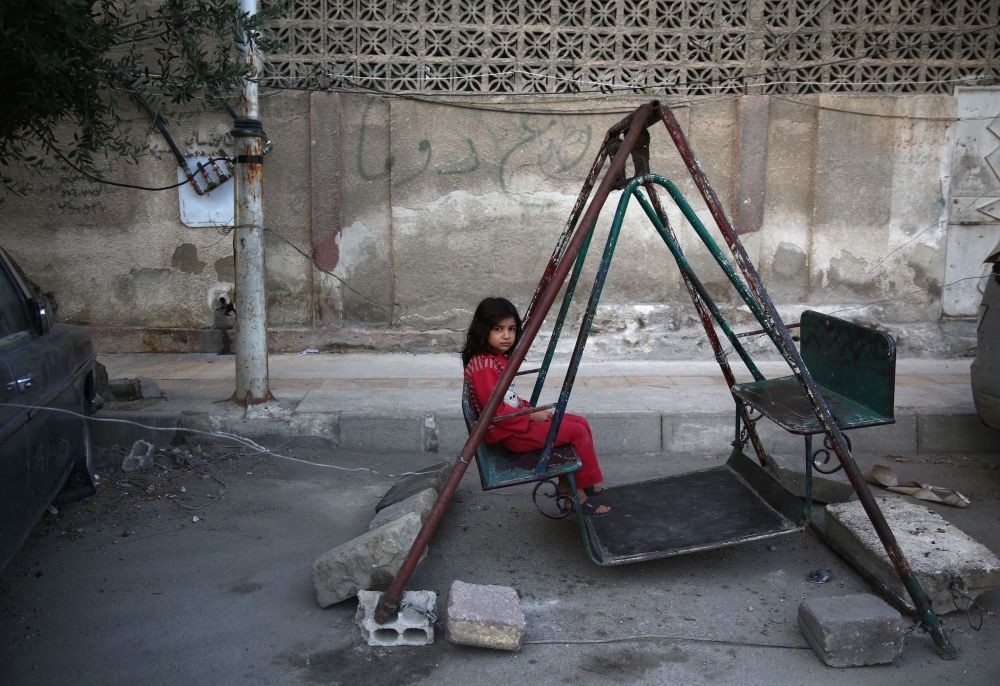 A Syrian girl playing on a swing in the moderate-held town of Douma, east of capital Damascus on the first day of Ramadan Bayram holiday that marks the end of the Muslim holy fasting month of Ramadan July 6, 2016. (AFP Photo)
by Hilal Kaplan Jul 08, 2016 12:00 am

From the group's inception, Turkey has been a country fighting DAESH. Since October 2013, 50,177 people from 145 countries, who were considered to be affiliated with DAESH, have been banned from entering Turkey and 3,603 others have been deported. A large number of DAESH militant cells have also been eliminated in raids.

However, Turkey abstained from initiating an airstrike on the organization, which has flourished in Syria and Iraq, which constitute the longest portion of Turkey's borders, mainly because it could estimate what would happen to it. Following the suicide bombings in May and June 2015, the Turkish Armed Forces (TSK) both started bombing DAESH in July 2015 and opened the İncirlik Air Base to U.S. planes as part of the U.S.-led anti-DAESH coalition.

Meanwhile, we need to remember and question the reasons why DAESH has not claimed responsibility for its attacks in Turkey and Saudi Arabia but has claimed responsibility for its attacks in other countries so far, even the massacre at a gay nightclub in Orlando. Let us also note that there was not any evidence showing that the Orlando shooting was carried out by DAESH other than the attacker, who it has been speculated was secretly gay, calling 911 and telling the emergency service that he was a DAESH member.

Moreover, we need to remember that France, which is the most prominent anti-Bashar Assad and pro-opposition country in the EU, withdrew into itself and was suffocated by political strife because of consecutive DAESH attacks last year.

Likewise, we need to foresee that Saudi Arabia, which is the strongest country providing support to the Syrian opposition in the Gulf region, will count DAESH as a primary threat and will have to push the threat of Iran's expansionism into the background.

Hosting 3 million Syrian refugees, Turkey is a country that must have a say in Syria's future. And its opposition to Assad and support for the Syrian opposition was no secret. Perhaps DAESH's attacks were aimed at Turkey pushing Assad and the Kurdish People's Protection Units (YPG), which Ankara considers to be a primary threat, to the background. However, President Recep Tayyip Erdoğan revealed in a recent speech in Kilis that he will resist that. Following the attack at Istanbul's Atatürk International Airport, American specialists especially began expressing more strongly that Turkey will come to the table with the PKK.

The funeral of PKK terrorist Mehmet Kocakaya, code named "Şirin," who detonated himself in a suicide bombing that killed 29 people in Ankara in February, was held a couple of days ago. The funeral ceremony was attended by Peoples' Democratic Party (HDP) Deputies Sibel Yiğitalp and Nursel Aydoğan from Diyarbakır, and Diyarbakır Metropolitan Mayor Gültan Kışanak. Put yourself in the shoes of an ordinary citizen living in Turkey for a moment and imagine how sermons in the foreign media that suggest that the HDP represents peace and that it is necessary to come to table with the PKK would make you feel.

The fight against DAESH and the PKK must remain in the same ranking in Turkey's order of priorities.

Hilal Kaplan is a journalist and columnist. Kaplan is also board member of TRT, the national public broadcaster of Turkey.
Last Update: Jul 08, 2016 2:35 am
RELATED TOPICS