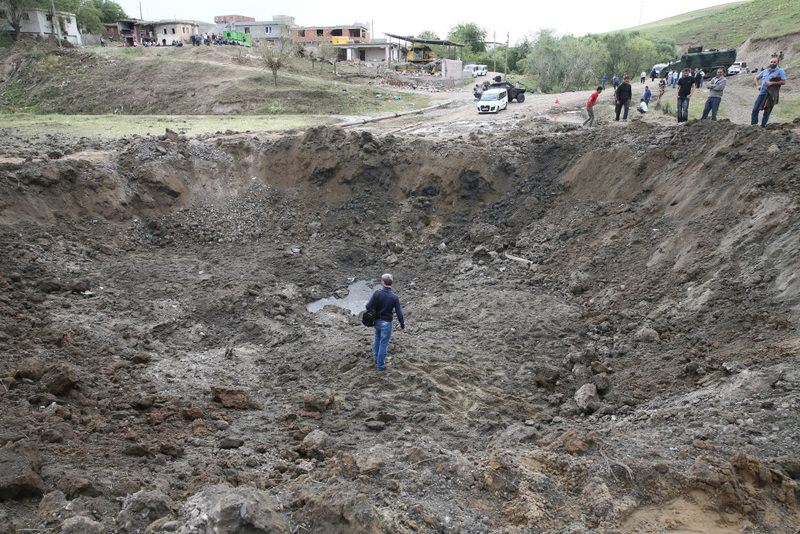 The huge crater caused by a PKK truck bomb comes as European Union calls on Turkey to narrow its legal definition of terrorism. (AA Photo)
by İbrahim Kalın May 14, 2016 12:00 am

For Turkey, visa liberalization for the Schengen zone is not worth placing national security and political goals at risk

The visa liberalization agreement seems in jeopardy after the EU put in conditions for Turkey to change its anti-terrorism laws. This is a bad move to say the least, and has the potential to derail the Turkey-EU road map that is crucial for rejuvenating Turkey's EU membership process and containing the refugee crisis.

After several months of negotiations, Turkey and the EU agreed to implement the visa liberalization program for Turkish citizens. This is part of a number of measures taken under the larger Turkey-EU road map drafted in response to the refugee crisis. As of March 20, Turkey has begun readmitting Syrian refugees trying to enter Greece and other EU countries illegally and sending one Syrian to Europe legally as part of the one for one policy. Anyone seeking illegal entry is automatically disqualified from any application.

This and a number of other measures along the Turkish and Greek coastal areas have drastically reduced the number of illegal migrants. Back in October, more than 5,000 people were crossing to Greek islands illegally every day. That number has now come down to less than a 100 per day. The readmission agreement is working. While the Syrian war continues and the refugee problem remains chronic, EU states are no longer feeling the pressure of thousands of illegal migrants appearing on the streets of European cities.

Visa liberalization for Turkish citizens was made as part of this broader agreement, but in fact was signed back in 2013 and was supposed to take effect in October of this year anyway. The date was moved to June as a gesture of goodwill.

But if the EU thinks that this is a gracious favor to Turkey for which it should do more than its share, it needs to think again. While Turkey welcomes the visa liberalization for the Schengen zone, it will not accept this at the expense of its national security interests and political priorities. Turkey should have been part of the Schengen visa system a long time ago. It is the fault of the EU that Turkey has not joined the EU visa regime while countries from the Gulf to Latin America have. Turkey is a negotiating member, has a customs agreement with the EU and has as many as 5 million citizens in Europe and is still not part of the Schengen system. How is this fair, or even logical?

But what is worse is the new demand to change Turkey's anti-terrorism laws at a time when the country is fighting terrorism on several fronts. The issue can be discussed as part of membership negotiations and EU chapters, but it is huge political misjudgment to present it as a precondition.

The reason is simple. Turkey has been fighting the PKK, DAESH, the Revolutionary People's Liberation Party Front (DHPKC) and other terrorist organizations. Over the last eight months, Turkey has lost more than 400 security forces and civilians to these terrorist organizations while killing hundreds of their members. Just yesterday, the PKK killed six soldiers in Çukurca, Hakkari while two others died when their helicopter crashed. The PKK carried out numerous attacks on security forces and civilians in Diyarbarkır, Hakkari, Mardin, Ankara and Istanbul. DAESH terrorists have also attacked Turkish targets, killing dozens of people. The city of Kilis has been under rocket attack by DAESH from Syria.

Turkey is determined to fight against these terrorist threats whether our U.S. and EU allies help us or not. The relevant question is how Europe can expect Turkey to change its anti-terrorism laws when it is surrounded by such security threats and carries the burden of the Syrian war, DAESH, the refugee crisis and resurgent PKK terrorism. Would the EU put similar demands on France and Belgium after these countries took stringent measures in the wake of the Paris and Brussels terrorist attacks? This is not even a topic for discussion. We support these countries in their fight against terrorism in all its shapes and forms, but it is also our right to expect our Western allies to do the same in our fight against terrorism, whether it is the PKK or DAESH.

Instead of pressuring Turkey on terrorism, European countries have to come clean about the PKK in their midst when they have dozens of PKK-related organizations working freely in European cities, making propaganda, recruiting terrorists, collecting money and sending it all to the PKK. Imagine what would have happened if Turkey and other Muslim countries had allowed al-Qaida and DAESH-affiliated groups in the guise of nongovernmental and civil society organizations to make propaganda, recruit new members and collect money for these terrorist organizations in their lands.

Turkey wants to implement the road map and help contain the refugee crisis. Getting visa-free travel to the Schengen region is a natural part of this process. But this cannot be imposed on Turkey at the expense of its national security priorities. The sensible thing for the EU to do is to support Turkey in its fight against terrorism rather than demand legislation that would encourage and embolden terrorist groups and their supporters in Turkey and Europe.