Chemical or not, Syria is dying 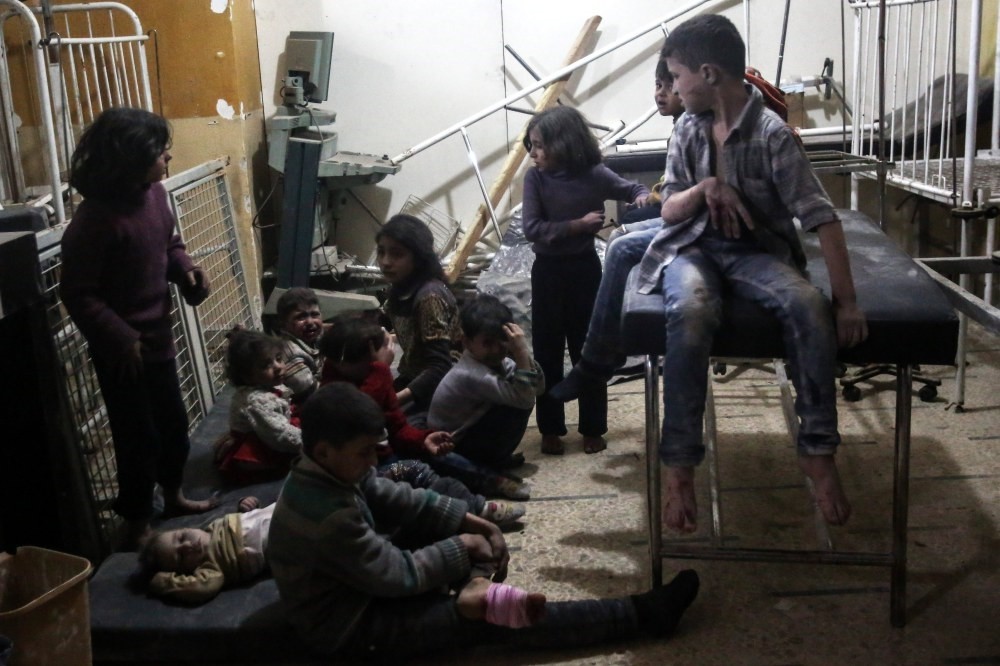 Injured Syrian children wait to receive treatment in a field hospital after airstrikes by the Assad regime on the moderate Syrian opposition-held Douma, Syria, April 4. (EPA Photo)
by İbrahim Kalın Apr 12, 2017 12:00 am

Syria is dying while "the world is watching." With chemical and conventional weapons used by the Assad regime, not only Syrian women and children but also our humanity is dying

Then U.S. President Barack Obama said, "I want to make it absolutely clear to Assad and those under his command - the world is watching," during a speech at the National Defense University in Washington on Dec. 4, 2012. This was a warning against the possible use of chemical weapons by the Assad regime. That attack came on Aug. 21, 2013 in Ghouta near Damascus, killing at least 1,500 people including women and children. Five years on, Assad has killed far more people than any other criminal in recent history. He has done it with both chemical and conventional weapons while the world was "watching."

The chemical attack in Khan Sheikhoun on April 4, 2017 was only the last episode of the Assad regime's genocidal policies. The U.N. has stopped counting the dead in Syria on the grounds that the numbers cannot be verified. The reality is that the U.N., like the rest of the international community and the most powerful nations in the world, has scored one failure after another in stopping the bloodiest war of the 21st century.

An Amnesty International report dated Feb. 22, 2017 notes that "by the end of the year (2016), the conflict had caused the deaths of more than 300,000 people." But the actual numbers are much higher, probably more than 600,000 killed by the Assad regime forces and the militia under their command. Neither the Geneva nor Astana processes have stopped the regime from using chemical and conventional weapons against its own people. Seeing the world "watching" its carnage and buying into the narrative of fighting the Daesh terrorists, the regime is likely to continue its current path of barbarism.

Those who survived chemical attacks, barrel bombs and mortar shells have become refugees and internally displaced people by the millions. The same Amnesty report notes that "some 4.8 million people fled Syria between 2011 and the end of 2016, including 200,000 who became refugees during 2016, according to UNHCR, the U.N. refugee agency. In the same six-year period, around 6.6 million others were internally displaced within Syria, half of them children, according to the U.N. Office for the Coordination of Humanitarian Affairs." In total, this is about half of the Syrian people. Furthermore, thousands have died in the cold waters of the Mediterranean and the Aegean Seas. According to UNICEF, more than 8 million Syrian children are in immediate need of aid — including more than 2 million child refugees.

The U.S. response to the Khan Sheikhoun chemical attack was a step in the right direction and a warning in action, not just words. Given the enormity of the ongoing killing with conventional weapons and the growing humanitarian crisis, however, this is not enough to either stop the war or provide protection for the Syrian people. It is arguably true that the Assad regime will not dare use chemical weapons again after the U.S. retaliation. But the focus on the use of chemical weapons is a blessing in disguise for the regime that will take this to mean that it can continue its war crimes and crimes against humanity with conventional weapons because the world acts only when it uses chemical weapons.

This unprecedented humanitarian saga has taken a heavy toll on politics and security. No other conflict in recent history has created as much instability as Syria. Those who think that the Syrian crisis can be contained within Syria or its immediate neighborhood are dead wrong. This is a war that poisons regional politics and undermines the global balance of power. It is the largest proxy war in recent memory. It enables non-state actors to establish fiefdoms of war networks, further weakening the already weak and failed states. It deepens sectarian tensions from Iraq to Lebanon and beyond. It continues to fuel the refugee crisis on a global scale with repercussions for the rising tide of xenophobia and racism in Europe. It remains a breeding ground for violent extremists and terrorists such as al-Qaeda and Daesh. Let's also remember that there was no Daesh in Syria just three years ago. It was the Syrian war and the constant instability in Iraq that have given a carte blanche to Daesh to become the monster it is today.

Furthermore, the Syrian war undermined the modern world system's claim to protect human dignity and prevent human rights violations. It undercut the discourse of democracy, freedom and pluralism vis-à-vis the Syrian people and their brothers and sisters across the Middle East and the larger Muslim world. It created tensions between two NATO allies, Turkey and the U.S. due to the Obama administration's policy of supporting the Democratic Union Party (PYD) and the People's Protection Units (YPG) – the PKK's Syrian branches. This list of regional and geopolitical troubles coming out of the Syrian war goes on.

True, there are no easy solutions in Syria, at least in the current stage it has reached. The regime's backers will not give up their support just because the U.S. bombed a regime air base. Nor will Assad heed the calls for him to step down, as Muqtada al-Sadr of Iraq did in a surprise call last week. According to his calculations, he is winning the war not only because he has the backing of Russia, Iran and Hizbullah but also because he sees an indecisive and weak international coalition against him. Furthermore, he can use Daesh as a tool to present himself as the lesser of two evils.

Turkey's proposal to establish safe zones for the Syrians inside Syria could have saved thousands of lives and prevented chemical attacks over the last three years but it has fallen on deaf ears on both sides of the Atlantic. Turkey currently hosts around 3 million refugees and continues to provide humanitarian aid to tens of thousands of people inside Syria.

There is absolutely no doubt that Daesh must be fought and destroyed. This monster has already inflicted more pain and terror than it should have been allowed. But it is a moral scandal and a political catastrophe to turn a blind eye to the other monster of the Syrian war, i.e., the Assad regime and its atrocities. With the G7 countries meeting in Italy on April 10, a common approach has emerged whereby Russia needs to be persuaded to change its approach to the Syrian conflict and stop supporting the Assad regime.

Syria is dying while "the world is watching." With chemical and conventional weapons used by the Assad regime, not only Syrian women and children but also our humanity is dying.