Turkey's priority is the well-being of the Syrian people 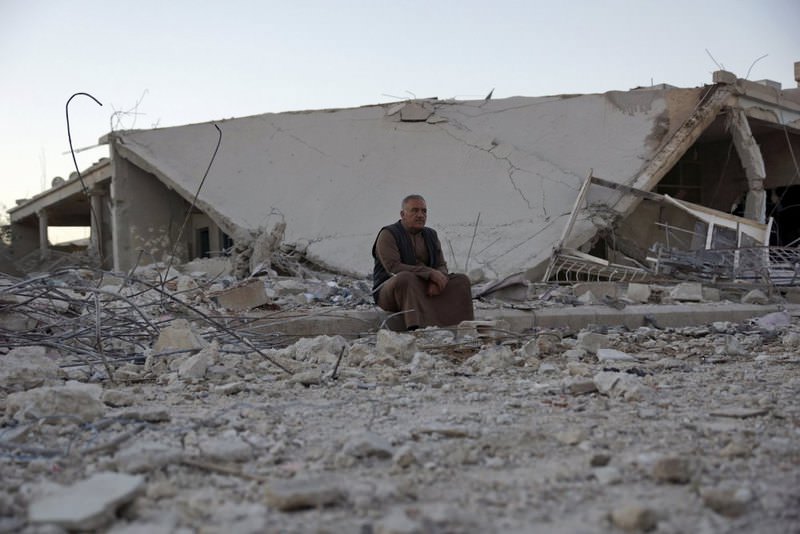 A site in the historic south Syrian town of Bosra al-Sham in Deraa province destroyed by the barrel bombs possibly dropped by forces loyal to Bashar Assad.
by İlnur Çevik Oct 23, 2015 12:00 am

Turkey has proven that its main consideration is the well-being of its Syrian brothers and sisters by accepting the 2.5 million refugees who fled the Assad regime and expending $7.5 billion for their care

What is the difference between Recep Tayyip Erdoğan of Turkey and Bashar Assad of Syria? The difference is that President Erdoğan cares for the Syrian people irrespective of their religious beliefs, their ideological affiliations or their ethnic background. All this is because of Erdoğan's strong Islamic beliefs that we should care and cherish all human beings because they are the creation of God. Assad does not have any regard for his own people, he detests the Sunnis and Kurds and he and his Baath regime has done everything in the past to oppress these people and eradicate them through massacres. Assad does not care if 100 or 100,000 Syrian children die as long as his regime rules from Damascus.

These are the hard facts about Assad that those who support him at home and abroad have to consider as developments push the international community to once again mobilize its resources to solve the mess in Syria.

Today the foreign ministers of Turkey, Russia, the United States and Saudi Arabia will be meeting in Vienna to discuss the future of Syria. This is a positive development especially after Russian leader Vladimir Putin hosted Assad in Moscow and probably gave him "instructions" on how he will behave in the future if he wants to survive for the time being in Damascus. All this has happened after Putin and Erdoğan had a frank discussion on the phone regarding Syria as well as other bilateral issues.

The fact that Erdoğan was not at all happy with the recent Russian military intervention in Syria that was designed to bolster the Assad regime and that he made this obvious in all his statements apparently prompted Putin to try to break the ice with the Turkish president. Erdoğan has made it clear to Putin that, when Russia helps to keep the Assad regime afloat and its military actions create an exodus of even more Syrians to Turkey, this is seriously hurting Turkey.

So it seems a new ray of hope is starting to appear and that actors are edging toward an agreement that will create an interim solution in Syria that will allow Assad to remain as president in the interim administration for only six months while the new power structure in Damascus unfolds. Turkey has given its blessing to such a formula provided that Assad does not have any executive powers. All this is the result of diplomatic activity that also includes Russia.

What is very sad in all this is that American influence and initiatives are seriously lacking. The fact that the Obama administration is on the way out and that Washington is not at all enthusiastic about getting involved in any serious effort in Syria except for bombing the Islamic State of Iraq and al-Sham (ISIS) with its jet fighters is bad news for everyone. If the Syrian crisis is to be solved we need serious American involvement. It was the U.S. that ended the Bosnia tragedy. Now it could be the U.S. putting an end to the Syrian catastrophe.

Turkey has proven that its main consideration in all this is the wellbeing of its Syrian brothers and sisters. Faced with similar situations throughout the world, no other country would have accepted 2.5 million people fleeing their despotic regime and spent $7.5 billion of its own taxpayer's money on their wellbeing. For this the Syrians have to thank the resolve of President Erdoğan, Prime Minister Ahmet Davutoğlu and the charitable people of Turkey.

While the Syrian mess is being sorted out the Americans and the Russians have to pay attention to Turkey's sensitivities on the Syrian Kurds, who have been saved from the clutches of Assad but who are now suffering at the hands of the Democratic Union Party (PYD) that only represents a minority of the Kurds but which has established an iron fist over the people of the region thanks to the armed strength of Turkey's PKK terrorists.
Last Update: Oct 23, 2015 2:09 am
RELATED TOPICS