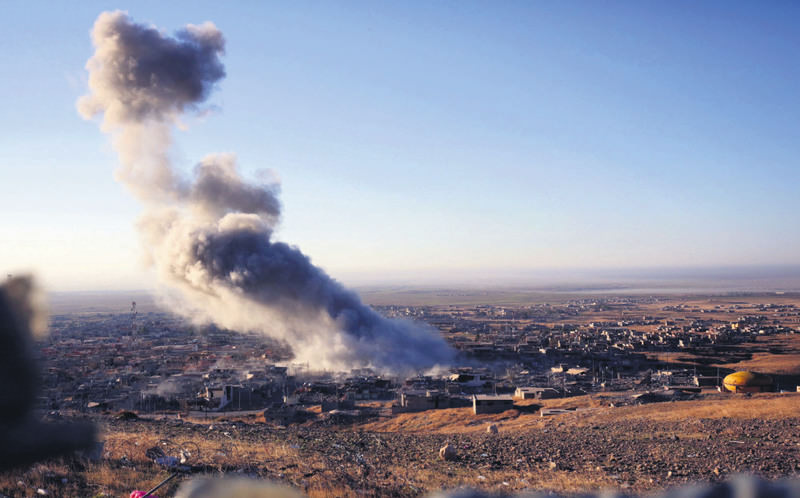 Smoke rises from the Northern Iraqi town of Sinjar, which DAESH militants occupied more than a year ago, killing and enslaving thousands of the people.
by İlnur Çevik Dec 09, 2015 12:00 am

The presence of Turkish forces in Baghdad to fight DAESH disturbs Tehran and Moscow, with one using the Iraqi government to spread its Shiite propaganda and the latter thinking only of the oil reservoir

Why is the Shiite-controlled central government of Baghdad making such a big fuss over the Turkish military presence near Mosul? They have set a deadline for the Turkish troop's withdrawal and are insisting that Turkey ends its presence in Iraq.

The answer lies in the fact that Iran has taken over Arab Shiite politics and is dominating Baghdad as the shadow ruler while the Iraqi government is simply a pawn.

Iran, with a push from Moscow, is trying to takeover Sunni Arab-dominated Mosul, which was once the power center of Saddam Hussein. Everyone is aware that there is no meaningful Iraqi army as such and that the Iraqi "forces" are dominated by Iranian mercenaries, militias and national guards because the Arab Shiites have fallen apart.

So Moscow and Tehran are urging the Iranian forces that pose as the Iraqi army to grab Mosul from the clutches of the DAESH militants.

On the other hand, there is the alliance of Turkey and the Iraqi Kurds, led by Masoud Barzani, who are also poised to combat DAESH. Turkey is helping the Iraqi Kurds actively.

Turkish forces, which have been in Northern Iraq since 1997 due to an agreement with Barzani, have now been deployed just outside Mosul and are training Barzani's peshmerga forces, who are also poised to enter Mosul. It was Barzani, who is a constitutional reality in Iraq, who invited Turkish forces into Northern Iraq. It was Barzani who signed a recent agreement with Turkey to bring more forces into the region to train the peshmerga forces as well as the Iraqi forces. Turkey has already trained 2,000 Iraqi soldiers and policemen to fight DAESH. Isn't the central government in Iraq aware of this.

The Iraqi government in Baghdad is fully aware of this situation and should realize that the Turkish presence in the region is to the benefit of all the Iraqi people, whether they are Arab Sunnis, Shiites or Kurds. Yet they are being urged by Tehran and Moscow to oppose Turkey and demand the withdrawal of Turkish forces.

Mosul should be controlled by the Iraqi people and not by those who are exploited and manipulated by Iran and Russia. It has a Sunni fabric and if this is destroyed by the Shiites it will create even deeper resentment among the Sunni Arabs and thus will ruin the prospects of Iraqi unity in the future.

The Barzani forces should be able to defeat DAESH and enter Mosul. Thus they will preserve the Sunni identity of the city and prevent the Shiite Arabs ruining the fabric of the area.

Unfortunately, we are observing Shiite expansionism fueled by Iranian intransigence. Turkey on the other hand has entered the power game in the region, which is a welcome development.
Last Update: Dec 09, 2015 2:22 am
RELATED TOPICS