Ordinary Kurds suffer in the war of the ditches 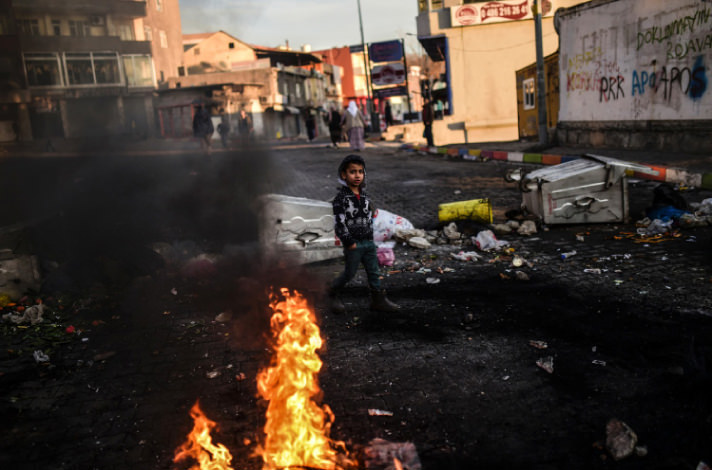 Feeling uncomfortable with the collaboration between the state and Kurds on a mission to end its terror in the southeast of Turkey, the PKK does everything to turn people's life into hell

The PKK is displaying all the characteristics of a hard-headed terrorist organization as it continues its campaign to terrorize the local people in southeastern Turkey and force them into immense hardships.

The PKK wanted to turn the situation in eastern and southeastern Turkey into a similar situation to the one being experienced in northeastern Syria where its Syrian-Kurdish extension, the Democratic Union Party (PYD), is setting up cantons and laying the foundations for an autonomous region in Syria.

So they entered towns, terrorized the local people and then wanted to impose their own rule while turning the settlements into arsenals and defying the Turkish state. They dug ditches in and around the towns; they set up barricades and turned life into a hell for the local people. People were dissuaded from sending their children to school; Muslims believers were dissuaded from praying and attending mosques. Imams were thrown out of mosques and most were turned into ammunition depots.

All in all, the PKK tried to create pockets of self-ruled areas as if the Turkish state did not exist especially when Turkey was plunged into a period of uncertainty after the June 7 elections when the Justice and Development Party (AK Party) failed to win a majority. Despite the uncertain political climate, the government reacted swiftly and ordered security forces to enter the towns and restore law and order. Since then, the AK Party managed to win a majority in the Nov. 1 elections and thus erased all the uncertainties that existed.

Now the government of Prime Minister Ahmet Davutoğlu has launched an all-out struggle against the PKK and its policy of secession.

Security forces are declaring curfews in the cities and are entering each and every pocket of descent and are wiping out the PKK presence there. Yet, the process is too slow and painstaking. Why is this so? The answer lies in the fact that contrary to the 1990s, when state forces were combatting the PKK in these regions with little regard for the local population, now the security forces have been ordered not to harm the local people and combat the PKK with as little inconvenience to the local people as possible.

What is sad, however, is the fact that the locals are still suffering massive hardships. The PKK does not care for these people and on the contrary wants them to feel as much hardship as possible so that they feel alienated and feel deeper enmity to the Turkish state. However, the local people realize the sinister motives of the PKK and that is why, despite the PKK's threats and harassment, several people voted for the AK Party in the Nov. 1 elections, helping it to win a landslide.

On Tuesday, Prime Minister Davutoğlu told AK Party deputies at a group meeting that the government will help the suffering tradesmen of the affected areas by deferring their tax payments and the premiums they pay for their workers. He also announced that students who could not go to school because of the clashes will be given additional courses and will be sent to safer areas to complete their education.

All this is fine but not enough. Turkey needs to extend more help to the local people of southeastern Turkey who have been caught amid the PKK terror and Turkey's efforts to restore law and order. Let us hope what the prime minister has announced is a good first step for many more similar measures.

One last note: Kurdish nationalist Peoples' Democratic Party (HDP) Co-Chair Selahattin Demirtaş is going to Moscow... The question that comes to mind is: Is he going there to thank the Russians for the support they have extended to the PKK to destabilize Turkey?
Last Update: Dec 23, 2015 1:53 am
RELATED TOPICS