So why is HDP silent over the Istanbul bombing? 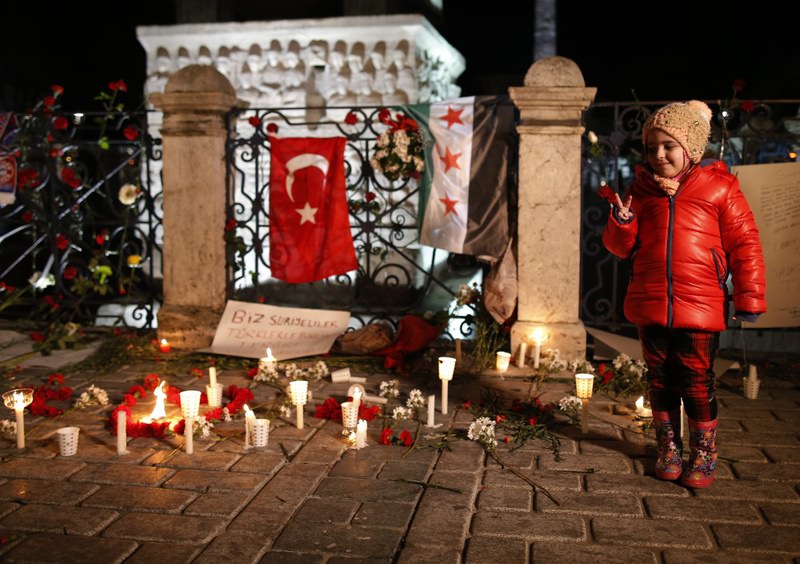 A child standing beside candles during a vigil at the site of Tuesday's explosion, Istanbul's historic Sultanahmet district.
by İlnur Çevik Jan 15, 2016 12:00 am

HDP Co-Chair Demirtaş and his party who were so quick to react to DAESH's twin explosions in Ankara whose victims were mainly Kurds, has been extremely silent over the Istanbul bombings by the same terror organization whose victims this time are German tourists

The Kurdish nationalist Peoples' Democratic Party (HDP), which is represented in the Turkish Parliament, has always been very vociferous when bombs or attacks of all kinds target Kurds claiming it is the champion of all righteous causes in the country. The party won votes claiming it is the party of Turkey and not a political movement based on ethnicity. Yet everything they have done for the past year has been to promote terrorist actions of the PKK terrorist organization in Turkey, encourage people to take to the streets and create chaos and anarchy in eastern and southeastern cities and townships as well as in Istanbul and be the guardian angels of the militant Syrian Kurds.

On Oct. 10, 2015 a bomb similar to the one used in Istanbul to kill tourists was used in Ankara outside the main train station when two suicide bombers of the DAESH terrorist group plunged into crowds gathering for a mass rally in the heart of the capital. One-hundred-and-three people died in the incident and HDP Co-Chair Selahattin Demirtaş immediately accused the state of engineering the blast whose victims were mainly Kurds who had arrived in Ankara to take part in the mass rally.

Demirtaş raised hell accusing President Recep Tayyip Erdoğan and Prime Minister Ahmet Davutoğlu for being responsible for this attack and said in the future these two would be tried by an international war tribunal for engineering these atrocities. He and his party accused the government for failing to protect the rally crowds and allowing the DAESH terrorists a free hand.

Now DAESH has struck at the heart of Istanbul killing about 10 people and wounding 15 who were mainly German tourists. Demirtaş who was so prompt in reacting to the Ankara bombings has been extremely silent. His HDP has been silent. His militant affiliates have been silent.

So what happened? Did they realize that their excessive reactions were meaningless and counterproductive and thus learned a lesson from their failures in the Ankara bombing or is there another reason?

At first when the identity of the suicide bomber was still a mystery there were speculations that the HDP and its loose-mouth leader feared that their affiliates in the PKK terrorist organization may be behind the attack and thus decided to shut up. The fact that PKK terrorist leaders had ordered their militants to get active in major cities recently was the cause of this concern.

But when it became clear that a Syrian Arab national was the suicide bomber the HDP still remained silent. Then it became clear that the HDP is not interested in such a bomb attack that kills Turks or Germans simply because their cause is ethnic and their target is secession and anything that does not fall into their line of interest does not concern them. They have no humane feelings or compassion for other fellow human beings.

They have created havoc in Turkey claiming that the northern Syrian town of Kobani is about to be conquered by DAESH and that the Turkish government is doing nothing to help the Kurds there. They ordered their militant supporters into the streets creating massive disorder in the streets of Turkey that ended with 50 deaths. However, they did not utter a word when again in northern Syria DAESH butchered the Syrian Turkmens. They did not utter a word when Russian planes bombed Syrian Turkmens. On the contrary they applauded Russia. This the true face of the HDP and Demirtaş, this is the mentality they really represent.
Last Update: Jan 15, 2016 2:10 am
RELATED TOPICS