Backers of the PKK and PYD shoulder the responsibility 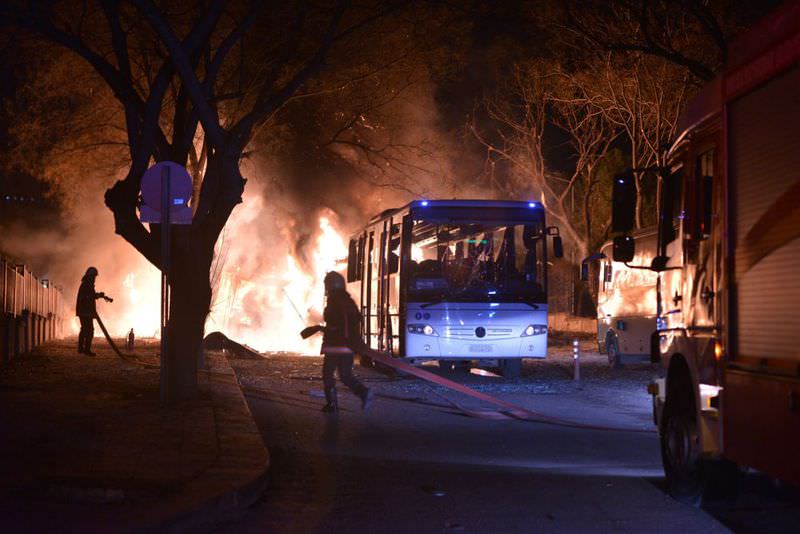 Firefighters trying to extinguish flames following an explosion after a terror attack by the YPG targeted a convoy of military vehicles in Ankara, killing 28 people.
by İlnur Çevik Feb 19, 2016 12:00 am

The bomb attack in the heart of Ankara in a location just a short distance from the military headquarters, Parliament and the ministries left 28 people dead and 61 wounded. There are some claims that DAESH, which was behind the Oct. 10 bombing in Ankara that left 103 people dead, may be behind this atrocity while there are strong indications that the Kurdish PKK terrorist organization and Syrian Kurdish Democratic Union Party (PYD) and its armed wing People's Protection Units (YPG) are in fact the culprits.

The PKK has been carrying out its terrorist campaign in towns and cities and it is only normal that it would try to hit Turkey in the heart in view of the intensified counterterror campaign carried out by the government in the southeastern regions of Turkey. The fact that the target was the service buses that transport military personnel from the military headquarters shows that the PKK is taking revenge for the mounting PKK casualties in view of the successful counterterror campaign carried out by the special units of the police and the military.

Prime Minister Ahmet Davutoğlu says there is strong evidence that the PYD and its sidekick YPG were behind the Ankara bombing. That is no surprise. Turkey has been hitting the YPG forces who are trying to capture the Azaz region and Syrian Kurdish militants have suffered serious casualties.

The fact that on Thursday Turkish Air Force jets have started bombing critical places in Northern Iraq where PKK leaders are suspected to be holed up shows that Ankara is also convinced that the Kurdish terrorists are behind the latest Ankara massacre.

It is time Turkey hit back at the PKK masterminds and if necessary at those in northern Syria who are actively supporting the Kurdish terrorists.

That is why President Recep Tayyip Erdoğan has said "if they are trying to test our patience they should be aware that we have come to the end of the road."

But there is also another aspect that we also have to speak up loudly. It is a fact that the PKK and its sister organization the PYD in northern Syria are being actively supported by an international consortium. The fact that the massive arms and ammunition captured from the PKK militants come from more than 20 countries with the United States and Russia leading the list speak for themselves.

So when a PKK bombs goes off anywhere in Turkey the Turkish people do not only curse the PKK or the PYD but many also blame the U.S. and Russia as well as an array of others for the killing of innocent people.

The U.S. has "strongly" condemned the bombing in Ankara and said it will stand shoulder to shoulder with Turkey. The U.S. ambassador in Ankara has said he is shocked.

Are these people serious? The Turkish public do not regard such statements as serious especially in view of the fact that Washington has refused to acknowledge the PYD and YPG as terrorist organizations. It is no secret that people coming into Turkey from the PYD area of northern Syria have been caught carrying explosives and bomb-making material. Most have been caught but the ones who managed to slip through have reportedly been used in the Ankara massacre. Turks feel the American declarations resemble the tears of a crocodile as they are seldom supported by actions.

The Russians have also condemned the terrorist attack and yet they too are supporting the PYD just like the murderous Assad regime. The time has come for people to put aside all the insincerity as their actions will now show their true face in view of the Ankara bombing.
Last Update: Feb 19, 2016 4:59 am
RELATED TOPICS