A nation that deserves the Nobel Peace Award 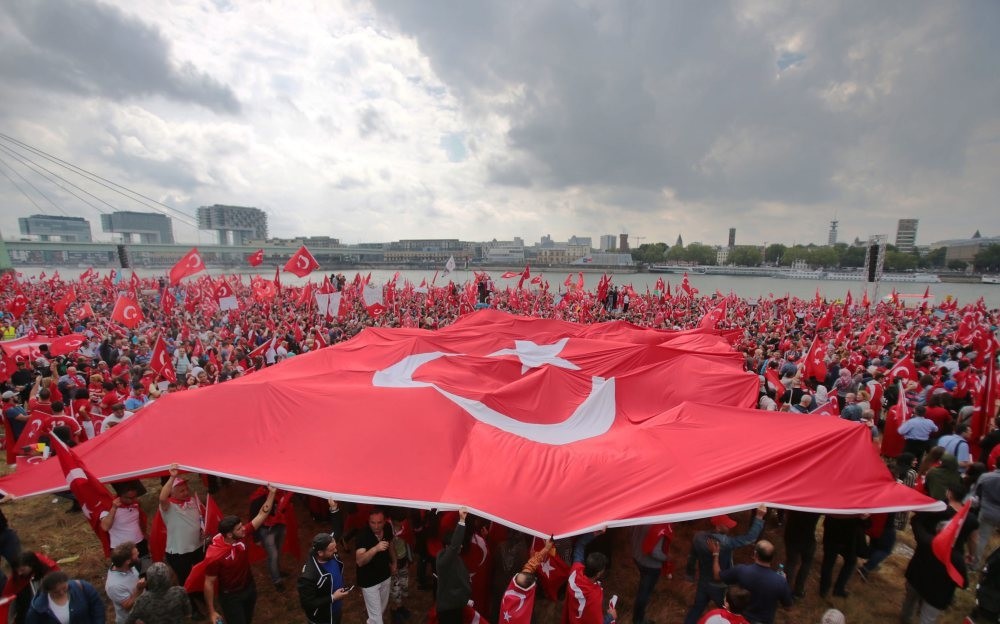 People waving flags at a pro-democracy rally against the failed coup attempt, Cologne, Germany, July 31.
by İlnur Çevik Aug 02, 2016 12:00 am

Standing against the coup attempt, the Turkish people should be nominated for the Nobel Peace Prize

July 15 will go down in the pages of history as a dark day for Turkey as a group of coup plotters tried to grab power in a bloody military takeover and failed when an unarmed nation rose to the occasion and halted their tanks, their armored vehicles, helicopter gunships and F-16 jets in Ankara and Istanbul.

Under normal circumstances Western democracies would hail this heroic act by the Turkish people as an unprecedented show of democratic maturity and a reflex to defend the supreme values of a civilized country and would promote the idea that the Turkish people should be nominated for the Nobel Peace Prize. Yet, we have not even seen a hint of this.

On the contrary, we have seen that both the European Union and the United States have not seemed so happy about the Turkish nation foiling a coup attempt by elements in the Turkish military affiliated to the Gülenist Terror Organization (FETÖ) led by Fethullah Gülen.

Gülen, who has been living in self-exile in Pennsylvania, has been accused of plotting the coup with the help of "some influential people" in the West, especially in the U.S. Dozens of confessions by the coup plotters suggest that Gülen masterminded the coup through the people he successfully managed to install in the military over the years. So with strong evidence to suggest that he is a prime suspect for staging the coup one, would have expected the Americans to tell the man to shut up and stop meddling in Turkey's affairs. Instead we see that he is being put on CNN International to have the audacity to say that the coup was a "Hollywood scenario" and that everything was fabricated.

The attitude of U.S. authorities is unacceptable and a cause for concern. They should stop giving the impression that they are actually manipulating this so-called cleric who they wanted to mold as the Turkish version of Egyptian junta leader General Abdel-Fattah el-Sissi. Americans have a very bad track record after giving their blessing to the coup in Egypt and installing a dictator. Now the Turkish people believe that they want to do the same in Turkey and their attempt failed badly. A survey by the MAK Consultancy Company shows that 84 percent of the Turks surveyed believe foreign powers were behind the coup staged by FETÖ and that 70 percent say the culprit is the U.S. This is a dangerous trend.

We need the U.S. as much as they need us. So if some people in the U.S. have been involved in the coup attempt in Turkey they should be caught and brought to justice as this constitutes a major crime according to American law.

Are there any "ifs" and "buts" that this was a bloody coup attempt to topple the administration of President Recep Tayyip Erdoğan? Can anyone say that with all the violence involved against Erdoğan and his supporters that the coup was a conspiracy, like a Hollywood movie? Can they say the 274 people who were killed by the coup plotters were actually playacting? The suggestion alone is an insult to the Turkish nation.

This man Fethullah Gülen is the greatest actor and criminal of all time. He pretends to be ill and fragile and yet he has the stamina of an ox. He is faking his fragility and his playacting in front of TV audiences is notorious. He does deserve the Oscar for best actor in an attempted coup movie.

Meanwhile, we are also observing an extremely negative attitude against Turkey in the EU. None of them seem to acknowledge the heroic resistance put up by the Turkish people on the night of the failed coup and the unprecedented fight of a nation to protect its democracy.

Instead they are claiming that the state of emergency is unnecessary and is being used by the government to punish the opposition. Yet, we clearly see that with the state of emergency the government has used its special powers to decree laws that only serve to turn the military into a civilian controlled entity, which is the case in all European countries. The crackdown has solely been against the FETÖ elements who infiltrated the state system.

Meanwhile the government and the opposition have swiftly mended fences and established a meaningful dialogue that should have been applauded by the EU. That too has not happened. President Erdoğan has withdrawn all the libel cases against those who insulted him as a goodwill gesture. Yet, the EU is still on the wrong course.

Germany has banned Erdoğan from addressing rallying Turkish masses in Cologne via satellite, Sweden has insulted the democratically elected government of Turkey that survived a coup attempt and Austria is trying to dissuade people from travelling to Turkey with banners at its airport in Vienna. It is as if they all lament FETÖ not succeeding in toppling the government through a coup...

We are a resilient nation. We will put all this behind us. Yet we will not forget the enmity and treason that some people have displayed toward us in Europe and the U.S.
RELATED TOPICS