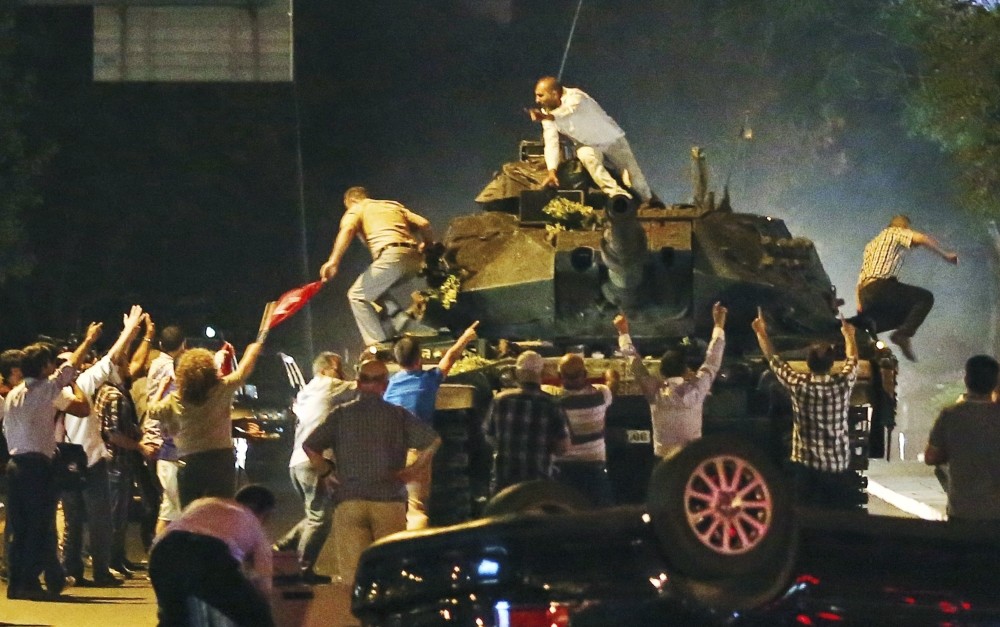 A tank moving into position as Turkish people clamber onto it, attempting to stop the Gu00fclenist military coup, in Ankara, July 16.
by İlnur Çevik Aug 17, 2016 12:00 am

Turkey went through a massive trauma on July 15 after military personnel secretly affiliated to the Gülenist Terrorist Group (FETÖ) launched a bloody coup. They failed thanks to the Turkish people who stood up to the tanks, armored vehicles, jets and helicopter gunships.

President Recep Tayyip Erdoğan has been forcefully pointing out the threat posed by the Gülen group since 2012 and had been urging an all-out fight throughout the country, including within the state apparatus. Yet no one, including the president, imagined the depth and power of the infiltration. The Gülen group had infiltrated every state office, including the judiciary, police and the Armed Forces, in a secret and sinister manner.

We knew about the infiltration of the police ranks and the judiciary, as they were as clear as daylight. Yet no one imagined how the upper echelons of the Turkish Armed Forces had been occupied by these vicious people and how a meager non-commissioned officer was actually bossing around colonels and generals.

In the state, the Gülen gang infiltrated the computer centers, personnel departments and the investment departments of ministries and state organizations. They were controlling the information flow, money flow and appointments for nearly a decade. These people had entered state service through rigged exams where the answers to questions were handed to candidates by the Gülen mob.So now that it is clear that FETÖ was behind the unsuccessful coup plot, it is only normal to weed out their members in the state apparatus and bring them to justice. That of course means a massive crackdown. This is an extraordinary situation that requires extraordinary measures hence the declaration of a state of emergency. Since the declaration of the state of emergency, has anything changed in Turkey? Has there been a dramatic change in the daily lives of our people? Do people feel oppressed and repressed? The answer is no. This nation has seen what oppressive regimes are like after each and every coup in Turkey in 1960, 1971, 1980 and 1997. They know what oppression is. We know how people have been rounded up after every coup, how martial law has made life hell for citizens and how people have faced arbitrary persecution. We have experienced curfews in Ankara and Istanbul and have been treated to the horrors of martial law.

What we are experiencing today is a "light" version of a state of emergency where only those who are members of FETÖ are being taken into custody and arrested while citizens go about their daily lives without hindrance.

We have to refresh the memories of those who cannot remember the past.

France declared a state of emergency and has been extending it over a meager terrorist attack, yet Turkey suffered a massive coup plot, so why are the Western European leaders raising so much of a fuss?

Turkey has to clean up the mess and the massive destruction FETÖ has caused in the state system. We are running the country with government decrees with the power of law that allows us a speedy reaction to urgent requirements. Once the mess is cleared away Turkey will return to normal rule.
RELATED TOPICS