It's showtime for Turkey in Syria and Iraq 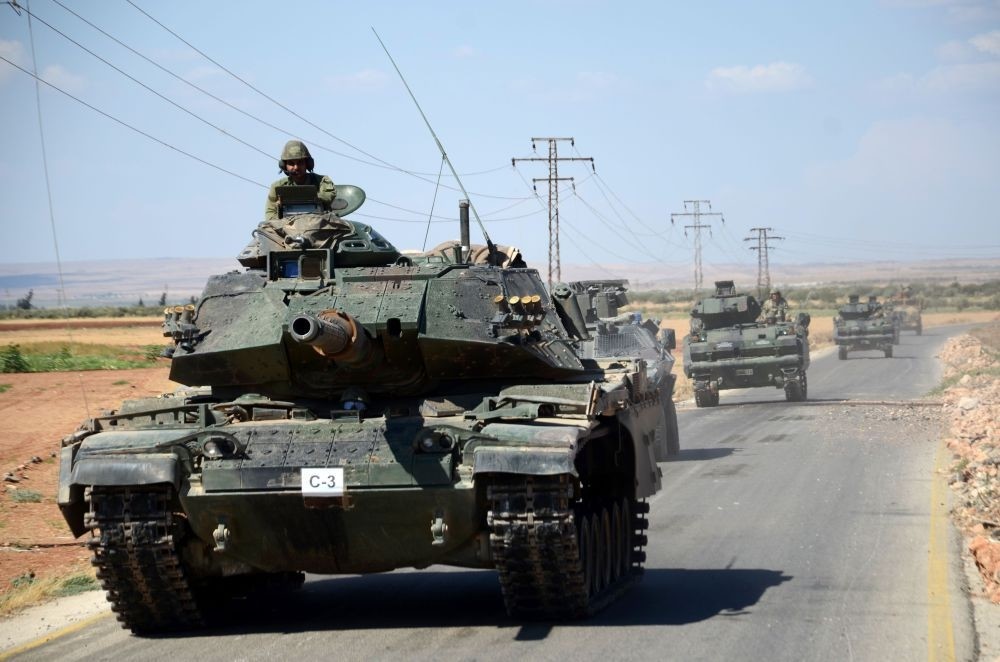 Turkish troops driving their tanks on Sept. 4, 2016 on a road near the Syrian village of al-Waqf and some 3 kilometers south of al-Rai, the small border town with Turkey.
by İlnur Çevik Sep 09, 2016 12:00 am

Turkey's presence is a ray of hope for two beleaguered countries, Syria and Iraq, to secure their territorial integrity

With the massive success of the Turkish Armed Forces (TSK) pushing into northern Syria and clearing away DAESH terrorists from the borders areas neighboring Turkey in only a matter of two weeks has impressed our friends and foes alike so much so that there are growing demands for Turkey to cooperate with the United States for capturing the Northern Iraqi regional capital of Mosul and Raqqa in Syria from DAESH.

Turkey, using the Free Syrian Army (FSA), has beat the daylights out of DAESH in northern Syria and its forces are now moving deeper into the south to secure al-Bab and Manbij.

For months, the forces of the Syrian Kurdish Democratic Union Party (PYD) led by Salih Muslim has been toying around for months with the Americans, creating the image that they are fighting DAESH in earnest to push them out of northern Syria. It took Turkish forces backed by Syrian Arabs and Turkmens to capture Jarablus in only 12 hours while the PYD has been trying to get hold of the city for months.

The PYD has fooled the Americans for years claiming it can make an impact against DAESH with their fighting force of PKK terrorists. The U.S. gave arms and ammunition to the PYD as well as military training. It sent its advisors and fighters to help the PYD cope with DAESH. It is clear American officials have been buttered up by the PYD with presents and promises. Yet the PYD has not been able to make any progress against DAESH besides creating a Kurdish enclave to the east of the Euphrates River up to the Iraqi border.

The Americans seem to forget that it was with their own efforts (aerial support), and Turkish and Iraqi peshmerga support that the PYD defeated DAESH in Kobani after being on their last legs. So the Americans should have understood there and then that the PYD was a paper tiger.

So now the Americans have also realized that while the PYD has been trying to make an impact and retake Raqqa from DAESH, it is just beating around the bush and not achieving anything. They have to turn to Turkey and the FSA.

This situation means that the PYD will be marginalized and could even become redundant. Such prospects are alarming for the PYD, the PKK and some of their Western supporters.

The situation in Mosul is no better. The Kurdish forces of Masoud Barzani proved helpless against the advancing DAESH forces who were on the verge of capturing Irbil. So it took Turkey and the U.S. had to save them from the rope. Since then the PKK has been moving in on Sinjar to "help" the people against DAESH, much to the anger and frustration of Barzani. Now the PKK fighters refuse to return to the Qandil Mountains in Northeastern Iraq and have become a headache for Barzani.

The Americans know well that neither Barzani's forces nor the Iraqi army are capable of liberating Mosul. So once again Turkey's good services are needed. Turkey already has a force in Northern Iraq and is training some elements of Barzani's peshmerga forces and the Iraqi army.

So once again Turkey's services will be needed to set the record straight in Syria and Iraq. This is the time when Turkey starts help reshape the destiny of these two beleaguered countries. It is also the time when Turkey seeks to create some Turkmen enclaves in Telafar, Tuzhurmatu in Northern Iraq and one in the south and east of our Hatay province across Syria.
RELATED TOPICS