People of the southeast want to feel state protection 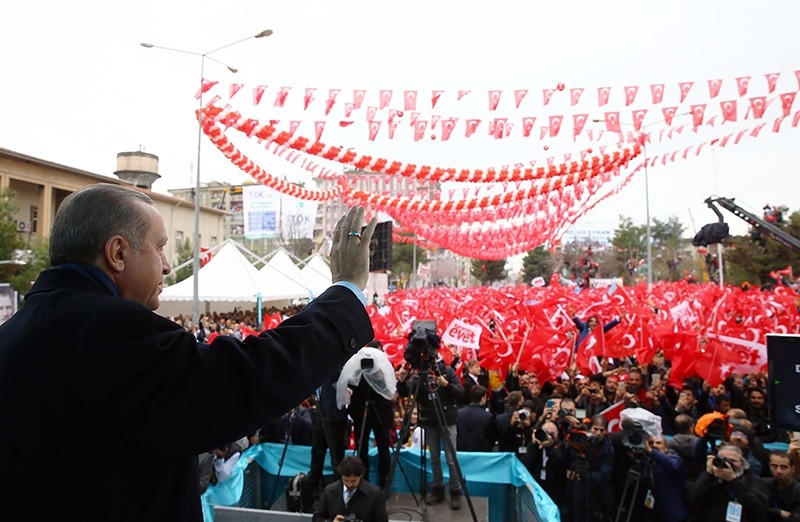 President Erdou011fan seen waving at supporters his hand during an inauguration ceremony in the predominantly Kurdish southeastern city of Diyarbaku0131r, Turkey, March 30. (AA Photo)
by İlnur Çevik Apr 11, 2017 12:00 am

Fed up with clashes between security forces and PKK terrorists, Turkish citizens of Kurdish origin are determined to vote ‘yes' in Sunday's referendum

The people of southeast Turkey, who are predominantly our citizens of Kurdish origin, are fed up of being sandwiched between the intransigence of the PKK secessionist terrorist organization and the state forces battling to eradicate them.

The PKK disregarded the well-being of the people of the region, used their cities and towns to wage a secessionist war and used their houses and even the bodies of our Kurdish citizens as human shields. People lost their homes and their assets as the terrorists fought battles to create secessionist enclaves in southeastern Turkey in the summer of 2015.

Instead of grabbing the opportunity to make peace with the state and let the politicians create the solutions for the problems of the region, the PKK showed total disregard for the Kurds trying to represent the region in Parliament.

The end result was fatal. The PKK lost badly, it was defeated in all the cities and towns and lost its militants, but that was nothing compared to the suffering of the local people. Most had to flee their homes and even their towns losing all their belongings. Now they blame the PKK for this mess.

The PKK had been pressuring people into certain political preferences and threatening to level their villages if they did not vote for the politicians that the PKK backed.

The state has fired PKK-sponsored mayors from the Peoples' Democratic Party (HDP) and has sent receivers who have restored public and municipal services in most southeastern cities and towns. The PKK had used the municipalities to provide jobs for PKK sympathizers and funds for the terrorist organization to carry out its activities in the region. Those funds belonged to the taxpayer, sent to the region from Ankara simply because the region does not generate enough income to finance state and municipal activities in its cities.

Many Muslim Kurds in the region say they were dissuaded from going to mosques and praying simply because the Marxist PKK detests religion.

Now the people say they want to be sure that the PKK will not be allowed to sneak back into these cities and terrorize the people and force the masses to adhere to their whims.

Turkey has been battling the PKK in recent months with added effectiveness. PKK violence has died down markedly. Some say this is because the PKK does not want to step up the violence and anger the local people to use a "yes" vote. Others say the security forces have changed their tactics and system of battling the PKK, which has proven extremely effective. They also say that the security officials and policemen from Fetullah Gülen's gang who were secretly cooperating with the PKK have been weeded out of the police force, making the state forces much more effective in the anti-terrorist fight.

The people are inclined either to not go to the polls during next Sunday's referendum on the constitutional changes that will create a presidential system or to vote "yes" to approve the changes. That is why the PKK is hopping mad and is threatening the people to vote "no."