Lopsided campaign in favor of ‘no' vote 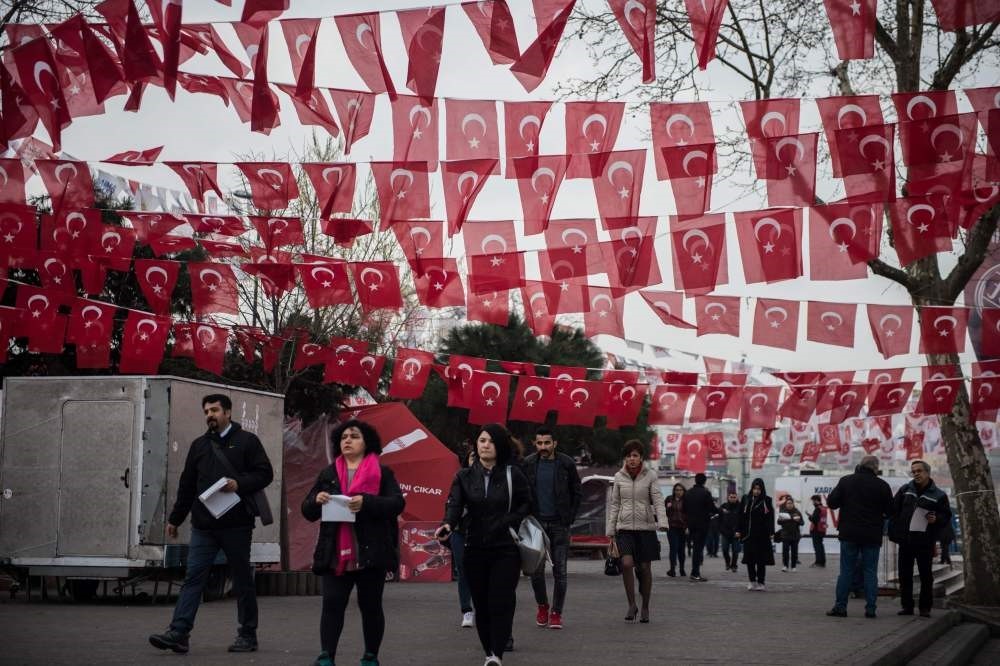 People walking under Turkish flags in an Istanbul street two days ahead of the referendum on whether the current post-coup constitution should be changed or not. (AFP Photo)
by İlnur Çevik Apr 14, 2017 12:00 am

The main opposition party is trying to cover up the irrationality of its theory against the constitutional referendum, which is why it has started to claim that there is a lopsided campaign in the country

The main opposition Republican People's Party (CHP) Chairman Kemal Kılıçdaroğlu claims there has been a lopsided campaign that favors the "yes" vote for the upcoming referendum on the constitutional changes that will create a presidential system.

We strongly beg to differ.

The campaign was lopsided and favored the "no" votes in Europe where the leaders of many countries, led by Germany, Austria and the Netherlands, rallied for "no" votes and even used their official press to drum up support against the constitutional changes in Turkey by concentrating on anti-Erdoğan sentiment.

The state owned ARD TV ran daily programs even in Turkish, opposing the constitutional changes and openly calling for a "no" vote. The German press was full of slander and insults against President Recep Tayyip Erdoğan, backing the "no" vote in the referendum.

German authorities as well as their counterparts in Europe even allowed the PKK, which is on Germany's terrorist list, to stage rallies throughout major cities to promote a "no" vote. They simply and openly intervened in our internal affairs.

As if this was not enough, European leaders banned Turkish ministers from entering their country to explain the constitutional changes to the Turks living in their respective countries. One minister who managed to slip into the Netherlands to address the Turks in Rotterdam was dragged to the border and expelled from the country to Germany.

Internationally accepted diplomatic rules were violated in an unprecedented manner.

Thus, Turks only managed to hear one side of the story and not the other. This was a terrible violation of their democratic rights and the culprits were the European leaders. Yet, as a reaction, the Turks of Europe flocked to the polling stations and according to the exit polls, more than 66 percent voted "yes" for the constitutional changes.

The campaign in Turkey was also lopsided.

On the one side there was strong resistance from the bureaucratic oligarchy that did not want a new system, as this would mean the end of their dominance in state affairs, where they run the country behind the scenes according to their whims.

There was the pro-opposition press, which gave massive coverage that vehemently opposed the changes and rallied for a "no" vote.

There was the CHP that rallied strongly against the constitutional changes but did not spend any of its money on an ad campaign to bolster the "no" votes despite the fact that the party is rich and had the means to do so. Why? Because the CHP had nothing to say that would sound logical to the people and thus preferred to deceive the people through lies and force the president and the prime minister to try to explain to the people that these were lies. All the media covered these lies.

Even some people in the ruling Justice and Development Party (AK Party) did not perform well in the "yes" campaign and preferred seeing President Erdoğan and Prime Minister Binali Yıldırım rush around the country rallying for a "yes" vote.

So how can anyone really say it was a lopsided campaign, so much so that those opposing changes did not get a chance or the means to express themselves properly?
RELATED TOPICS