Manchester attack another failure in global combat against terrorism 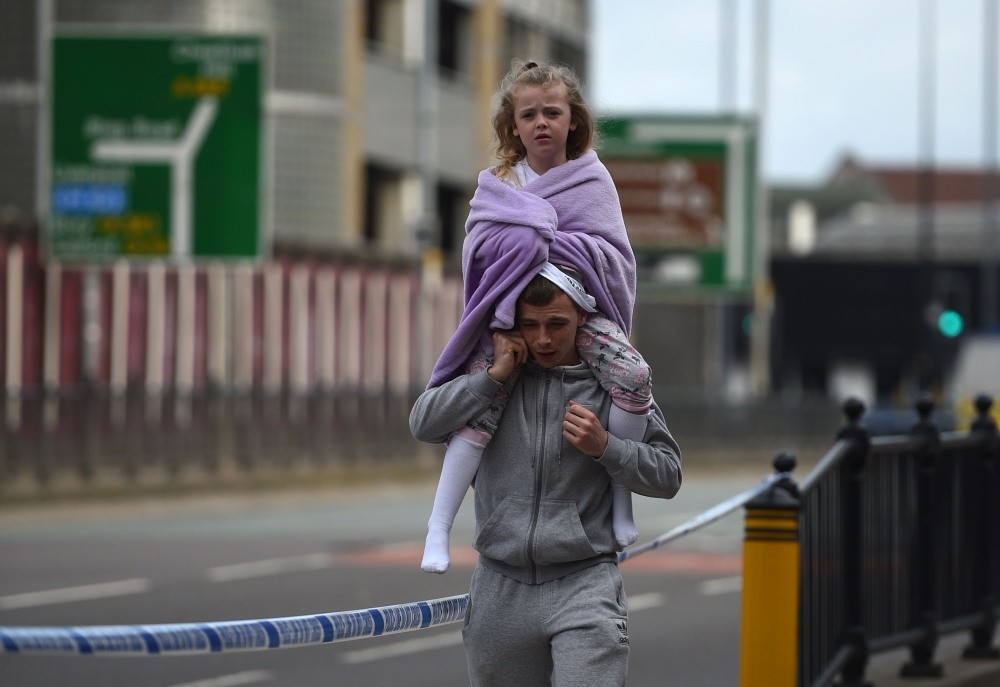 A man carrying a young girl on his shoulders near the Victoria station in Manchester following the deadly terror attack at the Ariana Grande concert on May 23.
by İlnur Çevik May 24, 2017 12:00 am

The blood thirsty terrorists of Daesh were back in action Monday night, this time targeting a crowd of music lovers in Manchester, England. Once again a cowardly act of terrorism, once again 22 dead and scores wounded. There is deep grief not only in Britain but also in Turkey as well as all over the world.Turkey was fortunate when only three days ago police intelligence caught an Azeri suspect who turned out to be a Daesh terrorist. The information received from the terrorist led police in Ankara to a Daesh hideout, which was raided and two terrorists who were preparing deadly attacks in the capital were killed. Police discovered later that the terrorists were in fact preparing an attack on the crowds attending the ruling Justice and Development Party's (AK Party) extraordinary congress on Sunday and another target in the district of Dikmen. A massacre was averted by the Turkish security forces.

All these show no one anywhere in the world is immune to Daesh terrorism. Previously Daesh has hit Berlin, Moscow, Istanbul, Paris, Brussels, Ankara and London. They have to be stopped but this is impossible when there is such a lack of international cooperation!

People may oppose our statement and say "but there is international cooperation against Daesh, look how a coalition has been set up to bomb Daesh targets in Syria" and we would say in return, "do not kid yourselves, the ineffectiveness of these attacks is so clear and so sad, it is an empty gesture…"

Turkey has proven on the field what can be done against Daesh by launching Operation Euphrates Shield with the help of the Free Syrian Army (FSA) and has cleared its border areas from the threat of these terrorists. It is sad that what Turkey has done has not been properly acknowledged by the international community and especially by the United States.The real international effort should be on speedy intelligence sharing against Daesh yet we see that there is a serious lack of trust among intelligence agencies in the West hindering any effective fight. Some intelligence agencies have this bad habit of sheltering and using terrorist organizations like the PKK and the Gülenist Terror Group (FETÖ) against Turkey. How can anyone expect an effective fight against all terrorist organizations when people talk about "good terrorists and bad terrorists?" Everyone should agree first that there are no "good terrorists" and that all terrorists are bad and should be destroyed.

Besides all this, it is also a fact that Turkey has warned Western intelligence agencies about many terrorists from the Daesh group and has extradited them to various European capitals and yet we have seen one of these terrorists involved in the bloody attack at Brussels Airport.

Besides this, the international community should start accepting the fact that Daesh is not an "Islamic" terrorist organization but a terrorist group that exploits the good name of Islam by preaching rules that are not Islamic and their actions are aimed to bringing our religion in to disrepute.

The attack in Britain will unfortunately once again be used by the racist extremists who oppose migration laws and who fuel Islamophobia just on the eve of parliamentary elections. It is easy to say British politicians should not fall into this trap, but with a tough election in the near horizon, this is easier said than done. We have seen this in the Netherlands and France and we are observing it in Germany.