All parties should put their houses in order 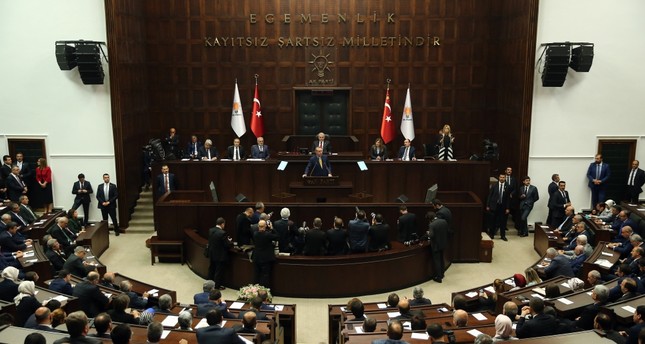 President Recep Tayyip Erdoğan addresses members of the AK Party for the first time as the party head after the constitutional April referendum, Tuesday.

To maintain their presence and reach the masses in the future, all political parties should adapt the new system taking shape after the constitutional referendum

Turkish politics has entered a new era as the president has now emerged as a fully political figure. This became official when President Recep Tayyip Erdoğan returned to the ruling Justice and Development Party (AK Party) as a member on May 2 and was elected as the chairman of the party at an extraordinary convention on May 21.

All this has happened thanks to the constitutional changes that were approved in a national referendum on April 16 that ushered Turkey into a presidential system of government where the president was also allowed to become a member of a political party.

On Tuesday, President Erdoğan addressed his AK Party Parliamentary Group, in a historic occasion. This shows clearly that the president, who will be the head of the executive as of 2019, will be fully in charge of his political party. This is normal as whoever wants to become president in the future has to have political backing if he wants to win the polls and effectively run the country.

The president has told AK Party deputies that the party has to be attentive to the man in the street and satisfy his needs. He said the nation stood by the AK Party on several occasions and sacrificed their lives to uphold democracy to foil the July 15, 2016 coup attempt. "Now we have to pay back the people," he said summarizing what the administration under Erdoğan will do until the 2019 elections.

He said the party organization faces "mental fatigue" and that the party needs rejuvenation. This means a shakeup in the party branches and in the AK Party municipalities.

So this is the picture presently at the AK Party. But then what is happening on the opposition front while the AK Party speaks about putting its house in order?

Unfortunately it seems the opposition remains aloof to the structural changes that the system is undergoing and thus are paralyzed.

The main opposition Republican People's Party (CHP) still has not faced the reality that Turkey's political system is undergoing a massive change and pretends that they can resist this transformation by declaring the April 16 referendum null and void.

They do not understand that this is an irreversible process. The CHP should be acting with speed to adapt to the new system. It has to be a part of the new process or else it will be simply eliminated by the people. The party says it does not recognize the referendum results or the changes that have been put into law; so then the CHP has to make public whether it will participate in the 2019 parliamentary and presidential elections.

The pro-terrorist PKK-supporting Peoples' Democratic Party (HDP) has to sever its ties with the terrorist organization and face the reality that Turkey is in a process of transformation and adapt to the changes.

The conservative Nationalist Movement Party (MHP), which lived through turbulent times as Fetullah Gülen and terrorists tried to take over the party, also has to put its house in order. The party supported the constitutional changes and has to be a strong voice for the nationalist masses in Turkey.

However, besides the AK Party, none of these parties are really making an effort, thus leaving the field wide open for President Erdoğan and his party.