Why not in the U.S.A., President Trump? 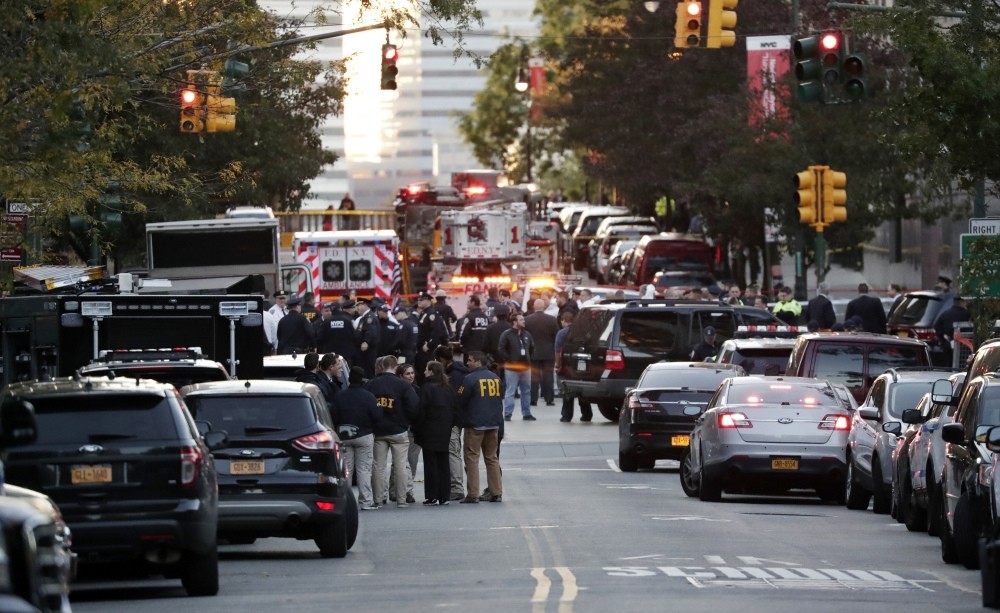 FBI and New York City EMTs at the scene of the terrorist attack by a man who reportedly drove a pickup truck along a bike lane in downtown New York City, killing 8 people, Oct. 31.
by İlnur Çevik Nov 02, 2017 12:00 am

A terrorist attack in the heart of New York has rocked the United States and has once again shown no one on this globe is safe from such attacks, especially when so many states are paying lip service to those who want to spread violence around the world.

Some call it the Islamic State of Iraq and Syria (ISIS) just to equate Islam with terrorism and defame Muslims while others call it Daesh, which is the Arabic acronym for the group. What is sad is that Daesh is the creation of Western minds to be used to bring Islam into disrepute and has been used by Western intelligence agencies.

Yet, just like the Taliban monster they created in Afghanistan, and later turned on them, Daesh has unleashed its terrorist activities around the world in London, New York and elsewhere.

The terrorist organization carved out chunks of Iraq and Syria beginning in 2014, but has now been beaten militarily and is losing ground or it is being disbanded so that a bulk of its fighters who are not Arab have started returning to their homelands or other countries in Europe and America to continue their violence against the people of these countries.

Eight people were killed and almost a dozen others injured when a man in a rented flatbed pickup drove down a busy bicycle path Tuesday near the World Trade Center in Manhattan, the heart of New York City. The 29-year-old suspect was identified as Sayfullo Habibullaevic Saipov. He is from the Central Asian republic of Uzbekistan and came to the United States in 2010.

The fact that an Uzbek citizen was involved in the attack reminds us of the Daesh terrorist attack in Istanbul in which an Uzbek gunman shot up a nightclub in the early hours of 2017, killing 39 people and wounding scores more. Since then, a police crackdown on Daesh has netted dozens of terrorists in Turkey and has prevented several probable attacks, the last being three days ago when police foiled a plot by four Daesh militants in Istanbul.President Donald Trump responding to the attack with a tweet: "In NYC, looks like another attack by a very sick and deranged person. Law enforcement is following this closely. NOT IN THE U.S.A.!"

One has to ask why not in the USA Mr. President?

The U.S. has been arming terrorists for several decades. Most of the time the arms provided to them have turned against the U.S. Yet U.S. administrations never learn.

You have been arming the PKK terrorists in Syria calling them different names to provide a sugar coating and you have been using them to fight other terrorists, namely Daesh. You dislodged Daesh from the Syrian city of Raqqa, which the terrorists were claiming as their capital. Yet it was an easy operation as your men did not finish off Daesh there, but made a deal with them to provide safe passage, and thus the Syrian city was retaken with minimum effort. Incidentally, the PKK affiliate there let you down when they put up a huge banner of Abdullah Öcalan in the heart of Raqqa and celebrated their victory, showing their leader is a terrorist and they are actually members of the PKK and not the rubbish called the Democratic Syrian Forces (SDF).

How can you effectively fight Daesh when you pay lip service to them? How can you expect an effective fight against global terrorism when you treat some terrorists as your own fighting force for convenience? You simply invite trouble, and in the end the guns turn against you. So, why not in the USA Mr. President?