Who will apologize to the Syrians? 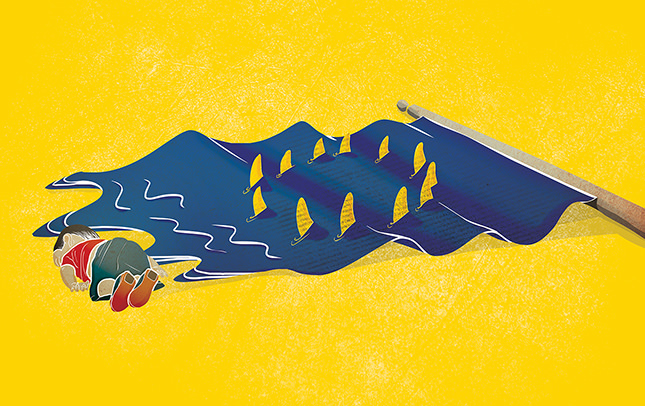 The picture of the drowned Syrian child has become a symbol of the apathy, negligence and sinfulness of European countries in the face of the Syrian civil war

At the center of Peace Park in Hiroshima there is a monument erected to commemorate the child victims of World War II. The structure memorializes, in particular, Sadako Sasaki, a victim of the atomic bombing of Hiroshima. Sasaki was only two years old when the bombing took place - the same age as Aylan Kurdi. A few years later she started to develop cancer because of the radioactive fallout that she was exposed to and died as result of what at that time many called "atom bomb disease." Sasaki was one of the millions of child victims of World War II. Later the atomic bomb and Hiroshima were mostly remembered by this little victim of it.

Nazım Hikmet, a prominent poet from Turkey, wrote a poem to remember her and the other child victims:

"All that I need is that for peace / You fight today you fight today / So that the children of this world / Can live and grow and laugh and play."

However, this did not stop the atrocities that children face in different parts of the world. Children continued to be the most vulnerable victims of wars and conflicts around the world. A few decades after Hiroshima, in a deadly conflict in Vietnam, another little girl became the face of the pain and suffering of little bodies in conflict. One of the most memorable photos of the Vietnam War was the picture of Phan Thi Kim Phuc, who was seriously wounded by a napalm bomb when a photo was taken of her running and crying. The photograph later became a symbol for the anti-war movement around the world.

Since then, the world has witnessed various atrocities. We saw the most effective killing machines of recent history in action in Rwanda, and while there were many signs and evidence of genocide, the international community and major powers preferred to look the other way. A similar ethnic cleansing took place in Bosnia, and up until the coverage of the market place bombing on live TV, again many preferred to look the other way and ignored the humanitarian disaster and genocide. These conflicts were called "problems from hell" and avoiding them was considered bliss.

There were always similar forms of ceremonial commemoration following these atrocities. After the deaths of hundreds of thousands there are usually overdue apologies by those nations that did not do enough to stop these crimes. "Never again" became a phrase that speechwriters for leaders of these nations used most frequently in anniversary speeches. Everybody pretends to understand the heinousness of these crimes and the unacceptability of tolerating them. However, every time history repeats itself. In the last few decades, again and again the silence of the international community and their disinterest in these crimes and atrocities emboldens dictators around the world. As these dictators became more arrogant and daring, more children died in wars and conflicts.

In the last two weeks, two pictures about the Syrian conflict have generated international outrage. The picture of a Syrian refugee father selling pens, while carrying his sleeping daughter resulted in a major campaign for him in social media and demonstrated the plight of these refugees in different countries. A second and more shocking image was the photo of a drowned toddler on a beach. It was the child of one of the millions of Syrian refugees who try to flee from the conflict in Syria. The picture was on the front page of major news outlets, and in social media the name of the drowned kid became a trend topic. It was one of the saddest moments of the conflict in Syria for outsiders, but it was nothing new for Syrians.

For the last four years, hundreds of thousands of Syrians have died from heavy bombing, diseases in camps or drowning in the Mediterranean Sea while trying to save themselves and find a safer place to live. Two years ago, when the regime used chemical weapons in Ghouta, dozens of children died from sarin gas. The videos of crying and mourning parents next to their little babies and kids were available on social media. However, for the last four years, the major powers have basically tried to avoid seeing this conflict and images of dying kids.

The regime's chemical weapons attack on civilians and the reaction of the international community was actually a demonstration of the position of some Western powers about Syrian civilian victims. The regime did not receive any sanctions other than having to give up its chemical weapon stockpile. In fact, the attack and its aftermath turned the red line of the international community into a green light for the Assad regime to kill civilians in Syria with conventional weapons. The lack of any punitive actions against the perpetrators of this crime demonstrated the lack of willingness to help Syrian civilians. Significantly, chemical weapons were eliminated in the country so that they could not get into the hands of radical groups and be used against Western nations.

This was not the only threat that the Syrian conflict generated. A year after the use of chemical weapons, terrorist organizations emerged that attracted international attention. Once more, the international community realized the danger that Syrians were facing from groups like ISIS. However, one more time the international community was more concerned about the threat that ISIS posed to international security than to Syrians. The main focus was on foreign fighters and aerial bombings instead of eliminating conditions that facilitate the emergence and rise of organizations such as ISIS. During this period, the Syrians, on the one hand, had to fight against the Assad regime, which was given a green light by the international community to kill civilians via conventional weapons; on the other hand, they had to face the danger that ISIS posed for Syria and all opposition groups. While they were trying to escape from both the bombs of Assad's air power and the atrocities of ISIS, they found that the doors of the Western powers are closed to them. Many European nations shut their doors to refugees and watched as thousands drowned in the Mediterranean Sea. They neither helped refugees nor tried to find a solution to the conflict in Syria.

This is the story behind the picture of a drowned toddler on the shores of the Aegean Sea. It was not an accident. It was a crime with many accomplices that will be a dark stain on the history of the 2010s. Everybody will remember this picture, and years from now everybody will discuss those responsible for this tragedy. Instead of the Greek debt crisis, the EU's foreign policy in the 2010s may be remembered for this picture alone. Maybe, rather than the Iran nuclear deal, this picture will be one of the most consequential moments for the Obama administration's foreign policy. Everybody will remember this single picture. This picture will tell the story of the atrocities of the Assad regime and the major powers that sold weapons to this regime and those countries that provided military assistance to Assad. It will be another "never again" moment for Western nations. After the end of the conflict, there will be huge commemorations, and the speechwriters of the leaders of those nations that did not do enough to stop it will make emotional statements. Maybe this incident will be another chapter in U.S. Ambassador to the U.N. Samantha Power's book on "A problem from Hell." After the death of hundreds of thousands of people, the conflict in Syria has already become a dark stain on the history of these years; but with this picture, it has become a symbol as well: One single picture that can tell the whole story of all the suffering, all the negligence, all the hypocrisy and all the shame. One picture alone will provide the testimony, the evidence and the witness.