Russia in Syria: Any relation with Ukraine and Iran? 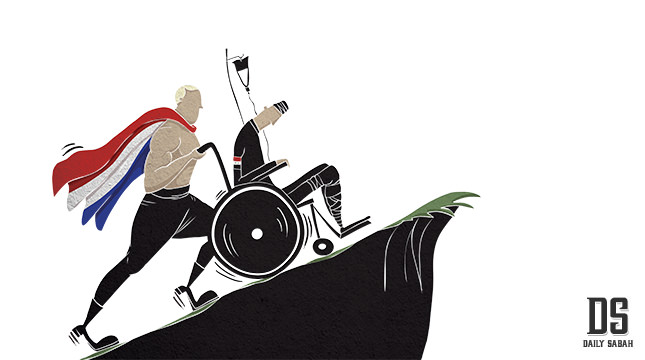 With the West's silence over the terror of the Assad regime and now the Russian government's military support to Syria, the atmosphere is perfect for everything to go as Assad wishes

This column is the third in a series on the recent Russian military assistance and buildup in Syria. Although some have downplayed the significance of it and argued that it is the delivery of the previously bought weapon systems, this development can be a game changer in the politics of the region and the state of the conflict in Syria. As such, it will be necessary to discuss this issue one more time in this column. This time, instead of discussing possible Russian motivations and the dangers that a Russian military buildup presents to regional security, I will focus on the possible variables and actors to which we need to pay attention in order to understand why Russia sending is troops to Syria.

Before analyzing these variables, it is important to understand that since the publication of my piece three days ago there have been further developments and intelligence reports about Russian military presence in Syria. Intelligence sources in the U.S. told Fox News: "In addition to the previously reported arrival of nearly 50 Russian marines, 100 housing units and armored vehicles delivered by a stream of massive Antonov-124 Condor military transport aircraft and two Russian landing ships in Syria - the Russians have delivered aviation, intelligence and communications facilities to deploy a powerful offensive force." In addition to that, two Western officials and a Russian source told Reuters that Syria is also receiving anti-aircraft missiles from Russia in this latest batch of military support. According to the report, "Moscow is sending advanced SA-22 anti-aircraft missiles to Syria. The system would be operated by Russian troops, rather than Syrians." However, despite these reports it seems that the U.S. administration is still not clear about Russia's motivation in Syria and how to respond to the developments on the ground. U.S. President Barack Obama also commented on this issue and called it "a strategy that's doomed to failure." Despite Obama's clear message to Russia, Josh Rogin of Bloomberg reported that the administration is not very clear on how to respond to Russia's policy in Syria. According to him, there are serious disagreements within the administration because of the different options offered and "the options are to try to confront Russia inside Syria, or as some in the White House are advocating, cooperate with Russia there on the fight against the Islamic State [of Iraq and al-Sham, ISIS]." The administration is one more time demonstrating its indecisiveness on this very significant issue despite Obama's statements.

These reports clarify certain issues about Russian military assistance to the Syrian regime, but provide further ambiguity about Russian President Vladimir Putin's motivation in this latest policy endeavor. As the Western military and intelligence officials one by one discover the details of the military assistance, it is increasingly becoming clear that the initial Russian statements about counterterrorism as the main goal do not explain the real reason behind this new development. Especially the presence of anti-aircraft missiles refutes this story line since the Islamic State of Iraq and al-Sham (ISIS) or other terrorist forces do not have any air force. In addition, these details also challenge statements from some other Russian officials who describe the developments as part of routine defense industry contracts. In terms of its size and the number of Russian officers involved, this is not a usual transaction, but a part of a more comprehensive military assistance to Bashar Assad's regime.

While focusing on these developments between Syria and Russia, it may be more meaningful to also focus on Russian relations with two other countries. In addition to the very frequently stated motivation of distracting public attention from economic problems and rallying the populace with Russian nationalism by claiming it has a great power status in world politics, the Russian motivation in Syria may also be related to diplomacy in Ukraine and Russian relations with Iran.

There are important diplomatic meetings taking place regarding the crisis in Ukraine. The latest meetings in Berlin proved to be positive and "less confrontational" according to the participants. Reports say progress has been made on some contentious issues and "the warring sides are now very close to an agreement on withdrawing heavy weapons from the frontline. Also, for the first time Putin has changed his tone on the conflict in Ukraine and welcomed the cease-fire in eastern Ukraine. This is a significant development in a crisis that brought the West and Russia to the brink of a major confrontation. The meetings demonstrated that Russia is becoming more conciliatory in its tone and rhetoric about the crisis in Ukraine. In fact, while militarizing its policy in Syria, Russia seems to be changing its discourse and policy on the Ukrainian crisis. A report by Michael Weiss and Ben Nimma last week argued that the Russian troops that were dispatched to Syria in recent days were actually the units that played a critical role in Russia's invasion of Crimea. If this information is correct considering the recent diplomatic developments on the Ukrainian front, Moscow is trying to accomplish several things by sending troops to Syria. Internationally it is signaling a shift in its policy toward Western countries by taking positive steps in the main area of confrontation. It is also trying to present itself with its military buildup in Syria as a partner to the international coalition against ISIS through its discourse on the war on terrorism. This situation will also give a chance for Russia to present itself as a game changer in a major conflict in the world. Domestically, Russia may be trying to move its troops in Crimea to Syria to continue its rally-round-the-flag strategy. It is frequently mentioned that Moscow has been fueling a significant level of nationalism in Russian society during the Ukrainian crisis. Putin's approval ratings reached to record numbers because of the nationalist fervor, according to the Moscow-based Levada Center, it was 89 percent last June. One of the aspects to these high numbers is related to the perception of threats in the country and Putin's tactical use of military power. However, nationalism is usually easy to mobilize but, can be very hard to demobilize or halt. Considering this, Russia may be preparing another military adventure to keep nationalism high in the country before it takes a significant step in Ukraine. In this sense, the Kremlin may be planning to compensate taking a step back in Ukraine with a move forward in Syria. The support for Assad may not create the same public support that Putin enjoyed in Ukraine because Russian authorities' use of the fight against terrorism may be more pronounced and used for propaganda in the process.A second variable to Russian military involvement in and support to Syria may be related to its relations with Iran. Reportedly, in late July Gen. Qasem Suleimani, the commander of Iran's Quds Force and Iran's point man in Syria visited Moscow and met with Russian officials, including Putin. That the Russian military presence started to increase rapidly after this meeting has caused speculation about a possible agreement between Russia and Iran on Syria. In the days following these developments the Israeli press quoted Israeli security officials on the increasing flow of Iranian ground troops to Syria following Suleimani's meeting in Moscow. In addition, Fox News last week quoted a U.S. intelligence official saying that the Russians are now co-leading the war in Syria. Of course these are speculations at this point, but the fact that these developments are taking place in the aftermath of the nuclear deal between Iran and the P5+1 signals that Russia may deepen its ties with Iran in this new political atmosphere by increasing its cooperation and coordination in Syria.

These two variables need to be taken into consideration in order to understand Russia's motivation in this new policy. Due to the lack of clarity and purpose in Russia's actions, we will continue to talk about this subject in the coming weeks and months. There is, however, significant clarity in one outcome of Russia's actions. It is that this new Russian military support will provide significant relief for Assad, though the cost he has to pay is uncertain now.