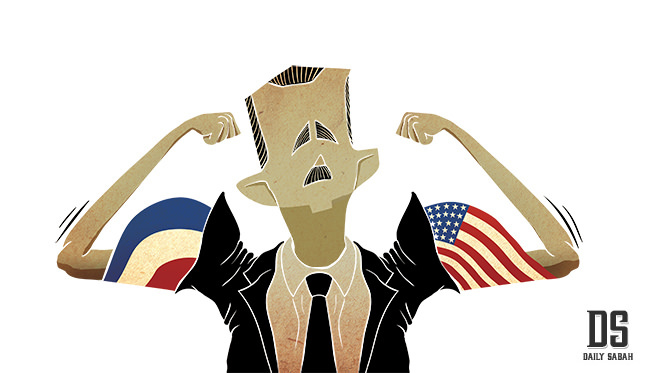 Foes in the Ukrainian crisis, allies in the Iran Nuclear Deal and Syrian conflict: The relations between the U.S. and Russia are the greatest symbols of the paradigm-realism allowing states to look at the world with an ego

It was a little more than three years ago at the Democratic National Convention when the current secretary of state, who was then the chairman of the Senate Committee on Foreign Relations, Senator John Kerry mocked the Republican nominee Mitt Romney for his statement on Russia. Romney called Russia the most significant geopolitical foe of the United States, which at that time raised harsh criticism by many foreign policy experts. Kerry in his speech said, "Mitt Romney talks like he's only seen Russia by watching `Rocky IV`." Later in the presidential debate between the candidates, President Obama one more time brought up this issue to challenge the foreign policy credentials of his opponent. President Obama at that debate said: "Gov. Romney, I'm glad that you recognize that al-Qaeda is a threat because a few months ago when you were asked what's the biggest geopolitical threat facing America, you said Russia, not al-Qaeda. You said Russia ... the 1980s, they're now calling to ask for their foreign policy back because, you know, the Cold War's been over for 20 years." Of course this offense about Romney's statement on Russia came after sharp criticisms by the Republicans to the "reset" policy of President Obama toward Russia, which aimed to newly modify the relationship between the U.S. with Russia. The decision to stop the missile defense shield over Eastern Europe and the causal "buddy" moments with then President Medvedev were all parts of this reset policy. While critics were questioning the success of this new policy, President Obama was caught in a hot mic moment with President Medvedev in a summit, asking him to give him some time and saying that he would be more flexible after the elections. The partisan line became more obvious after this incident, as the Republicans increased their criticism of U.S. policy towards Russia.

A JEKYL AND HYDE

However, while President Obama was criticizing the Republican approach on Russia, he himself increasingly became restless about the policies of the Russian government. Weeks after his re-election, President Obama signed the Magnitsky Act that brought sanctions on human rights abusers in Russia, and with the constant reports about Russian military activity the situation got tense between the two countries. The analogies of the Cold War started to be made again with the Snowden Affair. The Russian decision to provide asylum for Edward Snowden resulted in one of the most difficult moments in bilateral relations during the Obama administration. A summit between Obama and Putin was cancelled in the aftermath of this decision.

While relations between two countries were going through one of the most significant crises, they found a working relationship in Syria. In the aftermath of chemical weapon use by the Assad regime, Secretary Kerry showed a way out for Assad, which was instrumentalized by the Russian government to rescue a military operation against Assad. The plan to remove the chemical weapons and eliminate them provided an excellent opportunity for the Obama administration to avoid a military intervention.

However, this partnership of convenience in Syria was interrupted by developments in Ukraine. U.S. sanctions after the crackdown in Kiev and the Russian annexation of Crimea and the civil war in Eastern Ukraine, caused more tension in bilateral relations. In several instances during these crises, Putin reminded the world that Russia is a nuclear power.

However, sanctions continued to increase, and with the dramatic decline in oil prices, the Russian economy experienced one of its hardest periods.

In the midst of these crises, the international community witnessed another significant development between the U.S. and Russia again in Syria. In the midst of the Cold War-like crises between the two countries, Russia and the U.S. worked in relative harmony on two significant issues in the Middle East. First of all, as part of the P5+1 negotiations concerning the Iranian nuclear program, the two countries demonstrated "relative" ease during these meetings. In addition to that, the two countries also reportedly started sharing intelligence in the fight against the Islamic State of Iraq and al-Sham (ISIS). In fact, while having a major crisis about Ukraine, the two countries continue to cooperate on other issues in the Middle East.

Earlier this year in May, Secretary Kerry met with President Putin in Sochi and discussed issues, including Syria and Ukraine. The New York Times reported that the primary agenda in the meeting was Syria. Accordingly, the meeting was arranged to see "whether it is possible for the two sides to work together on a political solution for the conflict in Syria." The paper also reported, "The meeting, which will be held on Tuesday in the Black Sea city of Sochi, represents a new attempt by the Obama administration to pursue a political solution to Syria after years of frustrated diplomacy and deepening violence there." A few days after this meeting in Sochi, U.S. Special Envoy for Syria Daniel Rubinstein traveled to Moscow. According to the media note, "The special envoy discussed with Deputy Foreign Minister Bogdanov and other senior Foreign Ministry officials how to create the conditions for a genuine, sustainable political transition in Syria that is consistent with the Geneva Communique." During the same days, Assistant Secretary of State for European and Eurasian Affairs, Victoria Nuland, also visited Moscow. According to some analysts the main issue on the agenda was not Ukraine but Syria during her visit as well.

The meetings and summits between the foreign policy makers of these two countries increased in the summer months in regards to the crisis in Syria. In August in a report about diplomatic initiatives concerning the Syrian conflict, The New York Times reported: "Senior American officials say Russian officials have appeared to be more open in recent weeks to discussions about replacing Mr. Assad. These officials, who spoke on condition of anonymity to discuss diplomatic deliberations, say Moscow is increasingly worried about Mr. Assad's precarious position and the rise of extremist groups, which have recruited several thousand Russian citizens to fight in Syria." However, only two weeks after this report, this time it started to be reported that Russia launched a major military buildup in Syria. The early reports were first denied by the Russian president but after the increasing amount of evidence, it was revealed that the Russian government sent personnel and equipment to Syria on the pretext of fighting against ISIS. The U.S. reaction to this development was more confusing than the Russian motivations in Syria. On the one hand, there was an increasing degree of concern by U.S. policy makers about the Russian military buildup and its activity, especially after the initial bombings of Russian jets in part on some U.S.-vetted anti-Assad forces. On the other hand, the tone of the administration also sounded less concerned about Russian military involvement in Syria and Assad's increasing strength but more worried about a potential escalation in the region as a result of misunderstandings or misperceptions. So far, statements from the Obama administration have had mixed messages. Everybody is trying to understand the motivation of Russia and the nature of the relationship between the U.S. and Russia. Is it a cold war or a partnership of convenience against ISIS? None of them is clear and both of them confuse many observers and analysts focusing on the region.