Another wakeup call for the world to fight against terrorism 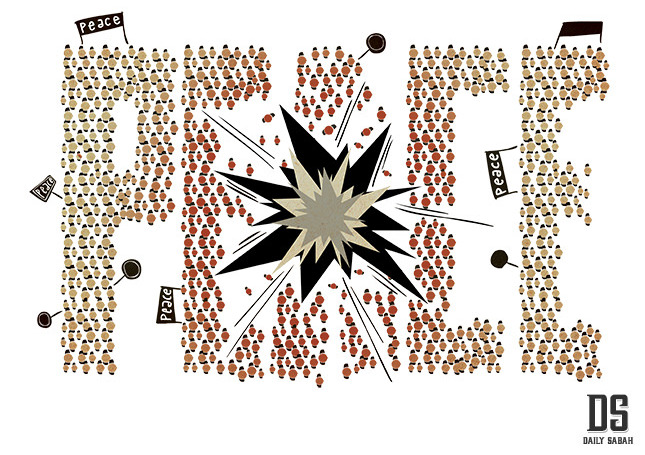 The grievous fact that hundreds of people were brutally killed and wounded by the latest suicide bombings in Ankara renders all strategies, political analyses and comments meaningless

On Saturday, the biggest terrorist attack in the history of the Republic of Turkey took place in Ankara during a rally attended by several civil society organizations and supporters of the Peoples' Democratic Party (HDP). By Saturday night, the official number of deaths reached 95 with 246 wounded, some of them in critical condition. According to the first reports, two suicide bombers blew themselves up in the middle of the crowd in front of the Ankara train station, while those who traveled from different parts of Turkey to Ankara to participate in the rally were preparing to join the main crowd a few kilometers away in Sıhhiye. So far, no terrorist organization has claimed responsibility for the attack. However, it has a similar pattern to the suicide bombing in Suruç in July, which killed more than 30 young people preparing to go to Kobani to help with the reconstruction of the war-torn town.

One more time, the place and timing of the attack was chosen strategically. The attack took place not at the rally ground, which security forces had prepared for possible security problems, but in front of the train station where those coming to the rally were about to complete their preparations. In Suruç as well as Ankara, the bombers intended to mix in with the crowd on the ground and blow themselves up when cameras were taking footage of the demonstration. In both instances, the bombers intended to increase the number of casualties, and with videos capturing the explosions, instill the most amount of fear in people.

The terrorist attack that took place on Saturday was part of a series of terrorist attacks against Turkish military and civilian targets that have gone on over the last two years, but especially intensified in the last six months. The bombing of the HDP rally in Diyarbakır and the Suruç bombing by the Islamic State of Iraq and al-Sham (ISIS) and the following PKK attacks on security forces, which have left more than 150 people dead, has shown the increasing targeting of Turkey by terrorist groups that found safe havens in uncontrollable parts of the region and that improved their capacities as a result of the civil wars in these countries.

ISIS gained a significant amount of ground with the increasing length of the war in Syria and increased its recruitment operations around the world. It made suicide missions an important part of its fighting strategy. The videos of these suicide attacks were distributed on social media, and through these attacks, they demonstrated how the organization can be flexible in its methodology of fighting, navigating as a regular army, an insurgency or a terrorist group, depending on the context of the constraints and limitations. A few months ago, after ending their siege of the town, ISIS members disguised as Kurdish fighters attacked Kobani with suicide bombers, demonstrating this flexibility and their success in achieving tactical operations: terrorizing people and generating an atmosphere of insecurity. What gave them this success was, in part, the continuation of the war in Syria.

In a similar vein, when the PKK ended the cease-fire in July and started its attacks on security forces in Turkey, it also demonstrated that the organization had gone through a significant degree of mutation as a result of the relative freedom of movement it enjoyed in these countries in civil war. PKK members launched attacks on Turkish security forces, started to kill security personnel in their homes and followed some after they left their barracks. The organization also organized large-scale suicide bombing operations, such as the one in Ağrı in which members of the group attacked a gendarmerie headquarters in Doğubeyazıt with a truck full of explosives, which left two soldiers dead and 31 wounded. Finally, the deadliest PKK attacks in the last two months took place as a result of a tactic they excel at as a result of the war in Iraq. Both in Dağlıca, in which 16 soldiers were killed, and in Iğdır, in which 13 police officers were killed, the PKK used improvised explosive devices (IEDs), which were frequently used against U.S. soldiers in Iraq.

The changes and improvement in attacks by terrorist organizations demonstrate that in terms of tactical improvement, regardless of their ideological or political differences, terrorist organizations learn from each other and develop their capabilities through copying and mimicking. They have a steep learning curve when it comes to operational efficiency, and the tactics they use have a high spillover effect onto other terrorist organizations. These tactical changes also demonstrate that regardless of their ideological or political differences, the biggest advantage terrorist organizations have are failed states and uncontrolled areas, which have become venues for the export of insecurity to the region and to international security. Thus the intensification of the impact of terrorist attacks on Turkey should be a wakeup call for all countries around the world. The continuation and deepening of the crisis in Syria and the enlarging of uncontrolled areas in the country necessitate active cooperation in the world to find a workable solution to the problems in the country.

Secondly, these attacks in Turkey and improvement in the capacities and capabilities of terrorist organizations demonstrate that there should be active cooperation in the international arena against terrorism. Considering the global nature of terrorism, the fight against terrorism also necessitates global precautions and efforts. Most terrorist groups considered threats by different countries are transnational in nature and necessitate operations, coordination and cooperation in a way that would involve the actions of more than one state. In fact, the reaction to terrorist attacks need to go beyond the expression of condolences, as meaningful workable relationships need to be generated between countries to deal with the threat of terrorism. In its fight against terrorism, Turkey needs support from other countries and international organizations. In particular, the coordination of intelligence agencies seems to be key to dealing with such actions in the future.

Thirdly, the terrorist attacks by both ISIS and the PKK in the last few months in Turkey have demonstrated that the real aim is, in part, to spread ethnic and sectarian conflict from the greater region to Turkey. So far, Turkish citizens have demonstrated maturity in the face of these terrorist attacks. Despite some unwanted incidents targeting Kurdish citizens in some cities after PKK attacks, the incidents did not lead to ongoing communal violence. Again, despite the Oct. 6-7 events in which pro-PKK groups attacked other Kurdish citizens and businesses, which resulted in looting and more than 42 people dead, Kurdish citizens in the southeast demonstrated relative calm and did not retaliate despite provocations. All of the citizens of Turkey realized the danger of such communal violence that has been taking place on the other side of the border. In this sense, political personalities need to be extremely responsible in their statements and reactions to terrorist actions. To try to mobilize people against the state after a terrorist attack in the capital of the country that took the lives of almost 100 people may result in serious consequences that they cannot contain. Of course, as several leaders of the Justice and Development (AK Party) and Prime Minister Ahmet Davutoğlu expressed in press conferences, if there is anyone who failed to do their part to prevent the attack, they should be accountable for their failures as well.

In fact, the attack in Ankara needs to be considered as another wakeup call for the international community to find a solution to the problem of insecurity- and violence-exporting regions, and to coordinate and cooperate in the fight against terrorism. It is also a wakeup call for Turkey's citizens to be more aware of the main goals of terrorists to generate a civil war in Turkey, for the politicians to be more responsible in their statements and reactions and for the state to find those responsible for these attacks as soon as possible.