Fight against DAESH after 16 months 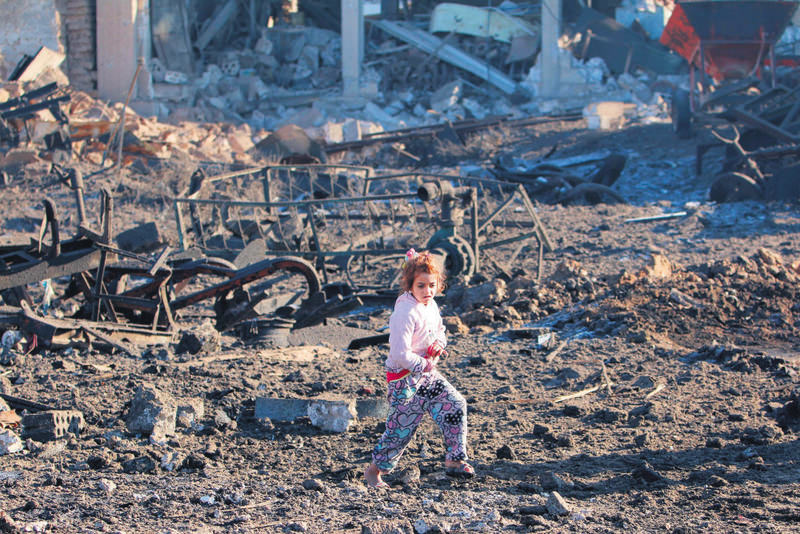 A girl walking over debris at a site hit by one of DAESH's triple truck bombs in the YPG-controlled town of Tel Tamer, Syria.
by Kılıç Buğra Kanat Dec 14, 2015 12:00 am

The U.S.'s failed strategy to fight DAESH, which shares outrageous similarities with al-Qaeda, despite the differences between those times and today, showing the state is taking no lesson from former experiences

Almost 16 months ago, after a series of statements that resulted in serious criticisms from both Middle East experts and the public in the United States, President Barack Obama announced that the U.S. and the international coalition had developed a strategy to defeat DAESH. The strategy was compiled of multiple layers and steps, with its final goal being to "degrade" and "destroy" DAESH. Since the declaration of this strategy and its implementation, there has been a range of criticism from political analysts. More than one year after the strategy was put into action, the world has started realizing the validity of these critical voices. Given the current situation, the strategy has not brought the U.S. success.

DAESH is a mutation of al-Qaida in Iraq - the terrorist group which impeded U.S. efforts to stabilize Iraq after the war in 2003. Despite its lengthy experience fighting against the group, the U.S. has not successfully applied the lessons learned from battling al-Qaida to the current situation with DAESH.

Yes, there are key differences between the two terrorist groups in terms of conditions on the ground; however, the current strategy would benefit greatly from the lessons learned from fighting al-Qaida. In short, the U.S. could prevent some problems with DAESH before they manifest themselves, if they applied the lessons learned from neutralizing the Iraqi insurgency.

First of all, almost every Middle East pundit previously considered the formation of an inclusive government in Baghdad as imperative to ward off terrorist groups such as DAESH. Experts thought this would create equal representation for all the different sects and ethnic groups in Iraq. It would also achieve an important dimension of the military operation against DAESH on the ground. The previous fight against al-Qaida in Iraq demonstrated that it is almost impossible to fight against such organizations without getting the support of the Sunnis in the country. To expect the government in Baghdad to achieve such a result with the support of the Shia militia is inherently problematical. And, at this point, there is a huge trust issue between the Sunni tribes and the U.S. and an even bigger problem between the Sunnis in Iraq and Baghdad's government. Without the resolution of this trust issue it would be hard to expect the current strategy to achieve any meaningful results. The second aspect of an inclusive government has to do with the problem in Syria. In the current situation, it is not surprising to see terrorist organizations emerging in Syria - notably, DAESH. Instead of an inclusive and representative government, we have a repressive regime in Damascus which controls less than 20 percent of the territory of Syria despite all the assistance from Russia and Iran. Russian airstrikes and Syrian President Bashar Assad's regime forces targeting of civilians in the last few weeks have once more demonstrated the direness of the situation.

More significantly, it seems unrealistic at this point to expect an international coalition to destroy DAESH with these airstrikes. So far, despite the losses suffered by DAESH, particularly the significant losses faced by its leadership, the terrorist organization seems to be resisting the airstrikes. Of course, some of the strategies adopted by the U.S. in Iraq would be hard to repeat against DAESH. Achieving success in the fight against al-Qaida in Iraq was only possible after terrorist operations were contained and the counter-insurgency operations were strictly adhered to in the face of conflict. However, the current strategy does not provide any road map for how to contain DAESH in Iraq or Syria. Even members of the administration have significantly differing opinions on the level of containment that was achieved within the last 16 months. So far, DAESH has demonstrated a more adept and adaptive strategy as it battles the international coalition.

Another significant dimension of the fight against al-Qaida was the cooperation of intelligence sources and halting the flow of foreign fighters in "source countries" before they reach one of the neighbors of Iraq, most prominently Syria. Today, DAESH boasts a significant recruitment mechanism with its global outreach capabilities in different regions of the world. In both quantitative and qualitative terms, this is way different than the recruitment process we saw with al-Qaida. However, the process of stopping foreign fighters while they are still in their home countries can play an important role in the containment of the threat. This would necessitate a high degree of intelligence cooperation among the international community. Without greater cooperation and coordination it will be hard to stop the flow of foreign fighters and recruitment mechanisms of DAESH.