Questions about the Geneva process 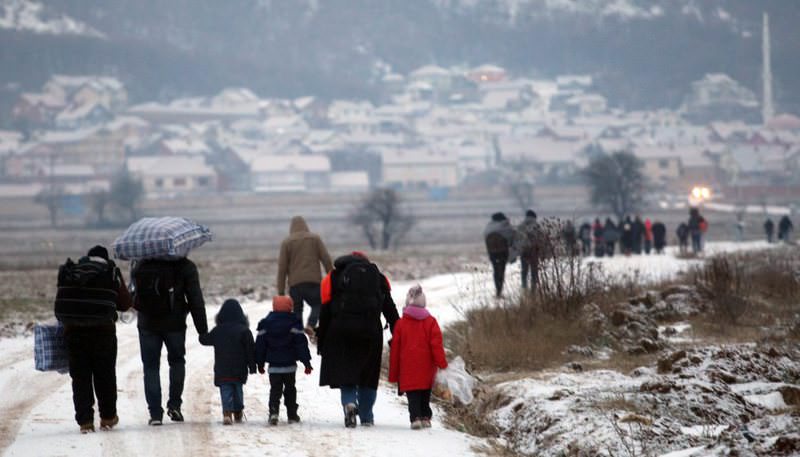 A group of Syrian refugees walking in very cold weather from Macedonia to a camp for the temporary acceptance of refugees in the village Miratovac, on the border between Serbia and Macedonia.
by Kılıç Buğra Kanat Feb 01, 2016 12:00 am

The latest talks in Geneva to find a solution to the Syrian civil war will unlikely be any more successful than those that have preceded it, as those involved either waffle over their commitment to find a resolution or are in no position to agree on anything

The Syrian civil war is about to enter its fifth year, and the cost of the conflict in the region has increased consistently since the beginning of the use of force by the regime of Syrian President Bashar Assad against the demonstrators almost five years ago. For five years now, there have been different international conferences that hoped to bring a change to the situation. So far, however, all of them have failed. The unwillingness of the U.S. to act and the lack of interest and action on the part of the EU for the last five years have paved the way for other powers to fill the vacuum. In the meantime, the country turned into a magnet for terrorist groups such as DAESH. Since the emergence of DAESH and in Iraq and Syria, the international community for the first time attempted to take action in Syria, but the new strategy aimed to "degrade and destroy" DAESH, ignoring any plan to rectify the overall situation there. Since then, the situation in Syria has gotten more complicated with Russia's involvement in the conflict fighting against opposition forces.

In recent weeks, under the sponsorship of U.N. special envoy to Syria, Staffan de Mistura, there is a renewed attempt to resolve problem diplomatically. Although our hopes are for an immediate cease-fire and an end of the conflict, it is hard to be optimistic about the situation, as there is not much incentive for the Syrian government to reach a meaningful agreement with the opposition at this point. First of all, as mentioned above, Russian support for the pro-regime Syrian forces significantly increased their resilience and the tragedy of Syrian civilians. It has been reported that 1,400 Syrian civilians have been killed in Russian airstrikes so far. Although the territorial gains that the regime acquired as a result of the Russian support remained less than expected, in recent days the Russian-Syrian coalition gained some progress, such as the town of Salma. Under these conditions, and with the increasing air and ground support from its allies, it is hard to expect the Syrian regime to engage in any form of dialogue for a lasting peace. Secondly, the fact that U.S. lost much of its deterrent power over the Syrian regime over these last five years makes it harder for the Syrian regime to feel any pressure to reach a deal for a transition to a democratically elected government. It is increasingly becoming clear that the Syrian conflict is a problem from hell for the U.S. administration, and even in the case of the failure of the talks in Geneva there will not be much of a change in the position of the U.S. As it is an election year, and even though U.S. President Barack Obama cannot run for the presidency again, it is not hard to imagine that his administration may be more risk averse than any time before.

During the preparation for the meeting, some reports about the U.S. position regarding the Syrian opposition raised questions about the end goal of the U.S. administration. For instance, Hassan Hassan, in a series of tweets referring to a report by Al-Hayat, said: "Al-Hayat says [U.S. Secretary of State John] Kerry dictated to the opposition 'his understanding with [Russian Foreign Minister Sergey] Lavrov' that they have to go and discuss a "national unity government." According to this report, Kerry also "told the opposition Assad has the right to run & no timetable for his departure." Following this, another tweet from Michael Weiss said: "Initial reports out of the Syria negotiations suggest the U.S. is now acting as a proxy of Russia and Iran, pressuring rebels to give up." Although Kerry denied these allegations a few days later, and said: "The position of the United States is and hasn't changed" the fact that these reports were leaked by some opposition members raised too many questions about the real goal of these meetings. If during the meetings the opposition faces pressure from the United States to adopt such an understanding, a cease-fire and the peace that could be attained on the table might not have much of an effect on the situation in the country.

So if everything was actually going smooth and the proximity talks, which are expected to continue for six months bring a peace agreement, there are too many questions about the implementation of the agreement. Last week, Foreign Policy released a confidential strategy paper about the cease-fire agreement in Syria. According to the report, the de Mistura's "warns that the U.N. would be unable to monitor or enforce any peace deal that might emerge from landmark political talks underway in Geneva." Even if there is a cease-fire among the parties, there is a high risk that this agreement might not be implemented by the U.N. The Foreign Policy said: "The current international and national political context and the current operational environment strongly suggest that a U.N. peacekeeping response relying on international troops or military observers would be an unsuitable modality for ceasefire monitoring," according to the "Draft Ceasefire Modalities Concept Paper" by U.N. envoy to Syria Staffan de Mistura's team. In plain English, that means Syria will be far too dangerous for some time for traditional U.N. peacekeepers to handle." It means that there is a danger that Syrian civilians will constantly face the threat of having a Srebrenica-like situation in the country.

Almost everybody around the world agrees that there should be a solution to the crises in Syria. However, a deal needs to be reached in order to provide meaningful and sustainable peace in the country. The situation so far provides a pessimistic scenario in terms of reaching these goals.