YPG is a master spoiler in Syria 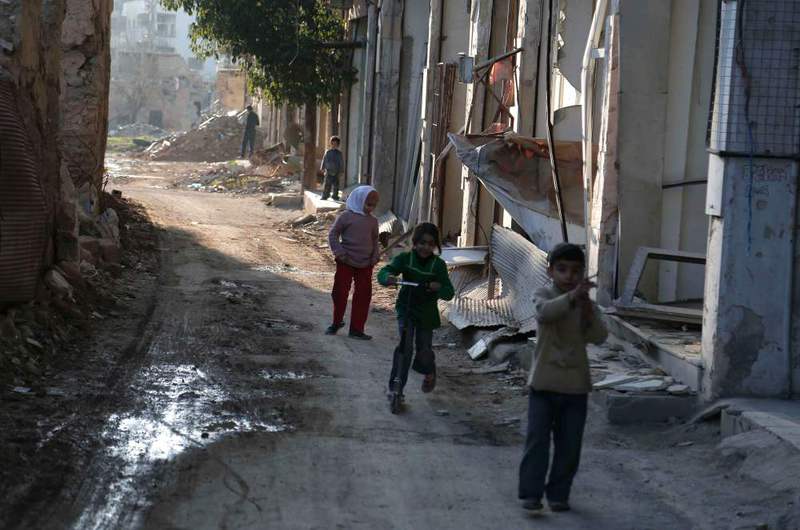 Syrian children playing between buildings destroyed by shelling in the Jobar neighborhood on the eastern outskirts of the capital Damascus, Syria.
by Kılıç Buğra Kanat
Feb 27, 2016 12:00 am

The U.S.'s assumption that Syria's YPG will contribute to the international coalition in the fight against DAESH will put the U.S. into trouble due to the terror organization's separatist strategy in northern Syria and southeastern Turkey

As I mentioned in this column multiple times, the People's Protection Units (YPG) militia and the U.S.'s relation with this organization was considered a possible spoiler in Turkish-U.S. relations by some scholars and observers. What was expected is taking place in a more intense fashion than many had predicted. The first signs of this crisis took place during the Kobani crises in January 2015. When DAESH withdrew its troops from Kobani the U.S. recognized Turkey's role in the fight against DAESH by providing safe refuge for civilians and by allowing passage of Northern Iraqi Kurdistan Regional Government (KRG) peshmerga troops from Turkey. During this period of intense diplomacy and high tensions in bilateral relations, Ankara always raised its concern of a possible expansion of the YPG that would further destabilize the region and generate security risks for Turkey. The reconciliation process was still running at this time and the southeastern cities had experienced relative calm for a significant period. Although the PKK was not pulling its members out of Turkey and the October events and street violence by PKK-affiliated groups raised skepticism about the process, there was optimism and hope that the process would succeed in achieving its goals.

The U.S.'s direct military support for the YPG during the Kobani crisis was not welcomed by Ankara. Providing air support was something, but giving arms in airdrops to an organization that Ankara considers part of the PKK was totally unexpected. For many years since the U.S. invasion of Iraq, in different instances bilateral relations have been impacted because of the PKK. For the U.S. it was never a priority in Iraq and for Turkey it was a significant national security threat. Although Turkey achieved relative calm with the reconciliation process, especially in security, there was deep skepticism about the PKK. And all of a sudden the U.S., Turkey's NATO ally, started to provide direct military support to one of its affiliate groups in Syria.

Despite this shock in Ankara, cautious optimists were expecting this help to be limited to the fight to drive DAESH from Kobani, and after Turkish assistance it was also expected the Democratic Union Party (PYD) would improve relations with Ankara and respect its sensitivities. However, things did not happen that way. The YPG decided to take advantage of the poverty of the international community in Syria and desperate situation of the international coalition against DAESH by fighting against DAESH in order to increase its own power in northern Syria. While trying to achieve that goal, it started to violate human rights and, according to human rights groups, it also began to commit war crimes against Arabs and Turkmens. So U.S. support made the YPG more insensitive to Ankara's demands and more comfortable targeting other local people in northern Syria.

As the YPG increased its expansion, a significant portion of its fighters started to be recruited by the PKK in Turkey. As Ankara one more time raised its concerns about this situation, despite the ideological, organizational and personal links, the U.S. insisted that the YPG is a different organization and should not be considered terrorists. When the PKK suddenly terminated the cease-fire and began attacking Turkish security forces in different parts of Turkey, Ankara's worries proved to be true. Although the U.S. was supportive of Ankara's fight against terrorism in Turkey, it continued to distinguish the YPG as a totally different organization and started training programs through advisors.

The transfer of knowhow between the two organizations and passage of members generated a major risk for Turkey. However, the U.S. administration constantly tried to respond to these concerns by saying that they made certain warnings to the YPG about Turkey, which would be sufficient to deter YPG fighters from targeting Turkey. For Ankara, it was not a convincing argument, and the crisis of trust and confidence between the two countries grew exponentially during this period. In the meantime, from PKK attacks on the security forces and from the attempt of some of its members to challenge state authority in different town centers, it became clear that the PKK was actually taking advantage of the relative calm to build capacity to conduct a major attack against Turkey. While the organization was claiming that it was pulling out its members, it was consolidating its position in some of the towns in the southeast. Thus, the PKK's broken promises, its sudden termination of the cease-fires and attacks on security forces left little reason for Ankara to trust the YPG about its sensitivities.

As Ankara's concerns about the YPG and PKK increased, the U.S. has almost become dependent on the YPG in the fight against DAESH. When the PYD started to build relations with Russia, many thought the U.S. would have a negative reaction to this since Russia is fighting as an ally of the Syrian regime, that the U.S. administration called it to step down and since Russia was also attacking U.S.-supported opposition groups. However, instead the U.S. increased its support to the YPG and started almost a competition with Russia to provide more support for the organization. Special presidential envoy for the Global Coalition to Counter ISIL (DAESH) Brent McGurk made a trip to Kobani to demonstrate this increasing support for the group. It was impossible for the U.S. administration not to predict Ankara's reaction after such a development.

At this critical time, the future of bilateral relations regarding the YPG looks more grim than any time before. U.S. support for the YPG now seems to have no clear risk assessment or exit strategy. The assumption is that the YPG will defeat DAESH for the international coalition and will not have any territorial or political ambitions. Turkey's experience fighting and dealing with the PKK projects a different and more troublesome future, which, if not controlled or contained, will have long-term repercussions for the future of bilateral relations.
Last Update: Feb 27, 2016 1:46 am