In Syria, the regime has no limits 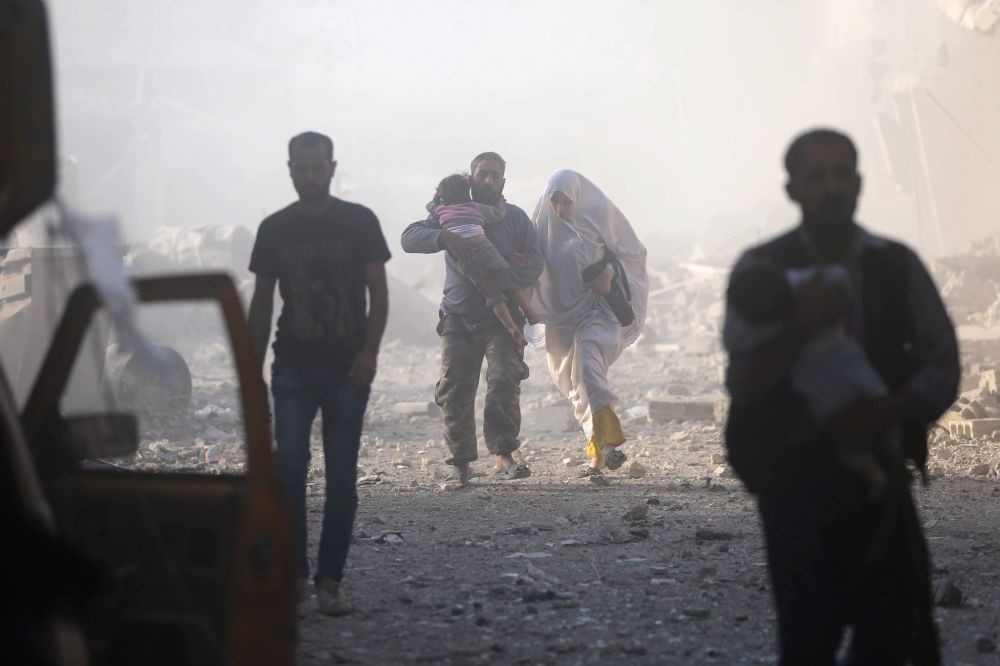 Syrians emerge from a dust cloud following an airstrike on Kafr Batna, in the moderate-held Eastern Ghouta area, on the outskirts of the capital Damascus, Syira, Sept. 30, 2016.
by Kılıç Buğra Kanat Oct 03, 2016 12:00 am

The weakness of the international community made the regime stronger, bolder and more terrifying

Early in the conflict, when the regime started to use live ammunition against peaceful protesters in major cities, statements released by various capitals used verbs such as "shock," "condemn" and "appall." The overall feeling was that no one thought the regime would use such a degree of disproportional force against the civilians in the country. However, the international community failed to act, and Assad considered every instance of inaction as a green light for a more extreme form of violence. Following this, the air forces of the Syrian regime started to bomb population centers to stop demonstrations. Once more, the international community condemned the attacks; however again they expected the Assad regime to be satisfied by the amount of violence it committed. Assad intensified the violence and started to use SCUD missiles together with Shabbiha. SCUDs were used indiscriminately against opposition-controlled cities from the air and from the ground Shabbiha groups exerted a similar degree of violence. The international community was again silent. Barrel bombs inflicted horrendous damage on human lives. It synthesized the evilness of the regime with the dreadfulness of a terrorist organization. The international community and the super power of the free world, the U.S., once more ignored this sign. The "red line" statement by the U.S. administration finally warned the regime not to use chemical weapons. However, this also meant the regime had a "green light" to use conventional weapons to kill people.

The Assad regime quickly learned how to get by red lines and started to test this "red line" by slowly using chemical weapons against opposition forces in early 2013. There were sporadic reports about the use of a diluted form of sarin gas and chlorine against civilians. However, the world did not pay much attention, and the warnings of the opposition and countries like Turkey were taken very lightly by the international community. When the regime launched a full-fledged strike on Damascus using chemical weapons in August 2013, the world was again shocked and condemned the attack. But even this attack did not bring any punitive measures against the Assad regime. U.S. President Barack Obama was very clear in his intention not to target the Assad regime if he decided to conduct military strikes because of the chemical attack. However, later the administration decided not to even attack the chemical weapon delivery systems. The elimination of chemical stockpiles was considered a victory.

At this point, it is not clear if there are any limits for the regime other than the total annihilation of the Syrian people. The Assad regime tested the international community in the last five years and saw that it was incapable of doing anything. No no fly zones, no safe zones, no ceasefires, no meaningful step to resolve the refugee crisis and no solution for the humanitarian catastrophe. In the latest bombing spree in Aleppo, the reaction of the U.S. to the bombings further confirmed this situation. The willful ignorance, the avoidance and the inaction of the international community made a weak regime commit the worst crimes against humanity. The weakness of the international community made the regime stronger, bolder and more terrifying. The state of the catastrophe in the last two weeks demonstrated that the regime will continue to adopt this policy in the coming months. In the absence of a limit, nothing is prohibited for the regime.