﻿As Aleppo falls, so falls the international system 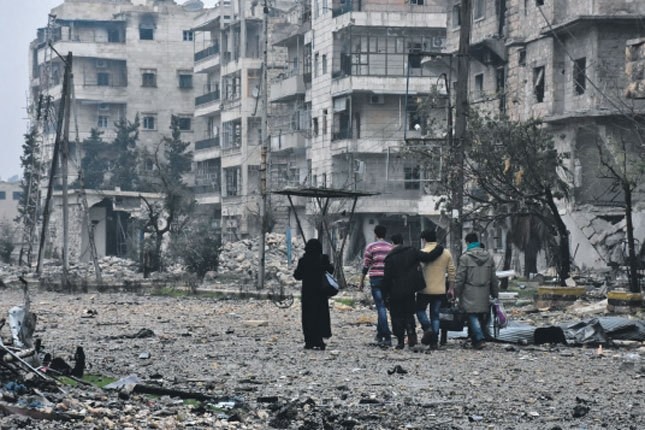 The world witnessed a major humanitarian crisis last week, as regime forces and its allies committed atrocities in Aleppo, along with the inaction of the U.S. and EU and the rhetorical actions of the U.N. Security Council

What we have seen over the last two weeks was nothing new for the people of Aleppo. Although the intensity of the attacks increased considerably, attacks on the civilian population in Aleppo and Syria have been going on for the last five years. The people in Syria have endured shelling, SCUD missiles, aerial bombing and barrel bombings alongside the more vicious crimes of chemical weapons attack and offensives by militias from different countries. While the international community focused solely on the fight against Daesh, the Assad regime and its local, regional and international partners made themselves invisible and committed the most violent crimes against civilians in the country. The siege-and-starve strategy and the bombing of bread factories, humanitarian relief convoys and hospitals have taken place in front of the international community. Every time the regime and its allies saw the lack of firm and resolute international reactions to atrocities, it raised the bar of its violence. The increasing insensitivity of the international community and the inaction of the major powers were considered a green light for the regime, resulting in the formation of a fellowship of bloodthirsty soldiers from around the world.

While we discuss how to deal with the foreign fighter phenomenon in Syria and Iraq, under the very nose of the international coalition, the Assad regime built a multinational crime network. The tragedies and problems that this network generated started being discussed without even mentioning the regime. When the refugee crisis erupted, the international community failed to realize that this crisis occurred as a result of crimes against humanity committed by the Assad regime. They were not running to something but running away from something.

Of course, the failure of international organizations was insufficient for the regime because even under this scandalous failure the regime may not survive by acting against the majority of its population. At this critical juncture, its partners entered the game. The contribution of the Iranian government via the Quds force to train, arm and fight for the regime was unprecedented. Later, Hezbollah contributed. In addition, foreign fighters allowed the regime to escalate its violence. Finally, when even those endorsements and assistance were not sufficient, Russia entered the game to help the Syrian regime.In short, the most well-documented and recorded history of five years of atrocities will provide the perspective required to understand the tragedy. The world witnessed a major humanitarian crisis last week, as regime forces and its allies committed atrocities in Aleppo, along with the inaction of the U.S. and the EU and rhetorical actions of the U.N. Security Council. For months, the Turkish government warned the international community about a potential crisis in Aleppo and that plans should be ready for the worst-case scenario. However, the world was neither prepared nor willing to take any precautions about future calamities. For the anti-Syria refugee sections of society in the West and those who resisted the idea of a "safe zone," this might be a learning experience to understand why these people are running away from their homes and why they are seeking shelter and refuge in other countries. What happened in Aleppo will not stay in Aleppo and will not be forgotten easily. The trauma that the incidents and massacres generated will continue to haunt generations in the Middle East. The super powers will be remembered for their positions and actions during the Aleppo crisis. Maybe after several decades, some leaders will visit Aleppo and kneel in front of a memorial for the victims. But it will not easily clean the stain that emerged in the hearts and minds of the people. The pain, agony and trauma of Srebrenica and Rwanda demonstrate that people do not forget.