Unconventional personal diplomacy between US and Russia 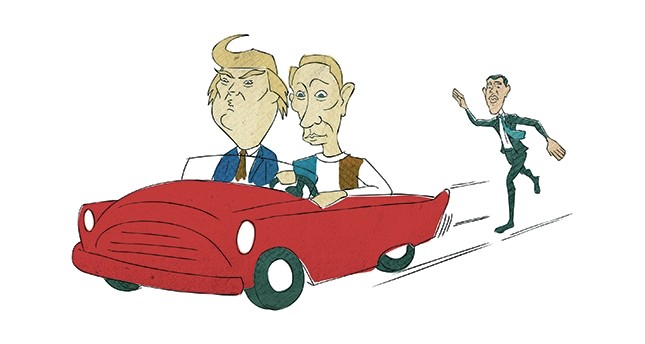 The next U.S. administration is more willing to work with Russia and work on eliminating Daesh threats. However, there is still some ambiguity about the extent of cooperation and whether there will be any joint effort to resolve the crisis in Syria

With the recent intelligence briefing by the intelligence community for President-elect Donald Trump, once more relations between the U.S. and Russia top the agenda of U.S. foreign policy. In a report leaked to the press, the intelligence community asserted, "Russian efforts to influence the 2016 U.S. presidential election represent the most recent expression of Moscow's longstanding desire to undermine the U.S.-led liberal democratic order, but these activities demonstrated a significant escalation in directness, level of activity and scope of effort compared to previous operations." Accordingly, this operation was initiated from the very top of the Russian government. The report stated: "We assess Russian President Vladimir Putin ordered an influence campaign in 2016 aimed at the U.S. presidential election.

Russia's goals were to undermine public faith in the U.S. democratic process, denigrate Secretary Clinton, and harm her electability and potential presidency. We further assess Putin and the Russian government developed a clear preference for President-elect Trump. We have high confidence in these judgments." Everybody was curious how this long expected briefing would influence the approach of the president-elect and his policy toward Russia. However, a day after this briefing, Trump returned to tweet and harshly criticized those who have criticized his outreach efforts to Russia. He wrote in a series of tweets: "Having a good relationship with Russia is a good thing, not a bad thing. Only "stupid" people or fools would think that it is bad! We have enough problems around the world without yet another one. When I am president, Russia will respect us far more than they do now, and both countries will perhaps work together to solve some of the many great and pressing problems and issues around the WORLD!"

These recent developments launched a major debate in Washington, D.C. in regards to the future of U.S.-Russian relations. There are a lot of different scenarios provided by observers of bilateral relations between the two countries. Especially personal relations between Trump and Putin are the most frequently asked issue nowadays. Most recently, after the deportation of 35 Russian diplomats by the U.S. administration when Putin did not retaliate in a similar way President-elect Trump tweeted his reaction to this by writing, "Great move on delay (by V. Putin)- I always knew he was very smart!" Thus, the chemistry between the two leaders after Trump assumes office will be very important for the future of bilateral relations.

However it is important to remember that personal diplomacy will not be the only factor shaping U.S.-Russian relations. In the next administration, there will be serious challenges, risks as well as opportunities for both countries. As mentioned in the previous piece, there will be many variables involved in this process. Of course, foreign policy makers and their different approaches to Russia will be one of the most determining factors of bilateral relations. There are hardliners in the administration, such as Secretary of Defense James Mattis, whose approach to Russia differs from that of President Trump. Secretary of State Tillerson, on the other hand, is well known for his close ties with Russia because of the energy deals that he brokered with Rosneft. He is a recipient of the Russian order of Friendship by President Putin. In the immediate aftermath of his appointment, the opinions of National Security Advisor Mike Flynn on Russia have also become a hotly debated issue.

There are several issue areas that will be discussed in the coming months in relation to Russia. The crisis in Ukraine and sanctions against Russia due to this crisis will be one of them. The members of the administration may have differing views from the administration on how to handle this crisis, and the position of the U.S. will have some important repercussions on its relations with Central and Eastern European states as well as NATO. While the Trump administration tries to make its mind about Ukranian crises, there will also be external determinants that aim to influence decision making in Washington, D.C. For instance, shortly after the elections the Russian foreign ministry made a statement accusing the Ukranian government of trying to influence the elections in the U.S. by sabotaging the Trump campaign. There was a widespread belief that Ukranians were disappointed by the election of Trump due to his views about Russia. Former ambassador of the U.S. in Moscow Michael McFaul even tweeted about this and said, "Biggest loser in the world tonight is Ukraine."

In regards to Syria, some members of the incoming administration are more willing to work with Russia to, in particular, deal with Daesh threats. The president-elect also signaled a similar proposal in the aftermath of his election. However, there is still some ambiguity about the extent of cooperation, and if there will be any joint effort to resolve the crisis in Syria. The safe zone issue for instance was mentioned during the campaign; however, since then there has been no clarification about if and how to adopt such a strategy.

Other issues between the two countries will involve cybersecurity, which looks like one of the fault lines in relations between the two countries. The debate was triggered particularly due to Edward Snowden's residing in Russia, and since then in multiple instances the U.S. administration accused the Russian government of organizing cyber attacks on the American people. After the aforementioned intelligence briefing, it will be important to see precautions by the U.S. and possible retaliation that President Obama ordered.

Another significant issue, of course, will be energy politics. Given the resume of several high-level members of the administration, it is not hard to expect that energy will be an issue that will be frequently discussed by the Trump administration. Although the sanctions, oil prices and carbon fuels became the most frequently mentioned issues in these debates, recently the U.S. is also being more attentive to nuclear security and its dependence on foreign uranium sources for its reactors. Around 20 percent of uranium comes from Russia, and this has recently been reported as a possible significant national security risk factor.

In fact, there will definitely be critical choke points in bilateral relations between the two countries. The main challenges may be between those who want to resolve geopolitical issues with Russia before engaging in further collaboration and cooperation, and those who wants to extend the existing level of economic and, especially, energy-related cooperation between the two countries before handling other disputes. Recent probes and allegations in regards to the hacking of the Democratic National Convention by Russian hackers and deportation of 35 Russian diplomats will definitely be on the agenda, while the administration tries to make its mind about how to approach Russia. It even looks like a search for a new Russia policy may generate serious friction between the Congress and the White House and among different federal institutions in the country or, even more specifically, by members of the administration. This will likely be reflected in the media through different leaks and stories. Competition between different actors may lead to a dysfunctional Russia policy if it is not contained by the administration.