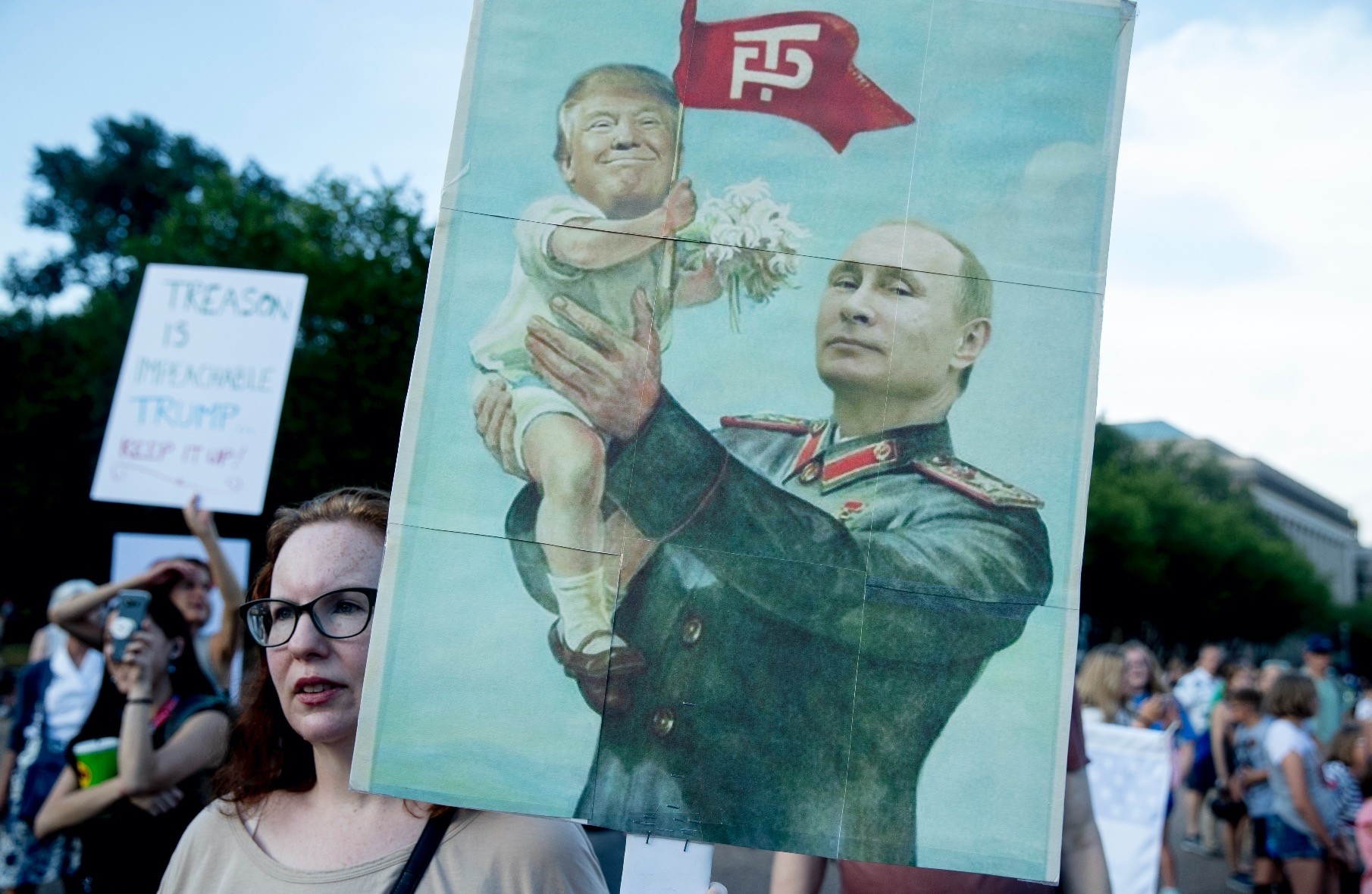 A woman holds a sign satirizing Russian President Vladimir Putin and U.S. President Donald Trump during a protest outside the White House, July 17.
by Mehmet Barlas
Jul 19, 2018 12:00 am

Unless the U.S. president changes his rigid approach to domestic policies, it is unlikely he will be praised or admired by the U.S. media and politicians

The atmosphere at the summit between U.S. President Donald Trump and Russia's President Vladimir Putin in Helsinki was more than positive, as many experts argued there could be some useful ramifications diminishing the possible return of past Cold War conflicts. The statesmen of the two superpowers disappointed the doomsayers and gave a message to the world that the U.S. and Russia are not heading towards a major crisis.

However, President Trump became a target of U.S. social media and politicians again, accused of being a puppet of President Putin and betraying his country and not portrayed as a peacemaker or hero. There are many reasons for this, but the most apparent of them is because of Trump's domestic policies. The U.S. president has been fueling polarization among U.S. society since taking the oath of office. Accordingly, the way of criticizing politicians went too far in the U.S. For instance, President Trump was even caricatured as a dog walked by Putin on a rope. While the dialogue between the two leaders was very fruitful, promising a better future, why was Trump so harshly criticized? Is it because U.S. society demands a war with Russia or is it something else?There are significant lessons to be taken by such criticism in the U.S. When you, as a leader, follow a foreign policy based on the polarization of your internal dynamics, you need to face the absence of terms such as peace, reconciliation and such. If you insult your rivals, as the U.S. president has done many times, and claim that your predecessor administrations betrayed the country, you can be easily dragged through the mud.

The superpower U.S. is now mostly suffering from a lack of conscious and wise politicians, like President John F. Kennedy, or sympathetic leaders such as Ronald Reagan. Washington now has a president who increases tensions, crisis and enmity even towards countries who have traditionally been strong allies in NATO or in the European Union and decreases the volume and quality of world trade cooperation. Thus, the U.S. president is now accused of being disloyal to the country's interests, and is portrayed as a villain cooperating with the Russian leader.

Peace between the two countries, who challenged each other for decades in every field, can be reached with patient and coherent policies and shouldn't be allowed to be effected by domestic ups and downs. As I followed media and articles on the Helsinki summit, I remembered an anecdote in Andre Maurois's book, "Marshal Lyautey." The protagonist of the book, Lyautey, is a famous soldier in the French Empire (1854-1934). Lyautey calls the gardener and wants him to plant a tree in the garden, but the gardener rejects the soldier Lyautey's demand and says that it will take too long for the tree to grow, maybe 100 years. Replying to the gardener, Lyautey says "Then, you should plant the tree right now, we don't have too much time to lose." This is to say, the peace process can be successful with wise politicians who act without delay, take tangible actions and wait patiently.

As a result, if President Trump had the ability to behave as the French soldier Lyautey did, he would be now praised and glorified by the very same U.S. social media outlets and politicians for conducting a peaceful dialogue with the Russian president in the Finnish city on Monday.