Do Americans stand with Ahmed? 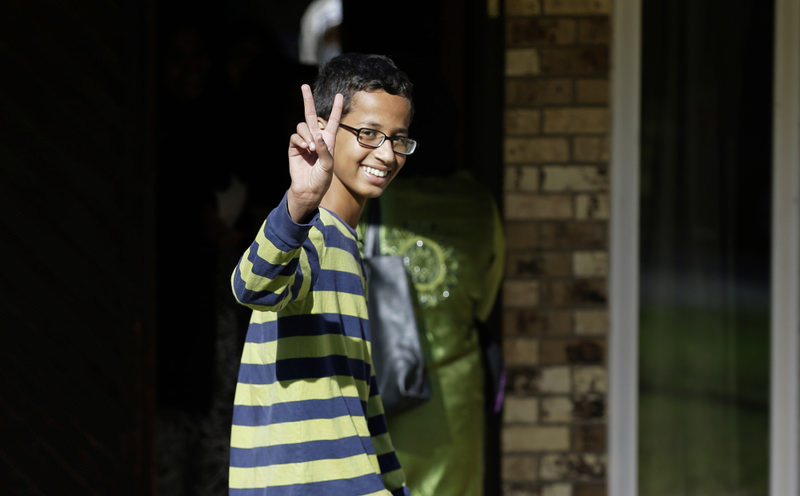 Ahmed Mohamed, who was arrested at school after his teacher thought the homemade clock he built was a bomb, is still suspended.
by Merve Şebnem Oruç Sep 23, 2015 12:00 am

A war on democracy hides behind the war on terror in U.S. policy. The only thing the U.S. has to declare war on is its racial and religious discrimination

When the U.S. government's claim of weapons of mass destruction in Iraq turned out to be a lie, we thought Americans would get angry. When the Abu Ghraib Prison scandal revealed that U.S. soldiers tortured people there, we expected Americans to say something. When the U.S. started to jail thousands of so-called terrorist suspects in Guantanamo without the right to a fair trial, we believed that they would rise up. And when we saw on the news that the U.S. government has been conducting massive, illegal surveillance on its own citizens, we thought that maybe Americans would say enough is enough. We were wrong. Maybe it was good that Americans did not say anything, because if they had stood up to give a message, I am afraid it would have been that they did not have a problem with any of these incidents, since the U.S. has declared a war on terrorism. Lies, torture, prison without a fair trial or any trial, illegal wiretapping and racial profiling - even just one of them should have offended an ordinary American citizen, but there was no indication that they even noticed.

Well, Americans said enough when the global financial crisis that was caused by the greed of Wall Street giants hit them hard, and they put Barack Obama into the presidential office. He promised to close Guantanamo soon, he was against declaring a war on false pretenses and he looked like he would stop racial discrimination with the excuse of terrorist threats. After seven years, he is now about to leave office, but we cannot see the results of any of these promises. Even though the Obama administration has tried to avoid using the term war on terrorism, they have also continued to kill civilians overseas, mostly by drones, alleging that they are hunting terrorists. It is a shame, but Americans have ignored it. The U.S. government could not stay away from Syria as well as other Middle Eastern countries stormed by the Arab Spring, claiming that Americans care about other people's calls for freedom and democracy, but when it actually came time to do something for those people, they said that it is not the U.S.'s job. Again, Americans could not warn their own government and tell it to either go and help or stay out of it. Seriously, is there anyone in the U.S. that has gotten sick and tired of it? Is there anyone feeling a bit ashamed or at least embarrassed of what their government has been doing?

Last week, Ahmed Mohamed, 14, from Irving, Texas was arrested for making a homemade clock that his teacher thought was a bomb. He just made the clock and brought it into school to impress his teacher, but he found in return that he was accused of being a bomb-making terror suspect in a country where white children occasionally get bored and decide to run and kill their friends in school massacres. With his NASA t-shirt and thick-framed glasses, the image of Ahmed being taken out of his classroom in handcuffs has affected many around the world. In a short while, the hashtag #IStandWithAhmed started trending on Twitter. There was global outrage, as what happened to Ahmed is sadly too familiar with the rest of Western Muslims. The wish to impress one's teacher or to be recognized is something that every teenager is looking for. And to be arrested for doing so and treated like a terrorist - is this the American dream, American democracy?

Obama's Twitter account also gave support to the hashtag. He made his Muslim followers satisfied by inviting Ahmed to the White House. Giving a White House chocolate bar to a child who was treated as a terrorist was enough; there was no need to discuss what a farce the understanding of democracy or citizens' rights is in the U.S., while the government of the country has been pioneering and bringing it to everyone else in the world for years with its soldiers, drones and every other way it can find. The U.S. government, in fact, opened the door for that teacher calling the police by abusing the state's power to twist the constitutional freedoms of its people. Anyway, shortly afterward the voices of those who do not stand with Ahmed and choose to stand with racial profiling, discrimination and Islamophobia stepped up to the others. Now many Americans like Sarah Palin and Bill Maher are targeting Ahmed under the pretext of free speech.

I think we must say that there is not just one U.S., there are at least two. There is one where Americans who are liberal, advocates of freedom and democracy and who are open-minded are living, and there is another where the people think their government has the right to limit the people's freedom and believe that their government actually brings democracy with its so-called war on terrorism. I think the latter one is the one that elects U.S. presidents, and there are more people in that America than we think. They find fighting for democracy easier and more important than living for it. Maybe we should start to think about that one more instead of seeing the first one in Hollywood movies or U.S. drama series and buying the American dream.
Last Update: Sep 23, 2015 3:22 pm
RELATED TOPICS